Abadmak Will Make You the Hero of the Revolution!

Well, it is also better said, it will make anyone sincere, any national sincere and any revolutionist sincere to be the hero of the Sudanese next revolution. The specifications of the structural positioning of words and expressions are mine, as a methodological journalist. 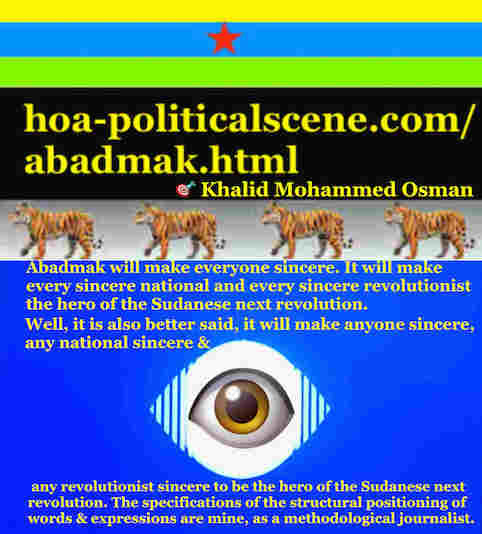 It is important to stress on this enough, before you read the main topic about Abadamak. In fact there are three topics on this page and this is the first one here to get you guidelines to be the hero of the Sudanese revolution and I shall tell you why you need to do that and how to do it.

This is followed by the second topic, which is introduction to the name of the god Abadamac in the second section of the page by a title and its reflection in the Sudanese culture and also its reflection I used in the revolution, to fuel it and in the human rights field to get justice to abused Sudanese people.

It was for the first time in all Sudan, the name of ancient god has inspired human rights activities and revolutionary activities.

... and then this topic is followed by the third, which is about planning together by taking the inspirations of the Sudanese ancient god Abadmak to a further level. 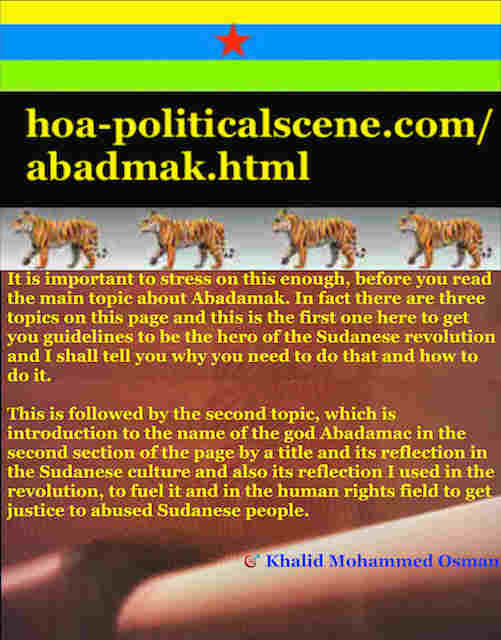 Now, it is clear to you that the ancient Sudanese god as a symbol has positive reflections to better the Sudanese life which is completely destroyed and as we see until now the Sudanese face threats to disappear as a nation.

So, you must understand this, all of my advocacy comes from a long experience not only as a journalist, but also as the first Sudanese to work with the Eritrean revolution and write theoretically about its goals, philosophy and I even invented some of the philosophies of it in my articles, I wrote earlier and included later in my book "Political Tragedy of the Horn of Africa", or simply "Horn Africa's Political Tragedy". 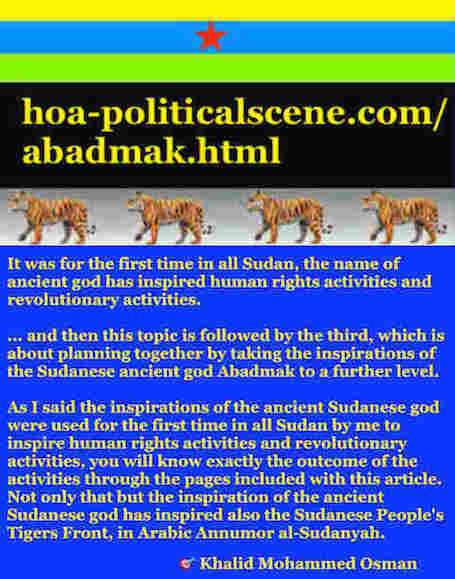 The comprehensive experience regarding Eritrea since the seventies let me study and know everything about the progress of the Eritrean revolution led by the Eritrean People's Liberation Front (EPLF) and I shared and organized many activities especially successful public activities to gather all the Eritrean nation to fulfill plans I arranged in a great project. Read about that at Environment and Environment Protection.

The dynamics of my ideas are enough to implement these ideas in Sudan and you can see that through the reflection of the ancient Sudanese god Abadmak.

This let you know how far am I a methodologist.

Read and understand me right. 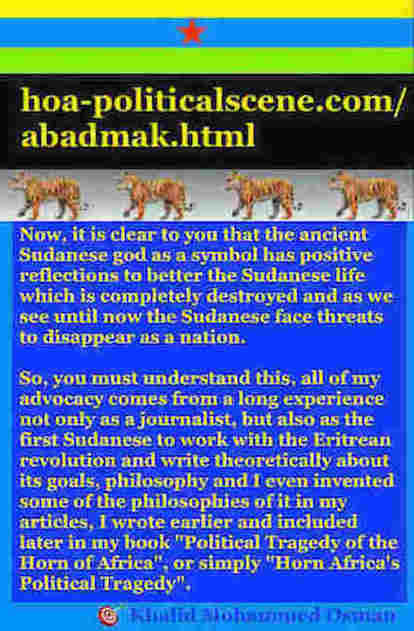 My ideas are the only way out for Sudan to survive, before it disappears because of the conspiring agreement signed by the power of freedom and change and the killer Janjaweed of the military council, which is a remnant of the terrorist regime to share power.

Don't be just like those careless, egoist, or envious who think that I am advertising myself for some personal gains and personal interests. No, I have not any personal gains out of these efforts. My online gain is to save Sudan by creating awareness for the real comprehensive revolution to take place. That is what I am glad for and I am doing since half a century. I am glad and satisfied by what I already have and by my freedom as a retired and I don't want any job.

So, let's us plan together, by taking the inspiration of the ancient Sudan god Abadmak. 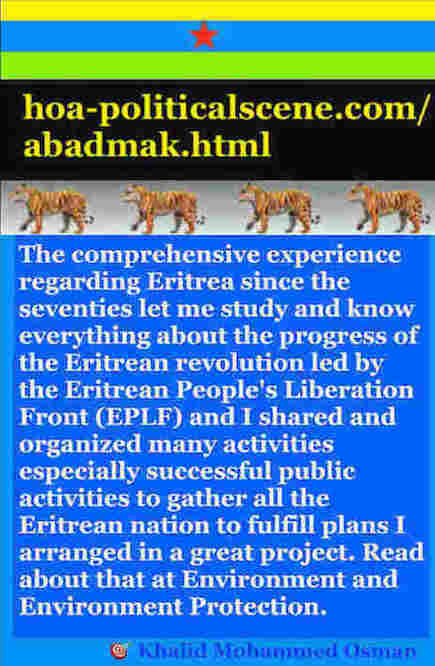 Abadmak from Being a God to Being Inspirational in Culture and Revolution!

Abadmak, or Abadamak, or Abadamac the ancient Sudanese god was a god of the poor, unlike the aristocratic god of Egypt. He has always been the inspiration for a cultural event movement in Sudan, and a inspiring pawn for the modern Sudanese revolution movement. 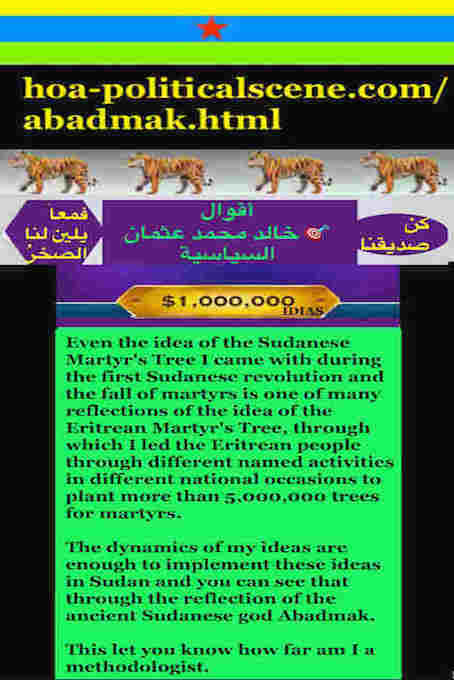 From this historical breakthrough, we inspired him to call it a group of political and human rights activists who gathered in a group to work in the revolution, inspire the Sudanese, to work against the totalitarian regime of the Muslim Brotherhood, and to work in the international spheres of human rights. 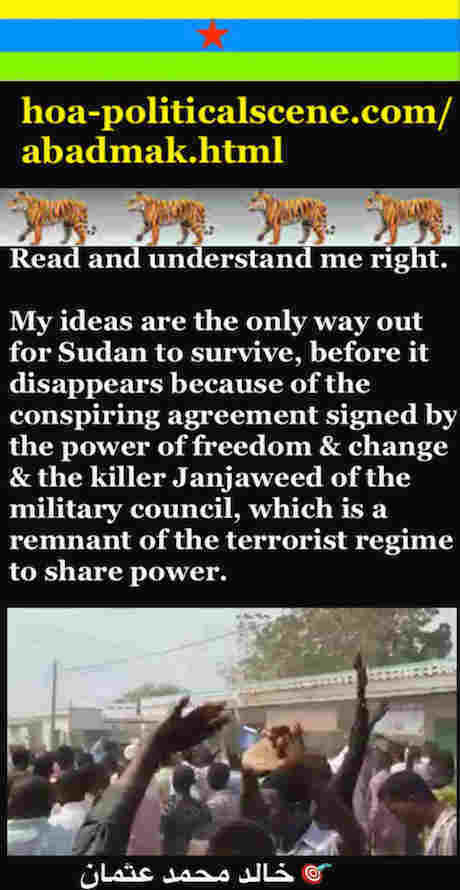 Some of the activities are public and some are for the members of Abadmak and the members of the Sudanese People's Tigers Front. We share the public benefits on the Sudanese section of the Horn Africas Network and on the social media for those who are active there.

Think of a network that starts by grouping people under boards by specific names and then connecting these boards. This makes the grassroots of the revolution to move forward on the grounds. The plan is as the same as the plan of the alleys and squares committees, I suggested building, prior to the Sudanese revolution, and yes the same committees working now and they are working wrong. People even don't know whose idea was the idea of the squares committees! 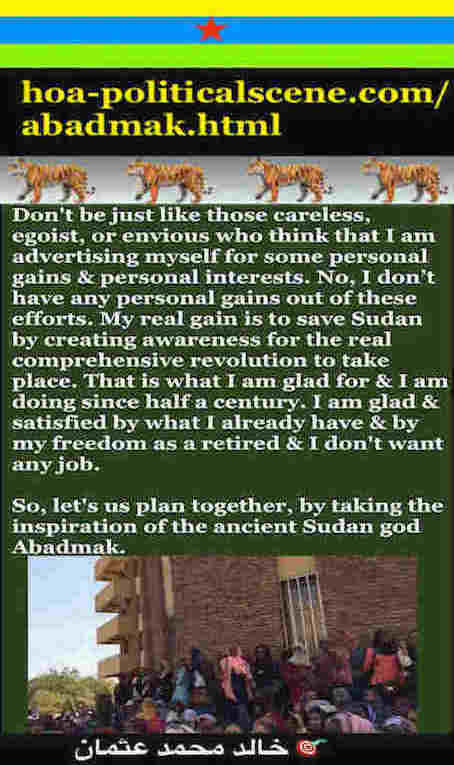 ** Notice: You are required to have a doc folder, for files by the titles of the actions, including list of members with full contact information.

* Getting the most secured connection. (e.g .... is better than WhatsApp).

* Gathering sincere activists you know who have the same opinions to yours.

* Arranging the Execs of the RSBs.

* Equipping them by all required particulars to upgrade and takeover when time comes.

* Making the RSBs a net.

* Making frameworks for the two.

* Planning the actions in the daily schedule.

* Fulfilling the actions in the daily schedule in two areas. 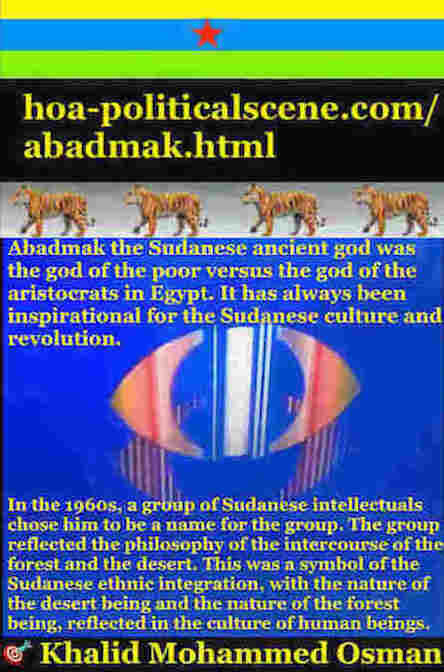 Details of all mechanisms on the entire project are available to members only. However, the complete framework is good for everyone opposing the terrorists in Sudan, angry from the recent outcome of the agreement and not agreeing to the conspiring agreement of the power of freedom and change and the killers of the military council and the Janjaweed banditry in whats called sovereignty council. We had not any sovereignty in Sudan at all, since independence. 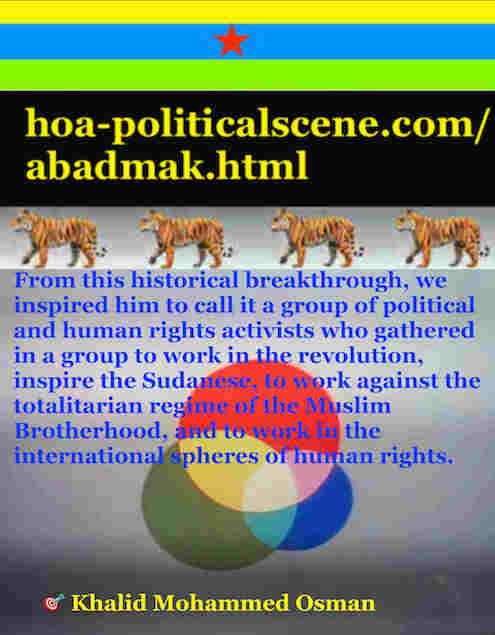 Read the Arabic version at Abadamak.

Most of the activities of Abadamac is on the bottom navigation bar.

You can use the comments form below to participate in Abadmak. Details about you regarding this will be treated confidentially.

You may find documentaries on ancient Sudan on documentary film at TVCinemaApp.com. 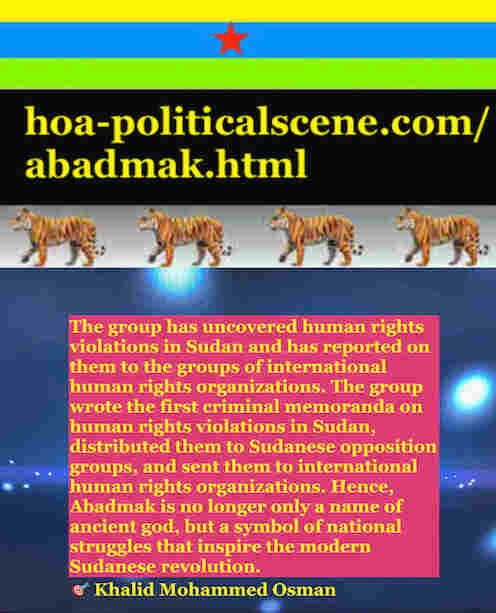