Abadmac Must Get the Revolution Go Viral!

Listen, if you were a Sudanese reader here, you don't need any persuasion, or attraction to the rainbow of this ancient Sudanese mythological god. 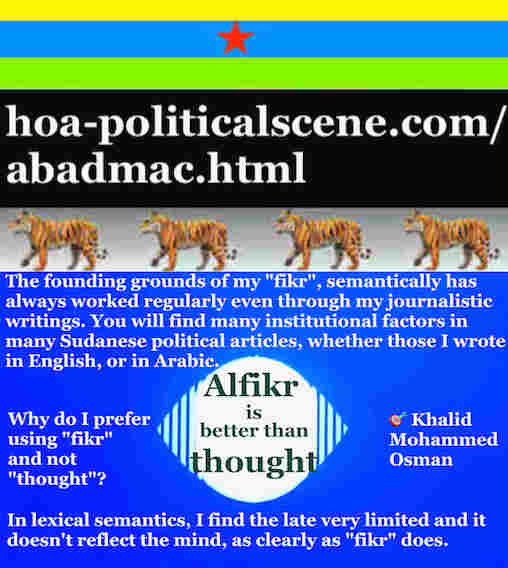 The founding grounds of my "fikr", semantically has always worked regularly even through my journalistic writings, and you will find many institutional factors in many Sudanese political articles, whether those articles I wrote in English, or in Arabic at Sudanese Arabic political articles.

Why do I prefer using "fikr" and not "thought"?

In lexical semantics, I find the late very limited and it doesn't reflect the mind, as clearly as "fikr" does. From "fikr" "afkar" flow in the stream of mind. This flow inspires both literary and political works, as seen on "Afkar Dynmaicyah", with its references.

In fact, this founding "fikr" produced a number of mass action networks, as Abadmak was one of those networks that emerged with the first revolution against the totalitarian, terrorist regime of the National Congress Party, which is one of the wings of the Muslim Brotherhood's Party, formerly the National Islamic Front Party (NIF) of Hassan Abdullah Al-turabi.

Those were the Islamists, who carried out the coup in 1989 to bring Omar al-Bashir and then the satanic octopus party played the spilt of the party into the NCP and the People's People's Conference Party. 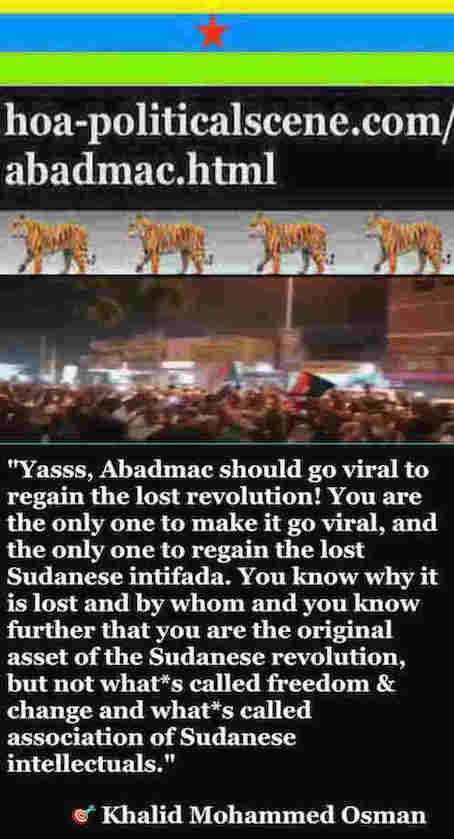 Nevertheless, Abadmac's backgrounds go back to my poetry divan "The Phoenix's Awakening", in one of my poems with the same title, I wrote on 1980 something, during the intifada against dictator Jafar al-Numeri. This refers to an intellectual methodology between the usage of creative writing to creating popular ideas, and participating in popular events by creating popular tools or networking groups.

This conspiring (PFC) climbed to lead the Sudanese rising people by deceiving the masses by false revolutionary mottos and then sold the Sudanese uprising to the remnant evils of the military-religious regime through a conspiring agreement that was not enacted by anyone, and shared the political power with them, under the supervision and blessings of three Arabs conspiring countries, namely Egypt, Saudi Arabia and United Arabs Emirates.

Abadamac has handed over these criminal memoranda on numerous occasions to human rights organizations, the International Court of Justice in The Hague (ICC), and other international bodies. It has also carried out extensive media and publicity work on Social Media, the Horn of Africa Political Scene, and other websites.

These backgrounds I reference about Abadamak give you a clear picture of the size of its broad work during the Sudanese protests, and within the framework of the Sudanese revolution, and the full organization, which accompanied the Sudanese rising, despite the fact that the sudanese movement's efforts for the revolution were contained by the defeatist elements represented in the Power of Freedom and change. 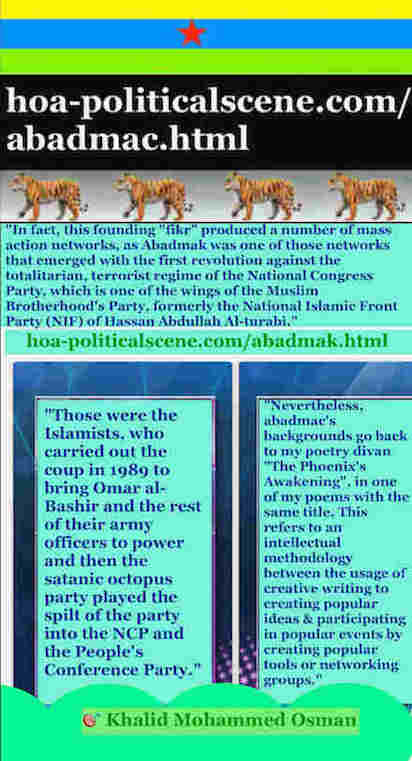 The Veracity of Abadmac Achieves the Virality of the Revolution!

All the visible results of the agreement now, such as:

- the participation of the Janjaweed murderers of the junta,

- the remnants of the terrorist regime in power as members of the Sovereignty Council,

- the failure to activate justice,

- the restoration of the Muslim Brotherhood's power and their demonstrations،

- their demands for participation in political activism, and...

- their stand against the implementation of the demands of the revolution... has positioned Sudan and put it at risk.

All of that you see now is the result of an agreement between the power of freedom and change and the remnants of the former regime, which was paid for by the countries of the conspiring trinity, Egypt, Saudi Arabia and the United Arab Emirates, to preserve the presence of the symbols of the regime of Omar al-Bashir in any future power in Sudan, and to preserve their interests in Sudan. 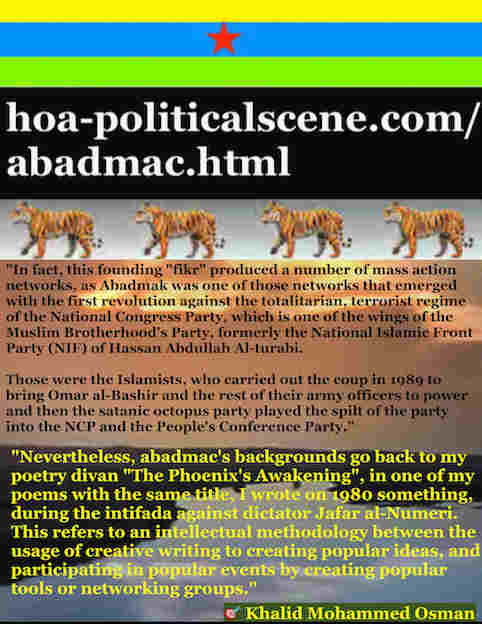 The mistake that many people continue to make is the primary reliance on social media to write and tweet to find out, or expose what's going on. Despite the importance of this work, it is not the only work that will produce the revolution. This means that the main problem is the lack of organizational work, and the fact that large numbers of activists rely solely on writing and tweeting. This will not achieve the desired goals of the revolution on the ground.

We cannot win by such social acts over the huge amount of political confusion and the huge political ignorance even practiced by some of those PhD holders, the failure to activate justice, and allowing the Muslim Brotherhood to work instead of banning it as it is the party against which the revolution was originally exploded and then broken down by the agreement of freedom and change with the Military Council.

We will not win by writing. We must start the political organization again in the same way that we have brought together political activists in the past, taking into account that we must be careful this time and not include any groups that do not believe in what we believe in. This means that we have the organizational reference, which will help us reorganize the real revolutionary manpower.

We are telling you that in the same way that we have achieved the organization of the Sudanese Opposition Coordination, we can adopt a similar system to organize revolutionary groups with their bases in a new style of Sudan's comprehensive and radical national revolution. This time there will be no traitors to sell the revolution to any local or foreign entity as the power of freedom and change did. 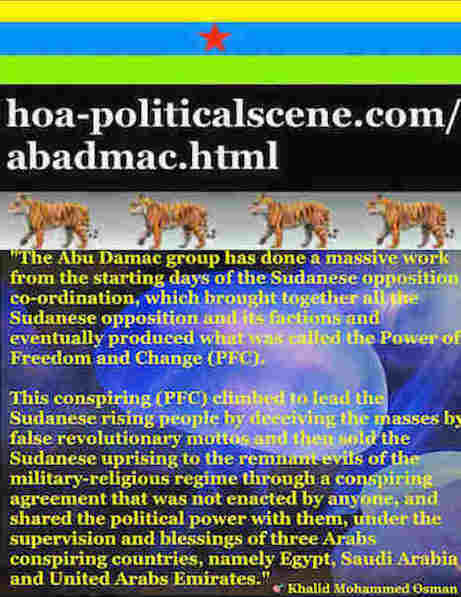 * You can use the form below to write comments on Abadmac.

* You can watch documentaries on Sudan's heritage through which you can understand Abadmac on documentary film at TVCinemaApp.com.