Forced Child Labor is prohibited by international laws internationally, but it's still to be an existing sort of child abuse children face in different places on this planet. There should be enforcement to the international law that prohibits any enforced child labour in the world. 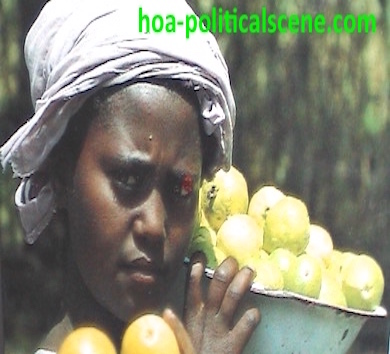 hoa-politicalscene.com/child-labor.html - Child Labor: A picture of a child girl selling fruits on Eritrean streets, pictured by a tourism bureau, to my surprise. It's posted also at Eritrean Political Scene.

Difficulties of poor families and hard conditional survival aren't their problems. They are the problems of the ruling governments and the problems of their parents to find solutions to and face their responsibilities, with courage. Children have rights to live normal children's lives sans any stress.

What about un forced child labour?

It should be prohibited, whenever there is indication that it would be endangering child health, wellbeing and existence. Any child has all the rights to live its life, as a child, until it becomes adult enough, to carry any job, even the simplest and easiest one, like distributing announcements, magazines and newspapers to post-boxes.

This is practiced worldwide to teach children how to depend on themselves and how to carry small jobs and how to experience the markets of such jobs, and how to deal with the money they get from such jobs. In short, to teach them simple responsibilities.

Unfortunately, we found many families in the third world depends on the labor of children to survive in hard economical situations produced by bad governments in the area, except for few countries that have been succeeded to be economical tigers in the area.

Child labour is still to be a sort of first child abuse with many indicators of children exploitation in labor, which deprives children of their childhood and second child sexual abuse, and or exploitation, which is the dangerous and harmful one.

hoa-politicalscene.com/child-labor.html - Child Labor: Although children labor is prohibited by international laws, but it still exists. How to help stopping it? Be activist internally and work with international children's organizations.

Lately the child labor stretched in Africa to force children into compulsory military training to create fronts of child soldiers and the rebels drug them into civil wars using even different kinds of drugs, as we see in Sierra Leone. So, with no indication of any kind of child love, the child security and the child safety are in dangers.

In some countries in Asia the child care is preached by bad treatments of children to force them into child trafficking even to some European countries, where the traffickers make the money from selling children and children face sexual abuse too. See TVCinemaApp.com for movies on trafficking children for the sexual market.

While child labor is a preach to children's rights and the abuse becomes the trend in many underdeveloped countries, many people could find excuses easily by saying that parents could die if their children didn't help.

People there wouldn't probably ask why those parents don't work by themselves. And when accidentally one asks, they might reply by other excuses like that parents are disable to work, either because they are old, or because they are sick.

While this is the picture in the third world, where they use even children refugees to abuse them, we found that child labor exists even in some well developed countries in Europe. Child love becomes a question.

But, they treat it in the modern societies differently, depending on many values the third world lacks, such as justice, peace, security and stability.

From the early eightieth up to the ninetieth, Africa came second to Asia on the map of the World's Childs Labor. The child labor percentage escalated from %17.0 in 1980 to %18.0 in 1985 to %21.3 in 1990 according to the International Labor Organization (ILO).

Eritrea is not present in this report amongst the other African states; nevertheless the percentage of the child labor was high the day the report was conducted.

The social welfare office, led by Shabait liberation fighter Amina Nur Hussain struggled during the first years of independence against the odds, but the ministry neglected the matter afterwards.

That was an organized and comprehensive work for children.

However I couldn't publish some of them online now, as I've lost some of those reports in my archives. Luckily, I found some and I am about to publish those reports I've found.

I should admit that some statements I dded in this report are from my memory. There're moments that I could remember very well.

And here is one of the reports. It is an Eritrean story from the streets of Asmara, at that time when its climate was an European climate, before the warming and the climate change done by unqualified governments worldwide. unqualified is better than to say really stupid, as their policies burn the earth.

A Child Labor Story from the Streets of Asmara!

Her name is Rega't, and she was 13 years old when I met her one night selling beans and local tobacco on the main streets, near some bars. I liked her, as I was missing my daughter, so I gave her double the price of the beans, many times. I also threw more money in her box many times, while telling her to get home, when it gets dark.

She began to like me, gradually and day after day, she began to tell me stories while I was standing beside her, leaning on the barrel of the corner of the bar-block, smoking and watching the smock making some shapes on the air.

Although she did sell these goods 4 hours a day and got home tired nearly at midnight, she hadn't a bean out of it. In stead of getting good words, appreciation, food and rest, her elder brother gave her beans.

Seemingly the term "Child Labor" was unfamiliar. She told me that her elder brother was the direct and sole responsible person for her family, so she took his orders seriously, because when he gets angry, not only his mind, but his hands git toughest than the stone to slap even those who have done nothing bad to him.

One night, I was trying to confess her to get home at that moment, because it was getting dark, and because there were some gangs who were trying to chat with her using some dirty words, that I didn't believe she understood them.

But she told me she's used to hear those words, and even there were some boys who tried to touch her. She said she was not afraid, and that it was easy for her to fight them.

When I advised her to tell her brother about all of this, she said he didn't care the first time she told him in an attempt to confess him to stop sending her out by night. In stead he told her that she could learn something from those boys.

I decided to speak with her brother, so I told her that I'll accompany her home. I told here that I am in a position to stop him, or even send him to prison.

Along the way, while I was hearing her telling some of her stories, she stopped suddenly and requested me to stop and return home. She was very afraid at the moment we were near her home.

So, understanding the situation I thought for a while and told her I'll reach her brother in a way that he will never think I'd spoken to her.

I then asked her where I could find him. She gave me his name and his work address. She described him to me when I asked her to do so.

"Next time..." I told her "could you gather three or four sellers from your street mates to chat with them." She said yes, and I said: "far well, take care."

All the way to my home I thought of those who were playing with those kids on the shady corners, corridors and cinema; and even inside some bars.

If you're looking for help to do any kind of network against child labor, or another humanitarian network, I am just right here beyond those lines, too close to you to close you in this humanitarian circle, if you want to do any activities like those I am doing right here. Use the Contact Us form and tell us what help you need.

In addition to Child Labor, you may also be interested in the following humanitarian articles, which are parts of Khalid Mohammed Osman's Network:

Tell us what you think of child labor on comments, or write us stories on child labor in the comments form below.

You can also watch child labor on TV documentary film at TVCinemaApp.com.

Comment C2 Entries on CHILD LABOR appear on the page section above this paragraph and below the comments form.