Khartoum Tweets, as the whole of the valley of the Sudanese Nile Tweets to overcome and recover from the psychological and moral pain caused by the deteriorating political situations in Sudan! 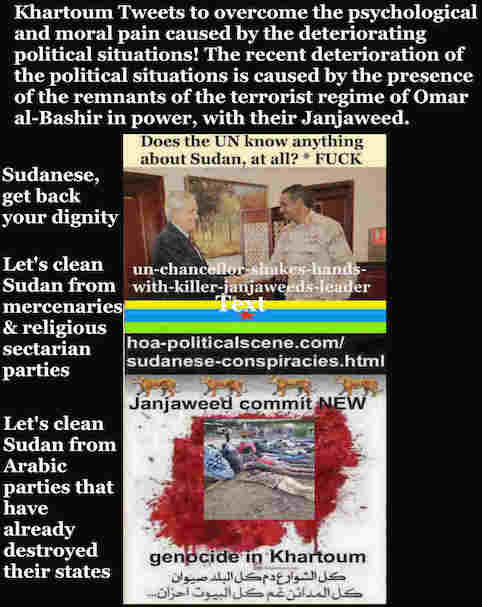 The recent deterioration of the political situations is caused by the presence of the remnants of the terrorist regime of Omar al-Bashir in power.

It tweets with all of the pain it has to expose the criminals in power who are continuing to open Sudan to the conspiracies of Egypt, Saudi Arabia and the United Arab Emirates.

It tweets painfully to clean the dirt of the criminal remnants of the terrorist regime with their Janjaweed.

Those are the criminals who were essential elements of the version of the Muslim Brothers Party named the National Congress Party and led by the International criminal Omar Hassan Ahmed al-Bashir. 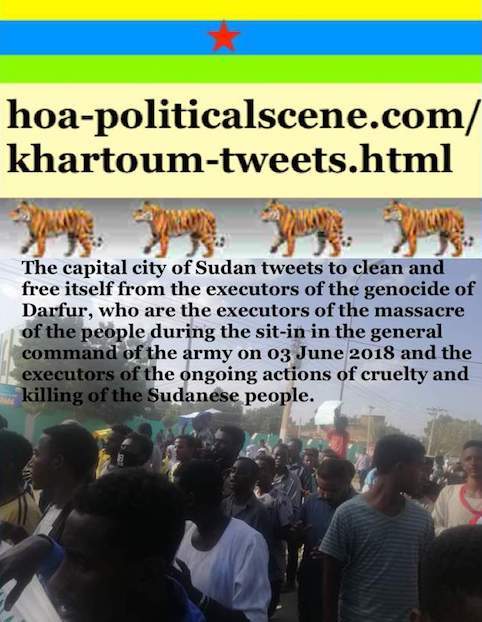 They are the criminals who are holding the actual power in what's called the sovereignty council and ruling Sudan right now in behalf of the Muslim Brothers Party, which is the real founder of the international terrorism.

In fact, the world's eyes are blind, because the international players in this matter are holding facts to themselves. There is no credibility in this political issue and no transparency.

To my surprise this ignorance of the issue is still going on despite the fact that many documents and recordings even in videos have spread on the net about the issue.

But, although most of what has been covered in these documents is true, the missing is the information about the real leaders of international terrorism and the founders and why they are carrying out a periodical plan to do the cleansing of the Sudanese people from their land.

The original founders are in the Sudan's wing of the Muslim Brothers Party, with all of its names which are planned to present a chaos in Sudan and blind the nationals and the international world. 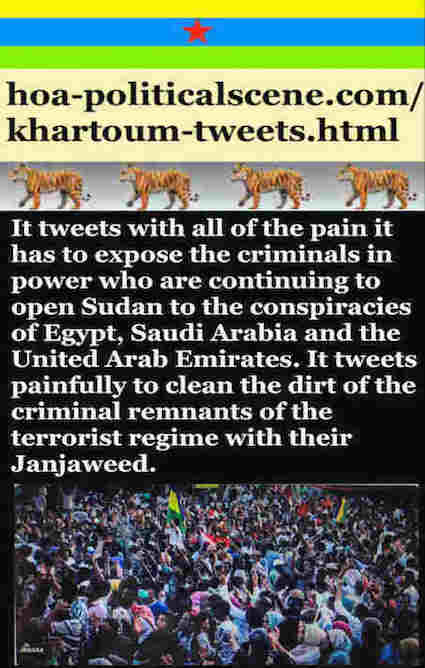 The pain in the Greek tragedy derived from ancient Greece and Asia Minor, which reached its distinctive form in Athens in the fifth century, paving the way for the existence of the western civilization, this pain is now pragmatically and seriously and distinctively growing in Khartoum, whose tragedies are created by the Muslim Brotherhood with their Janjaweed banditry in Sudan.

Therefore, Khartoum Tweets in a unique way to overcome the psychological and moral pain caused by elements of the Muslim Brotherhood during their leadership of Sudan in thirty years!

But, from where did they come? 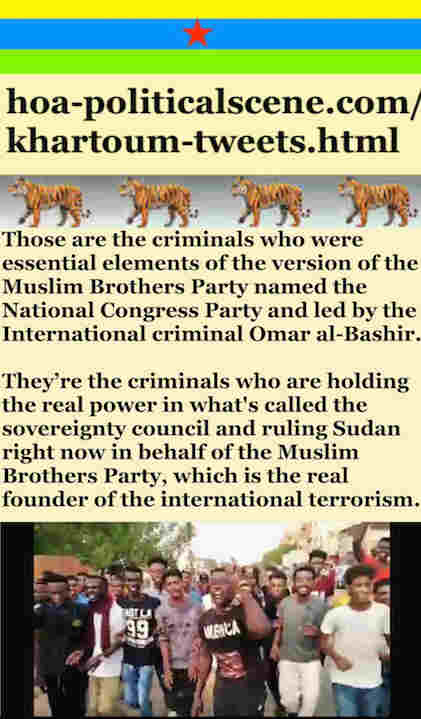 From Where Did the Muslim Brothers Come?

I imagine... well, sometimes, imaginations make realities, if you could only get yourself inside between imaginations and realities and this requires a great deal of literature and pure senses.

However, everything starts from phenomena as we know through scientific discoveries. But here we are not faced with natural, but political phenomena.

The Muslim Brotherhood as political phenomenon was actually very strange to be present in Sudan, as supposed that time to be in great parts of it a Muslim country, so it doesn't need to have a Muslim party. Neither was Egypt, according to its last Islamic history. 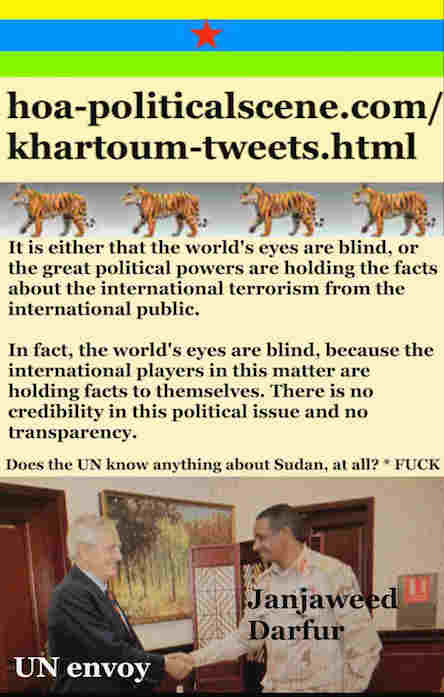 So, Why Founding a Party for Muslims in an Already Known State as a Muslim State?

Sudan isn't factually a Muslim state... but, that is what has been made of it by religious and sectarian parties and they have aliened it with Arab countries without having the people to constitutionalize on these serious matters.

So, this is obviously what the headline above is incorrect and it is only run with the thoughts of those right wing parties to criticize their role of damaging the multiethnic and multicultural image of Sudan.

This is from where the real political problems have started and ignored through decades and decades of brainwashing the masses and developing the methods of political mentality absenteeism to keep great numbers of the Masses loyal and under the jubbahs of the Islamic characters of those religious and sectarian parties.

This is going seriously to the point... until then (the next revolution), continue this page on the Sudanese Nile Tweets, read the Arabic version of it at Khartoum Political Tweets and keep visiting the associated links with Khartoum Tweets. 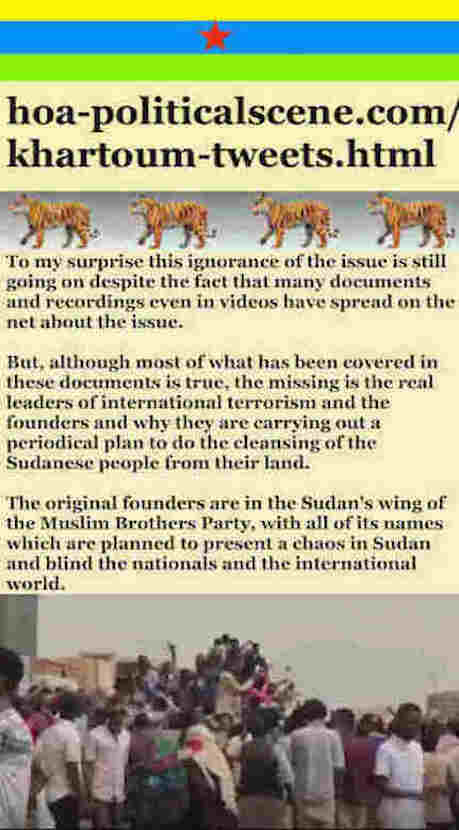 In Addition to Khartoum Tweets... 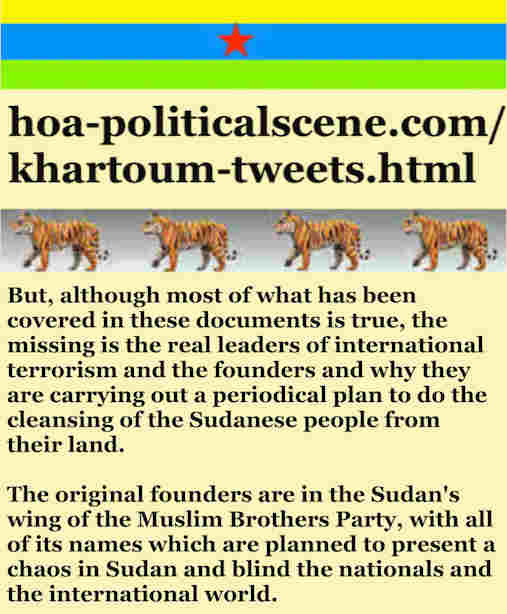 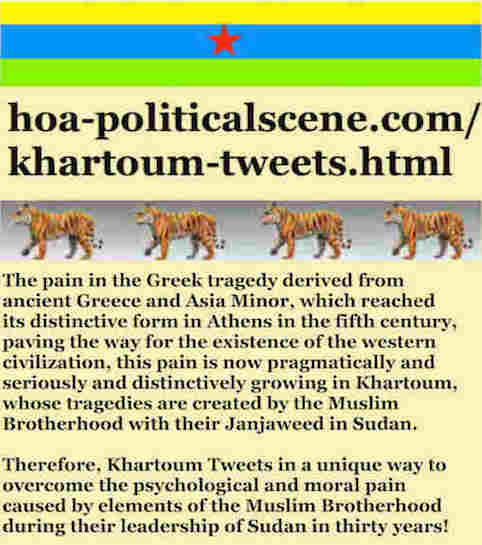 Write comments on KHARTOUM TWEETS in the following form. Make sure to enter your email in the secure page to receive notifications about comments on your entry.

* You can watch documentary movies on Sudan, when you get from Khartoum Tweets to documentary film at TVCinemaApp.com.

Comment C2 Entries on Khartoum Tweets appear at the section of the page you see below the comments form and above this paragraph.