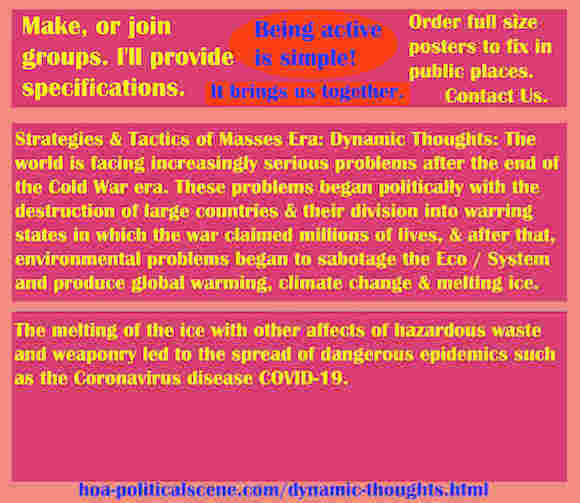 hoa-politicalscene.com/dynamic-thoughts.html - The Strategies and Tactics of the Masses Era: Dynamic Thoughts: The world is facing increasingly serious problems after the end of the Cold War era. These problems began politically with the destruction of large countries and their division into warring states in which the war claimed millions of lives, and after that, environmental problems began to sabotage the Eco / System and produce global warming, climate change and melting ice. The melting of the ice with other affects of hazardous waste and weaponry led to the spread of dangerous epidemics such as the Coronavirus disease COVID-19.

The lights on these comprehensive problems get through analyzes into awareness about the causes of these problems and the circumstances they create global, which heavily impact the masses in every place in the world. They reach the era through which these problems are exacerbated.

The two eras of the analyzes are the Cold War era and post Cold War era, which is now called the New World Order. They prove that the last era is in fact New World Disorder. Evidences to this statement are that the world has been affected badly by ending the Cold War. 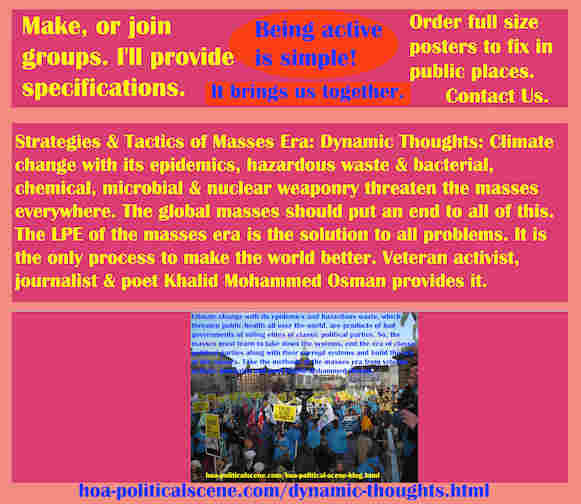 hoa-politicalscene.com/dynamic-thoughts.html - The Strategies and Tactics of the Masses Era: Dynamic Thoughts: Climate change with its epidemics, hazardous waste and bacterial, chemical, microbial and nuclear weaponry threaten the masses everywhere. The global masses should put an end to all of this. The LPE of the masses era is the solution to all problems. It is the only process to make the world better. Veteran activist, journalist and poet Khalid Mohammed Osman provides it.

Through the ending process big states has been fragmented into pieces, many new states are formed after severe wars between their citizens and millions of victims and the flow of conflicts in other parts of the world are continuing to grow. Most importantly, ending the Cold War has paved the way for international terrorism. It is well known that one international power has raised international terrorism through the Afghani gate.

But, not only all of this political deterioration was the result of ending the Cold War. Climate Change has been produced to strike nature too by the destruction of the global ecosystem and epidemics have exacerbated. 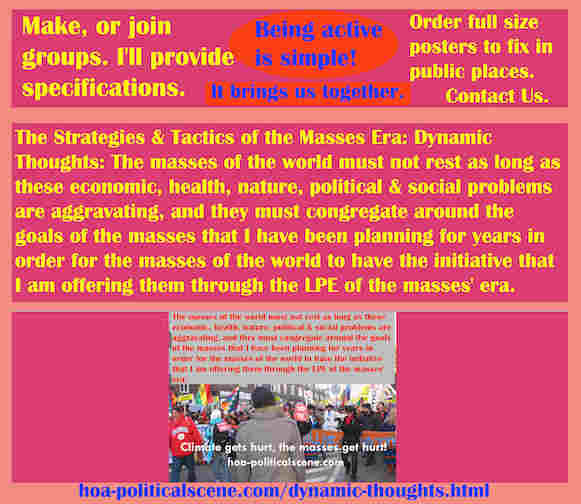 hoa-politicalscene.com/dynamic-thoughts.html - The Strategies and Tactics of the Masses Era: Dynamic Thoughts: The masses of the world must not rest as long as these economic, health, nature, political and social problems are aggravating, and they must congregate around the goals of the masses that I have been planning for years in order for the masses of the world to have the initiative that I am offering them through the LPE of the masses' era.

TO DO SOMETHING ABOUT THEM ALL is the goal of HOA's Dynamic Thoughts and the combination of global dynamic ideas, which dynamic thoughts have risen from to assemble the world masses in the framework of the Horn of Africa's Network.

The framework is done for the global masses and it is called the LPE of the Masses' Era.

Well, we have two eras which have proved to be complete failures and led the world to bad situations. Now, we need a fresh era and that era should be the Era of the Masses.

How to work out and implement this era is all explained through the LPE of the Era of the Masses. 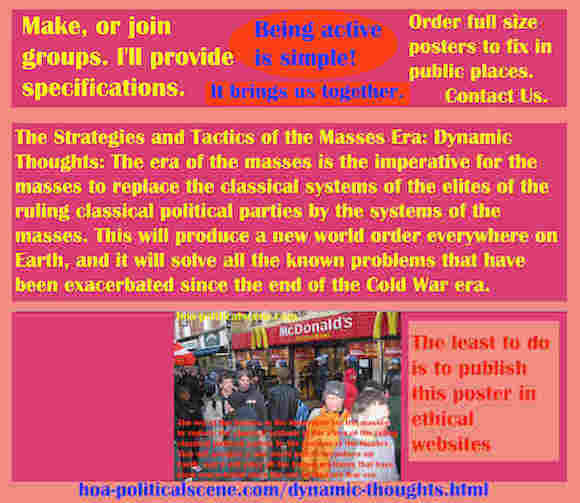 hoa-politicalscene.com/dynamic-thoughts.html - The Strategies and Tactics of the Masses Era: Dynamic Thoughts: The era of the masses is the imperative for the masses to replace the classical systems of the elites of the ruling classical political parties by the systems of the masses. This will produce a new world order everywhere on Earth, and it will solve all the known problems that have been exacerbated since the end of the Cold War era. 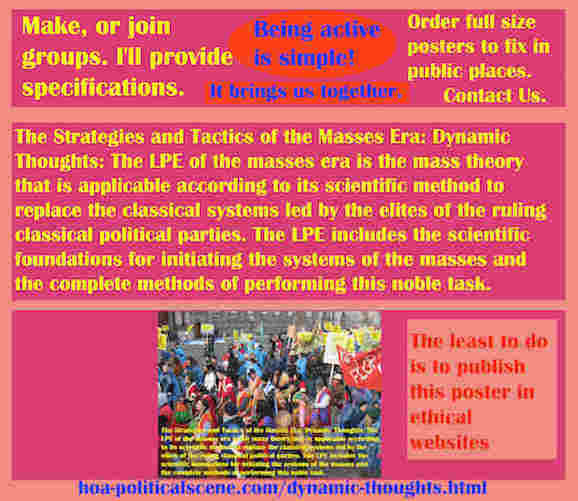 hoa-politicalscene.com/dynamic-thoughts.html - The Strategies and Tactics of the Masses Era: Dynamic Thoughts: The LPE of the masses era is the mass theory that is applicable according to its scientific method to replace the classical systems led by the elites of the ruling classical political parties. The LPE includes the scientific foundations for initiating the systems of the masses and the complete methods of performing this noble task. 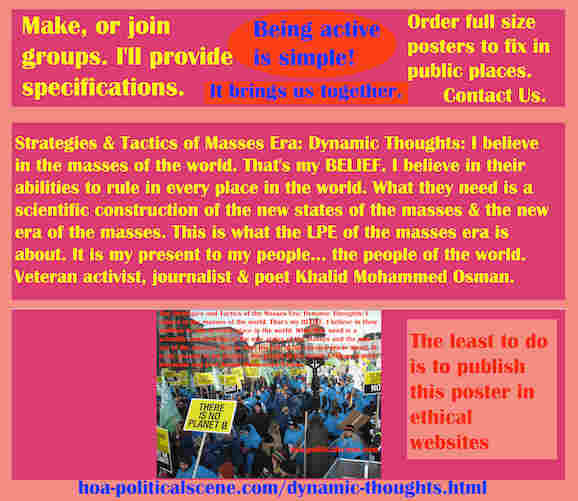 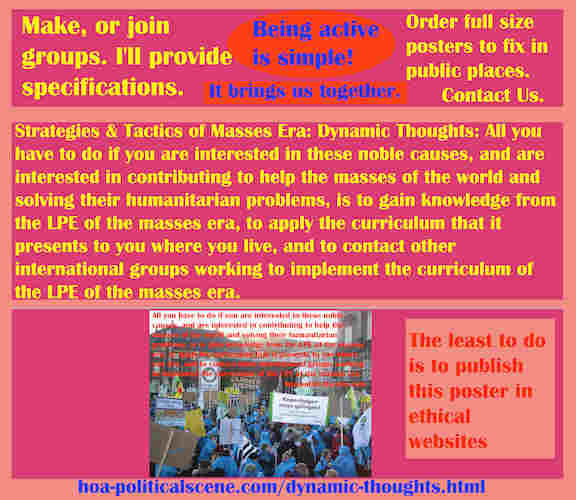 hoa-politicalscene.com/dynamic-thoughts.html - The Strategies and Tactics of the Masses Era: Dynamic Thoughts: All you have to do if you are interested in these noble causes, and are interested in contributing to help the masses of the world and solving their humanitarian problems, is to gain knowledge from the LPE of the masses era, to apply the curriculum that it presents to you where you live, and to contact other international groups working to implement the curriculum of the LPE of the masses era.

Dynamic Thoughts Came with 3 Mechanisms for the Sudanese Revolution ... 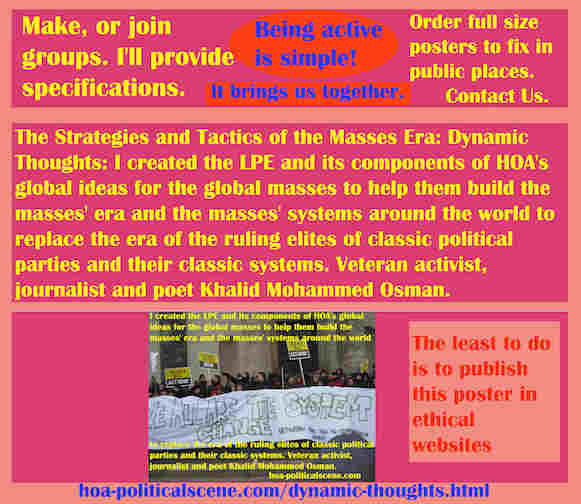 hoa-politicalscene.com/dynamic-thoughts.html - The Strategies and Tactics of the Masses Era: Dynamic Thoughts: I created the LPE and its components of HOA's global ideas for the global masses to help them build the masses' era and the masses' systems around the world to replace the era of the ruling elites of classic political parties and their classic systems. Veteran activist, journalist and poet Khalid Mohammed Osman.

Thoughts Stripped the Conspiracies of the Muslim Brothers, the Founders of International Terrorism . 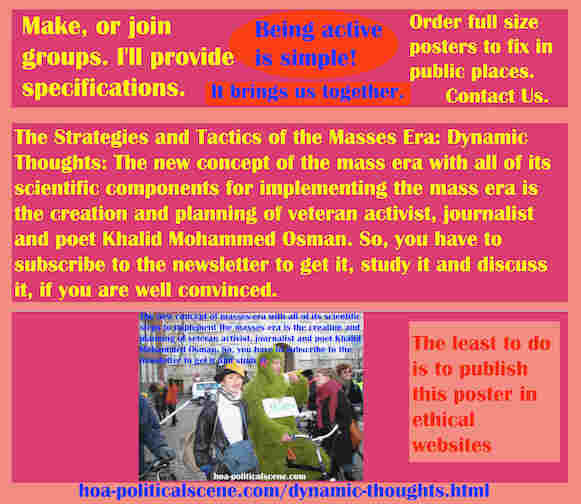 hoa-politicalscene.com/dynamic-thoughts.html - The Strategies and Tactics of the Masses Era: Dynamic Thoughts: The new concept of the mass era with all of its scientific components for implementing the mass era is the creation and planning of veteran activist, journalist and poet Khalid Mohammed Osman. So, you have to subscribe to the newsletter to get it, study it and discuss it, if you are well convinced.

You are obliged to yourself to become a good citizen of the world by following these dynamics to learn how to be and that by solving the problems of the world. To do this, subscribe to HOA Political Scene Newsletter and confirm your subscription and use the Contact Us form to indicate that you are interesting in the good Citizen of the World project and want to know how to learn the Masses Era's project and how to implement it. 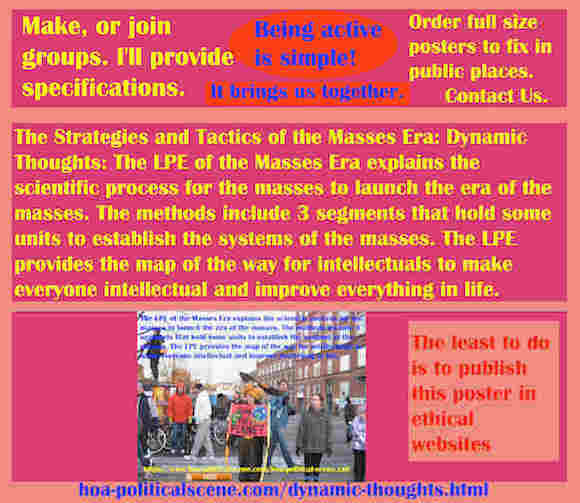 hoa-politicalscene.com/dynamic-thoughts.html - The Strategies and Tactics of the Masses Era: Dynamic Thoughts: The LPE of the Masses Era explains the scientific process for the masses to launch the era of the masses. The methods include 3 segments that hold some units to establish the systems of the masses. The LPE provides the map of the way for intellectuals to make everyone intellectual and improve everything in life.

HOA's Dynamic Thoughts in Other Languages!

The connotation of the Romanian description is: We are the masses, we elect governments, as long as they do not work for us, so we take power and change political systems NOW. We do this by implementing political education with the LPE methods of the mass era offered by veteran activist, journalist and poet Khalid Mohammed Osman.

The insights of the Romanian description are: It is time for the masses to take power everywhere to end the era of the ruling elites of the classical political parties and to build the systems of the masses to replace the classical systems. This will solve all the problems of the planet. To do this, the masses must take the LPE of the mass era from veteran activist, journalist and poet Khalid Mohammed Osman.

Have Comments on Dynamic Thoughts?

Use this secure form to write comments on Dynamic Thoughts. Thanks. I'll be in touch with you, as soon as you submit the form.