The Sudanese rising has difficult goals to achieve, indeed, no matter how far it's successful. Until there are national plans in place to exclude the religious and sectarian sects, no way.

You may wonder what these goals the revolt in Sudan must achieve. Of course, they are not just about throwing out the military religious regime of what's called the National Congress Party, led by the Sudanese criminal Omar al Bashir. 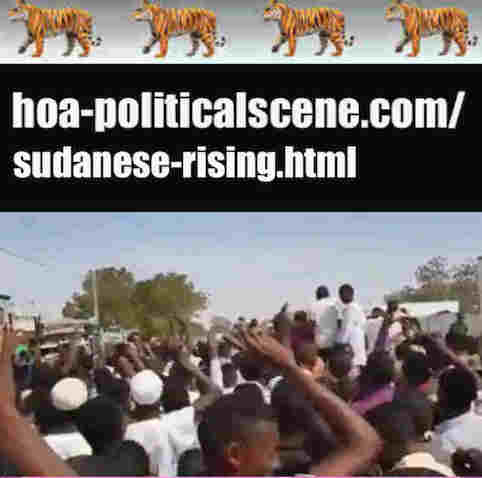 Intro to the People's Rising in Sudan!

This page you are about to read has difficult challenges for Sudanese. For others, it highlights what happens in Sudan nowadays in the revolution and rising up in Sudan, to conquer Sudan's enemies after long decades of Sudanese failure.

But, to conquer the enemies is not that all we need from the Sudanese rising. First of all, who are the enemies of Sudan?

You'll learn about that. But, even before reading absolutely invaluable story here, it's worth to know the following:

The Sudanese rising on this page is part 5 of a very long political story about Sudan and what happens there. Since the article is long and in facts it makes a book, I think to publish sooner, I divided it in the HOA Political Scene Network into five parts.

You'll find the book sooner with other books at the right column. It might have already been published, if you are reading this article after 22 February 2019. 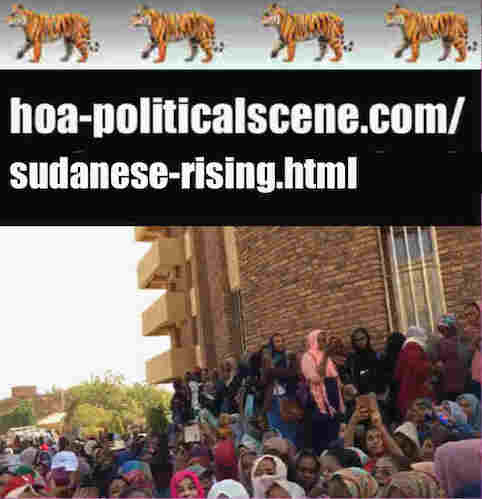 In the Sudanese uprising page, I ended with enlightenment on the participation of ABADAMAC Cultural Union in the Sudan's rising events. Here, I continue with that role of ABADAMAC along with the other Sudanese political groups to achieve the success of the Sudanese rising.

Continuing the Role of ABADAMAC in the Sudanese Rising!

* Before reading this, if you have any role as a political group in the Sudanese rising, share your efforts through the comments form at the end of this page. Thanks.

This is a continuation to what you have read on the Sudanese uprising page.

To eliminate any confusion made by the ruling Muslim Brothers, we continued to say that the planned scheme of the Muslim Brother in Sudan was clear when they spilt.

They spilt into National Congress party, led by the criminal Omar al Bashir and People's Conference Party, so we siad that was just another scene in the sarcasm of the Sudanese political theatre and it's part of the Sudanese Political Caricature.

Not only that, but we continued to enlighten the conspiracy theory in Sudan, as it is primarily the active part of the Muslim Brothers' Conspiracy Theory to rule Sudan for ever and rob its treasury.

Going on with such national efforts, we at ABADAMAC arrived at September commemoration for the martyrs of September revolution, with great ideas. In fact the ideas preceded that event.

One of the ideas is on how to organize and come up with different public events to celebrate the virtues of the Sudanese martyrs in special day called the Sudanese Martyrs Day, with some good public activities.

The most best of all those ideas is the idea of the Sudanese martyrs Tree, I invented from my environmental activities in Eritrea, immediately after the independence of Eritrea from Ethiopia.

See environment and environment protection to know how great ideas like the idea of the martyr's tree has succeeded and achieved planting more than 5,000,000 martyr's trees in a matter of only few months, and how it built Eritrea its environment organization!

The idea of the Sudanese Martyrs Actions is to encourage public sharing in planting trees by the names of September martyrs and continue to celebrate every martyr by planting a tree for each martyr in every memorial of anyone killed by this bloody regime.

That means the celebrations will continue through public activities that rise as a secret weapon for the Sudanese rising from the idea of the martyr's tree and through the Martyr's Tree Project.

In addition, there would be a day for celebration in every month and that's because there's no month in Sudan left without having the people to lose someone dear, by either being killed, or imprisoned and died from torture.

Using September events to commemorate the September martyrs was one of the strategies in the framework of the September events, thought by ABADAMAC to eliminate the Sudanese terrorists regime, no matter that the people didn't go with the ideas, although many activists in the revolutionary groups have appreciated the ideas. 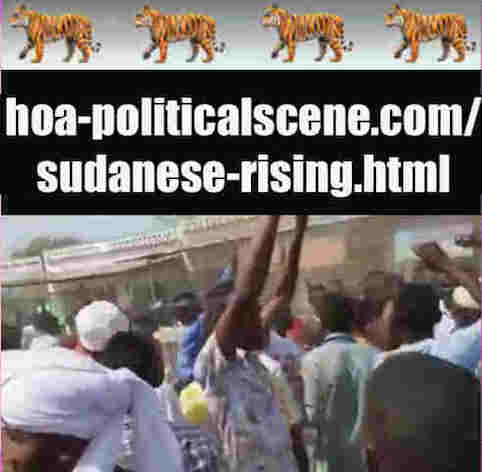 Prior to any other Sudanese revolutionary group, ABADAMAC, rose as the phoenix rising and began to come with revolutionary ideas.

Through the Sudanese National Anger Day, ABADAMAC has made it clear that we need urgent strategies in the framework of September uprising, as it appears in Arabic at Invitation to Comment 31 - استراتيجيات في اطار فعاليات سبتمبر للقضاء علي الارهابيين في النظام السوداني. 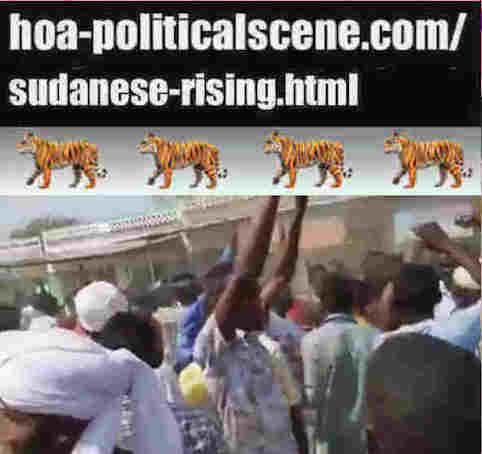 In fact, after 2001, plans have been in place to go further with political enlightenment in Sudan and explain exactly how to Pick Up the Uprising Now.

No matter what the security agents of the Sudanese dictatorial regimes do to strike demonstrators, bomb them, imprison them and torture them to death, there's always a way out for the Sudanese rising to succeed.

At the same time, we urged that the picket will paralize, or make the autism of the regime clear and we said that there's no way-out for the Sudanese regime and we shouldn't ever forget and forgive, as it appears in Arabic at (Are You Intellectual 55: لا مخارج لنظام القمع الكيزاني ولا عفا الله عما سلف). It worth repeating that to remember well. 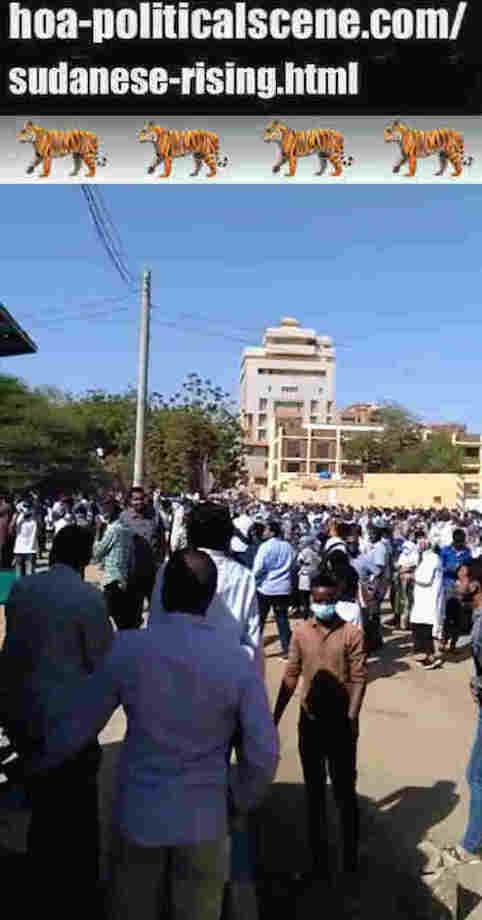 Before the full implementation of the so called Sudanese Comprehensive Peace agreement with the movement of South Sudan, which has proved that it wasn't comprehensive, and during the time of the Referendum in Southern Sudan, ABADAMAC has discussed in may political articles the outcome of such political scam in Sudan.

The real existence of a new Sudan, not as the Sudanese People's Liberation Movement (SPLM) hopes, but it is really in the virtues Sudan has in its stretch to million square miles, or as I explained in many articles, such as Invitation 1 HOAs Friends: Beautiful Existence is in Kindness, Love and Unity in the One.

When the Sudanese National Committee for Civil Disobedience and Change (Khalas) issued a statement in Arabic (Are You Intellectual 68: بيان اللجنة القومية للعصيان المدني والتغيير خلاص), more political powers has joined the actions of the Sudanese revolutionary youth.

Immediately after these activities in the mass of the Sudanese rising, human rights organization issued various condemnations and called the international community for taking international actions against the Sudanese totalitarian regime. 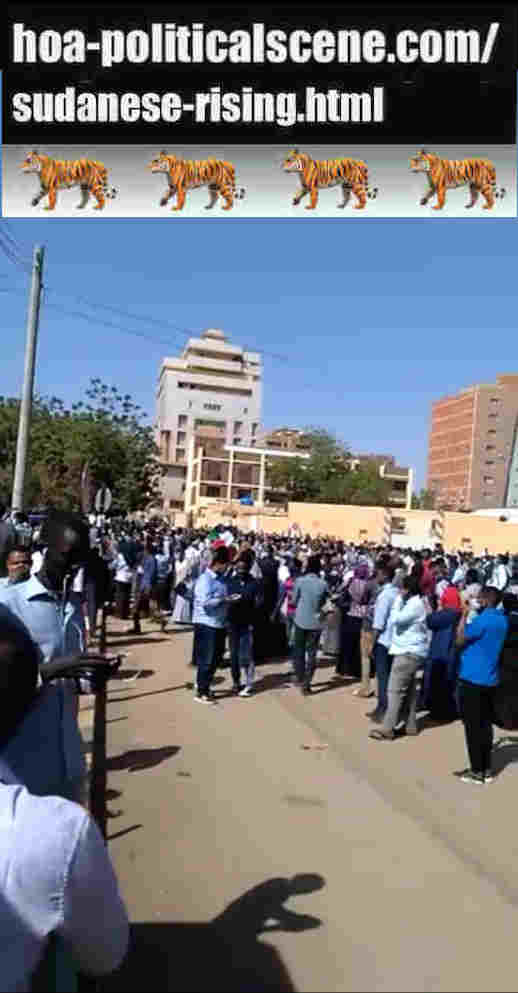 In fact, the first memorandum was damaged. When forwarded to me for editing and translatng, I achieved the two process, professionally, returned the copy to my political group and took copies from it to distribute it with ABADAMAC memoranda to my resources in the human rights organizations.

I urged the group, as well as ABADAMAC, which I have created to use relevant organizations, such as those for children, women, as gender issues and organizations for journalists and social welfare. I did that for my first group ABADAMAC.

A well known political female fighter in the Sudanese Communist Party of Sudan (SCP) died during the Sudanese people rising in London. I had been overwhelmed by sadness and sorrow, not only because I knew her, but also because I knew her hard struggle and I have been dreaming of that day the communists will rise someday, especially during the military movement for correction in July 1971. That's another story.

Those articles were followed by publishing a remarkable article by the Sudanese veteran fighter Kamal al Jazouli Titled "Fatima: In the wave of eternal farewell", in Arabic (Invitation to Comment 37: فَاطِمَة: فِي تَلْويحَةِ الوَدَاعِ الأَبَدِيِّ). 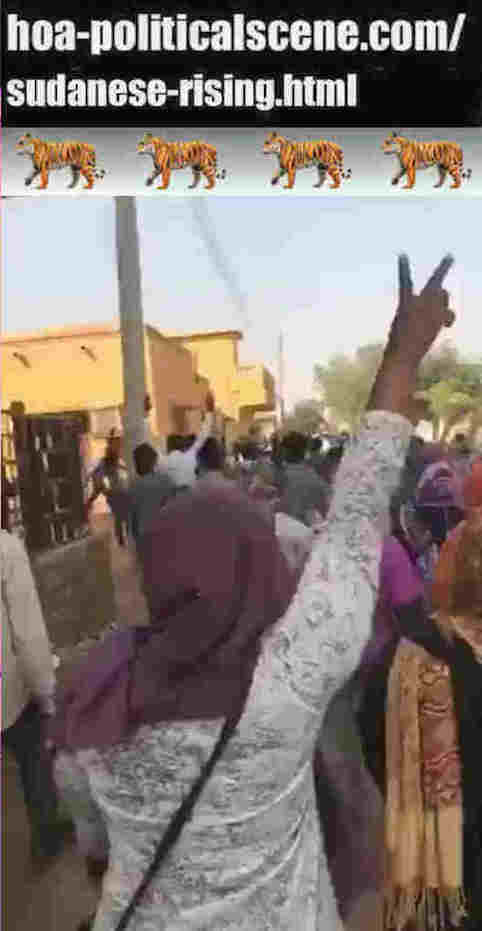 We are not done, yet. The book will cover the rest.

Watch documentaries on Sudan on documentary film at TVCinemaApp.com. Tnanks.

Political comments on the Sudanese rising appear on the section of page below the comment form.