Global Dynamics to Save the world!

The Global Dynamics are attracted to my mind since the spread of worldwide unrest followed at the first period by the broken global system and afterwards by the climate change and its impacts, such as the disappearance of the snow from many snowy lands, which was followed by the spread of epidemics, along with many natural, economical and human crises that affect all of the world. 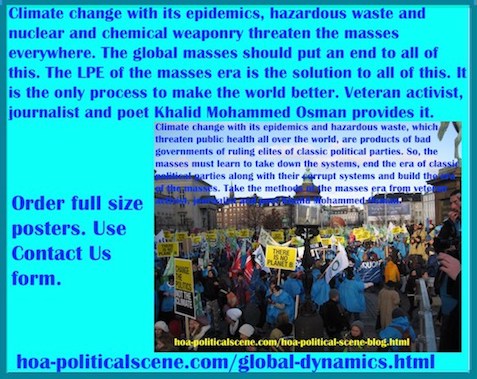 But, not all of that you see clearly nowadays. You know very well in addition to climate change and its epidemics how hazardous waste and nuclear and chemical weaponry threaten the masses everywhere.

From this point on, you will get to know the causes of all of that and then as an individual that might think s/he is weak to do something about such big global issues, you will realize that you  are not weak, although you are individual who have no power to change anything big like that.

You will discover your strength as an individual, because simply the power you will realize inside you is the power of being important asset in human nature. Not only that, but this power is your position as a dynamic element of any change possible to address the global problems.

The lessons are simply provided in simple languages locally and globally (this is why I have translated the main articles into many languages) to inspire that power you have as an individual to be a good CITIZEN OF THE WORLD and change all of the changes made to the global system and to the nature to get the ecological balance back to nature, so the Ozone might be amended this way.

The first thing to do is to get back to the era of the Cold War and then feature all of the problems that have happened afterwards and compare between that era and the era of what they call the New World Order to see the differences and the impacts of destroying the global system before the destruction of the system of the nature.

There are many reasons to everything that has happened and many conspiring elements planning such thing for their own interests, but forgetting what they did could affect them by a way or another in the long run, when the EARTH with humans collapse because of their unwise conducts.

That will happen of course, if you don't do something about it.

Doing something about it is the purpose of "thinking globally, acting locally". planning and publishing GLOBAL DYNAMICS. 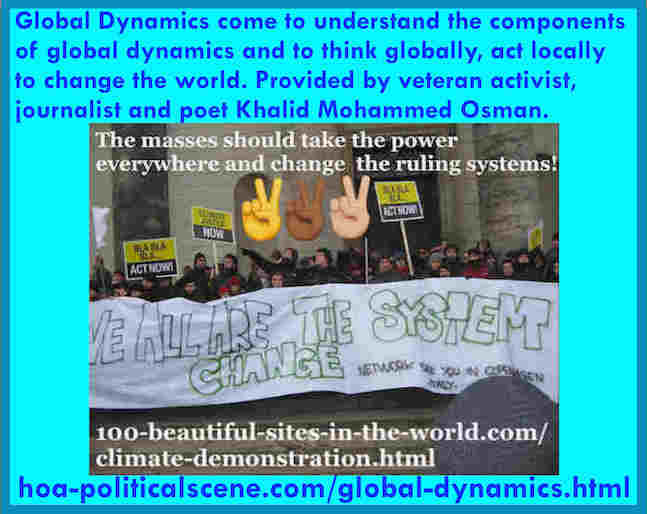 hoa-politicalscene.com/global-dynamics.html - Global Dynamics: to understand the components of global dynamics and to think globally, act locally to change the world. Provided by veteran activist, journalist and poet Khalid Mohammed Osman.

The Components of Global Dynamics!

First of all, the components of Global Dynamics are scattered on many articles in many languages. Each article has about 5-7 sections and they are also on many posters on these articles by the languages they have been published in. The first section of the articles is by the title Dynamic Ideas.

However, more information here could give you more insights on the LPE of the Masses Era, which is somehow summarized by that title and by the title Masses Era. The components are in the LPE itself and they involve the inspirational and motivational steps, then the learning process, the processing, as the second move and the executional process.

The three processes have methods to follow until you achieve with other intellectual people the goals of the Masses Era. The first component, which is not declared precisely is you, as a dynamic asset of the change. This undeclared issue is however obvious, according to your cleverness.

The three elements of the LPE are the activities and in other words the first executional processes. If we consider this as one of the components, as a whole, then the essential components of the executional process of the Masses Era are in the strategies planned to replace every functional system globally by scientific organizations of the masses.

Well, are these all of the components of Global Dynamics?

No, they are not all of the components. The organizations of the masses holds units to do every job that makes a society a society. They represent the units of the society at the state level of governance. This means that they represent localities, cultural ethnicities and demographic administrational forms. 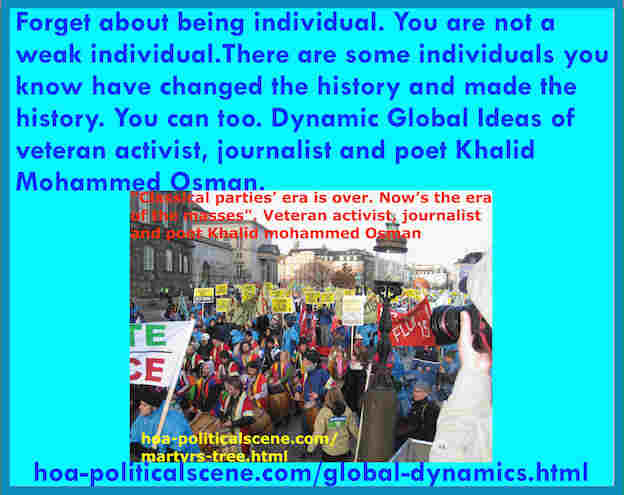 hoa-politicalscene.com/global-dynamics.html - Global Dynamics: Forget about being individual. You are not a weak individual. There are some individuals you know have changed the history and made the history.

The Atomic Engine of Global Dynamics is the Global Masses!

Here, we come to you as an individual, but a good asset in the masses movement. So, you are a gear in this engine that drives the era of the masses to function. Could that happen, if you just sit there and don nothing, although you see that after climate change everything is deterioration?

This indicates how important you are as a component of the Masses Era.

If we agree this is important human component, then the other components of the Masses Era are the functional components, which include al of the process to replace the forms of governments by scientific organizational units to rule the states from the top state level to the demographies and localities.

The whole engine with all of its components is driven by these Global Dynamics I have explained in more than 60 sets of bilingual articles. Without having you as a component nothing could possibly happen. The engine of global dynamics will never work and every thing will not only remain as it is, but it will deteriorate more.

To work this component out, you should work with other proper like you by educating them everything that I am educating you here. How to do this is explained everywhere in these sections of the dynamic articles. However, here are some more insights. 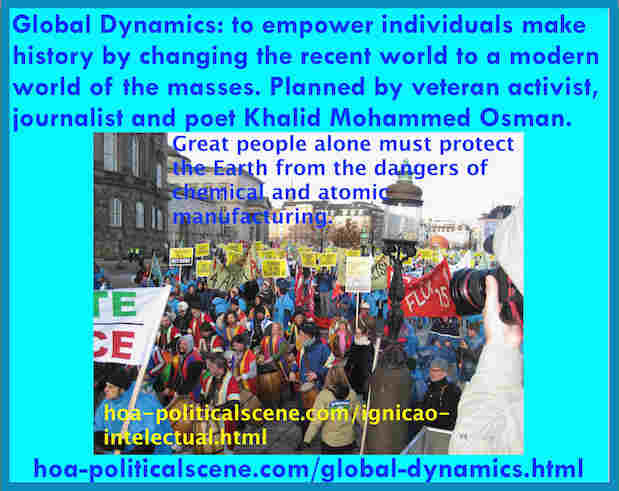 hoa-politicalscene.com/global-dynamics.html - Global Dynamics: to empower individuals make history by changing the recent world to a modern world of the masses. Planned by veteran activist, journalist and poet Khalid Mohammed Osman.

How to Start and Develop the Atomic Engine of the Masses?

We are done by these ten steps of the Global Dynamics to take power all over the world and solve our plant's problems. Subscribe to HOA Political Scene Newsletter to follow up. Please when you confirm your subscription, use the Contact Us form to inform me that you are concerned about the Global Dynamics and want to get in.

Use the Comment C2 Entries form below to comment on it, or to write other thoughts you have. You might also read documentaries on Global Dynamic on documentary film at the TVCinemaApp.com.