The Sudanese Actions taken to setup the Sudanese revolution are not good enough and they will never achieve any victory to the Sudanese uprising. The actions lack the right mechanisms in place to conquer the fundamental religious military regime.

The regime of what's called the National Congress Party headed by the international criminal Omar al Bashir isn't just like any totalitarian regime to oust by using a calssical Sudanese intifada, as before. This bloody regime requires other revolutionary methods. 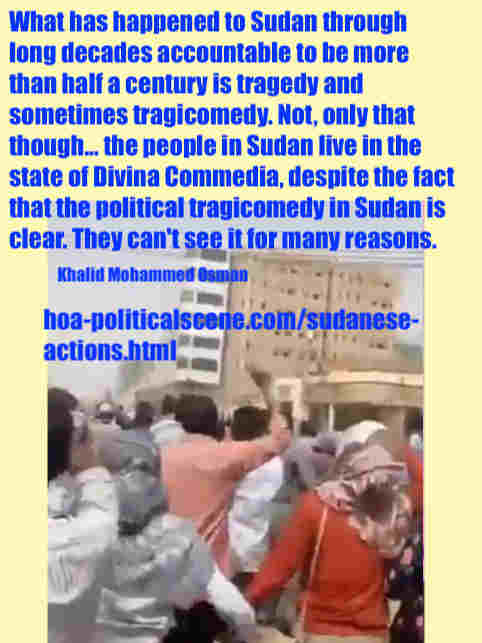 The mentioned parties in this context are all function with religious beliefs to use region in the policies of the state and we know for sure this usage of religion in politics has been the main cause of deterioration in Sudan. It's the cause of making Sudan two (Sudans).

Then we should all be real revolutionists in Annumor AlSudanyah to think together on the best methods to use to implement new revolutionary mechanisms.

Well, to get deeper into this, please follow all the sections of the page, along with the links associated with it, the intro and the insights on why we need the shift.

I am still working hard in the organization of the sequence alphabetically and numerically. So, if you did find any episode not filled in, just come back after some days and you'll find it in place. 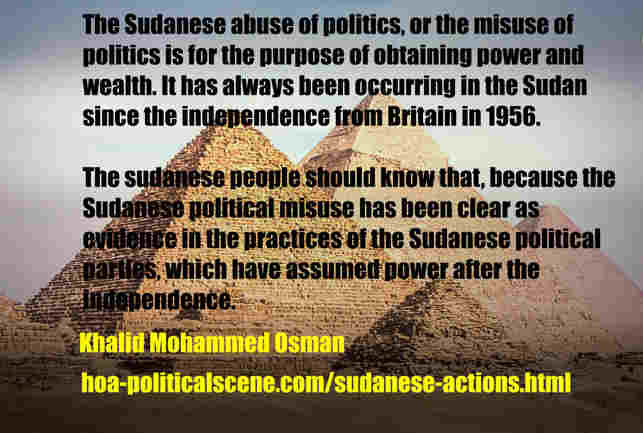 The Sudanese ongoing activities to eradicate the totalitarian regime in Sudan are not enough to win the national political struggle against the Sudanese military-religious system.

These political activities began against the NCP regime since the first year after the takeover of power by members of the NIF in the Sudanese army in 1989.

There have been popular Sudanese demonstrations that continue until this moment against the Sudanese dictatorship, and there have been military movements to eliminate it too. But all these attempts have not succeeded so far.

Although the Sudanese uprising is still ongoing, it has not been able to achieve any victory over the Sudanese totalitarian regime.

With the careful follow-up of the Sudanese Revolution movement since its outbreak against this regime, we believe that the factions and sectors of the Sudanese people involved in the Sudanese uprisings are not stable on a single unified approach and are not based on common, unified resolutions.

Not only that, but the popular sectors involved in the Sudanese revolution against the dictator Omar al-Bashir and his Chauvinist regime have different agendas and goals related to the gains of each sector involved in the revolution.

In other words, these sectors have their own interests. This means that the revolution can not succeed, as long as its revolutionary sectors have different interests and political orientations.

These Sudanese political parties, as they say the revolution should be peaceful, naturally do not want to use political violence in the Sudanese struggle.

That's not because they do not want violence, but because they fear the growing strength of the young revolutionary youth people who do not belong to these parties.

They afraid of losing their power and influence and political interests if the young people succeeded with new revolutionary ideas. 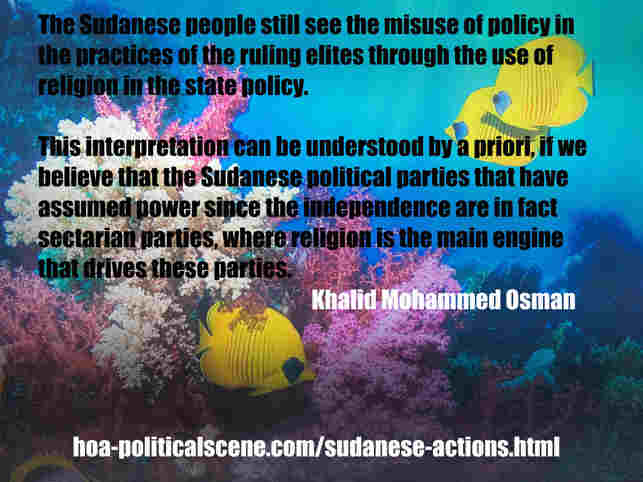 They even have influenced some of the Sudanese revolutionary youth to get into that political orientation too.

These parties, however, continue to maintain their perspectives indicating that they are the sole representative of the Sudanese people. They think that there is no other alternative to assume political power in Sudan except them.

So, these parties are afraid that they will not reach the political power, if the young Sudanese movement succeeded. Their insistence on peaceful Sudanese demonstrations against the regime of Omar al-Bashir is in fact serving the dictatorial regime.

At a time when these Sudanese political parties are participating in the demonstrations and seeking to lead them, they are at the same time working with the regime on the pretext of finding appropriate solutions to the Sudanese political crisis, so as to impose themselves on power again.

I am still standing here in this field of my political opinions, since the failure of the July military corrective movement, which was carried out by members of the Communist Party of the Sudan to change the regime of dictator Jafar al-Nimeiri. The leaders of July 1971 movement were Nimeiri's colleagues in the Sudanese Revolution Council, when they achieved the military coup in May 1969.

It is very important to change the methods of the Sudanese revolution, if we really want to eliminate the totalitarian regime and ensure that the Sudanese sectarian parties do not have access to power again.

These sectarian parties have been in power since the independence of the Sudan and have not provided any solutions to the political problems in Sudan.

When we say changing the methods of revolution, it means introducing revolutionary modern tactics. The introduction of such methods must be carefully carried out in a real revolutionary group, to work in the short and long terms patiently to broaden its own grassroots and then it must fully prepare all the requirements of the true revolution.

The Sudanese actions we need urgently could be developed at Annumor AlSudanyah. We do need to have people with the same political vision to achieve modern, secular and united state in Sudan. 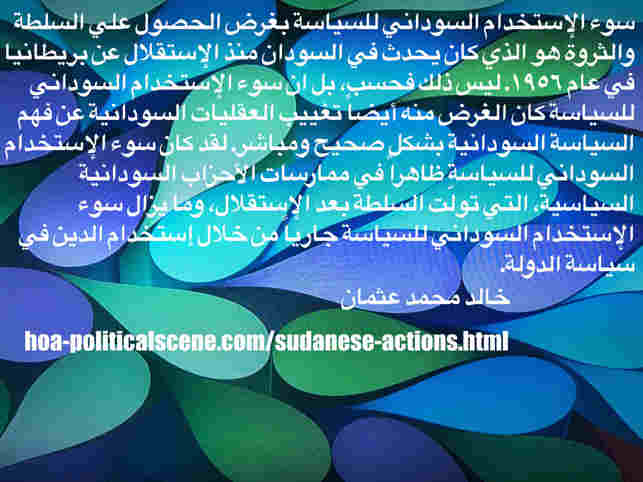 Thinking of Other Sudanese Actions?

Did you find the Sudanese Actions useful?

Do you think of any other Sudanese Actions?

Why not tell us about all of that?

You can also comment on the Sudanese political actions we need to achieve real revolution in Sudan.

Use the Comment C2 Entries form to answer the question, comment, or write about Sudan. Your comments will add values to the "Sudan Online" platform.

In addition to Sudanese Actions and the Sudanese issues you read, you might be interested in some documentary movies about Sudan. You can watch all of that on documentary film at TVCinemaApp.com.

Political comments on Sudanese Actions, or new entries on Sudanese issues appear at the section of the page below the comment form. If you didn't comment, or write about any issue in Sudan, please do that now. Thanks.