"Let children know about Children Refugees as a humanitarian issue; especially where they see everyday some refugee children in their surroundings and help them to understand and deal with other children in such situation with kindness and sympathy". Sudanese author, journalist and human rights activist Khalid Mohammed Osman says. 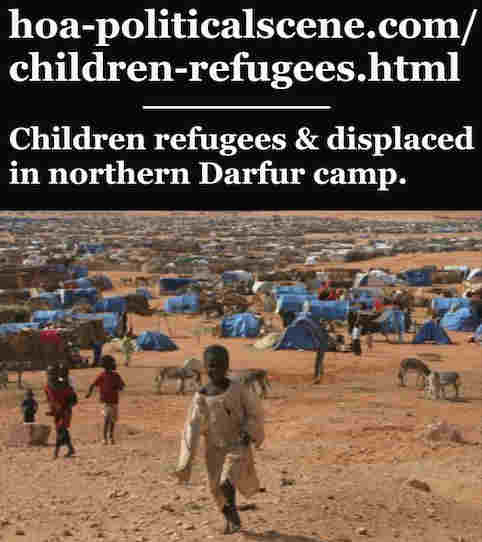 hoa-politicalscene.com/children-refugees.html - Children Refugees & displaced in northern Darfur camp, the outcome of the Janjaweed genocide who are now members of the sovereignty council, after having changed the name to rapid support forces. The world knows NOTHING.

"That is better than to encourage children to look at them as absurd strangers, invading their society, whom they are unwillingly welcomed". He explains.

"Children could understand why refugee children exist, when you explain the situation to them in easy language and then they will gradually develop a kind of sympathy over all kinds of miseries children face elsewhere". He continues. 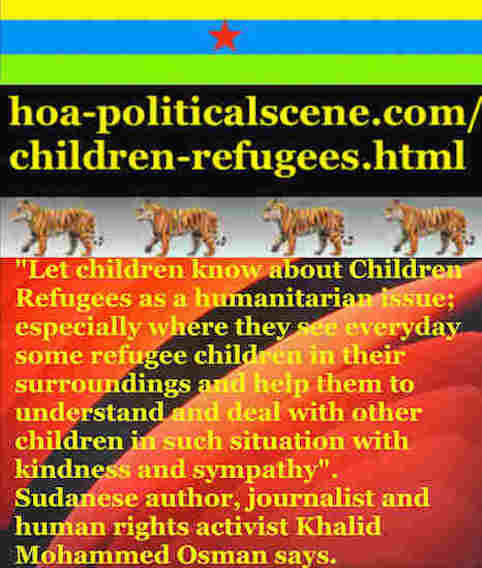 hoa-politicalscene.com/children-refugees.html - Children Refugees: Teach your children how to respect new comers who are the UN refugees and how to deal with them Kindly.

Global knowledge is better for young children, such as those who can read and understand something when told and explained in simple ways!

You'll create a human sense and feed your child feelings positively to feel the pain of the others. Let this berceuse be a grass-root to humankind progress that grows natural! This is Khalid Mohammed Osman's "species of advice".

Children Refugees present 45% of the total refugees worldwide according to the statistics of the UNHCR. However, the number might have been escalated by now, as many disasters have happened since the issuance day of that report.

There's inadequate implementation of those activities for Children Refugees, Although there’re many valuable guidelines and standards developed to rescue, protect and improve the lives of those children refugees!

I hope no one face the child misery that people are still facing in some numbers of states in Africa, Asia and even Eastern Europe.

Child misery exists sometimes out of those continents, previously called (The Third World) and even in the rest of Europe and America. But the child misery there is different from what Africa, Asia and Eastern Europe have in their "luck-stores"!

Child misery in America and Europe is not common or governmental industry! So it's not governmental except only in the Eastern Block during its disorder and the recent effects of the splash of liberalism. 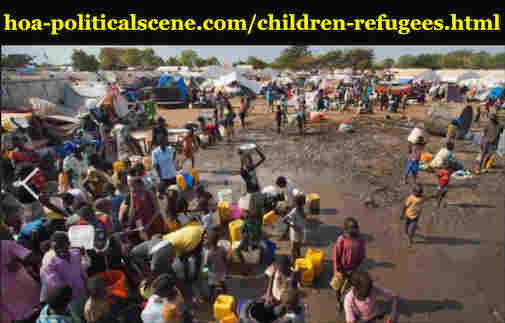 People in Africa and Asia have it (referring to the public misery) governmental and state's made disasters! So, when the International Organizations come: Oh, "We love the International money" they might say, although they made the crisis.

They made it by robbing the national treasury, by wars, by living in luxury as ruling elites and forgetting the rural and the urban development.

So those whom they put in charge of this development in those remote areas take the chance themselves to be rich using the same budget their governments made for some clichés of development.

"I have seen this myself when some key figures I knew, wanted me to take advantage of it. I could simply do by praising them, like other journalists did.

But, oh, it's my luck that I've been born disobedient, with my lamp on my hand, seeking the truth by day." Khalid Mohammed Osman says, and points out at that lamp on his brain.

Yes, some dictators there are doing that, and some others just want to make money out of the misery. The misery here is a dictatorship's industry.

Then when people revolt, or when the situations they have created originate some armed bands that fight to take their share in robbing the national treasury, two things happen.

They either seek refuge in other states and flee their countries with the stolen treasury, or call for peace negotiations to share with those bands their people's (sweat) that built the national treasury.

"Children Refugees were among the most vulnerable children in the world. Not only had they suffered from war or other forms of persecution in their countries of origin, but many refugee children continued to suffer human rights abuses in countries of asylum.

Children made up more than half of all refugees around the world, yet their rights and special protection needs as children were frequently neglected." A UNHCR' says about children refugees.

This report about children refugees highlights the fact that "The human rights abuses that drove children into flight were only the first chapter of hardship for many refugee children.

Even after traveling across an international border to seek refuge, they remained vulnerable to hazardous labour exploitation, physical abuse, denial of education, sexual violence and exploitation, cross-border attacks, militarization of refugee camps, and recruitment as child soldiers."

The children refugees' report declares that "Article 22 of the Convention on the Rights of the Child grants special protection to refugee children. Children who are not being cared for by their parents, known as "separated children," are entitled to special protections under Articles 20 and 22.

Refugee children fleeing war are also entitled to special protection under Article 38 of the convention, as children affected by armed conflict.

Refugee children, like all children, are entitled to all other rights granted under the convention including the rights to life, physical integrity, adequate food and medical care, education, and to be free from discrimination, exploitation, and abuse. 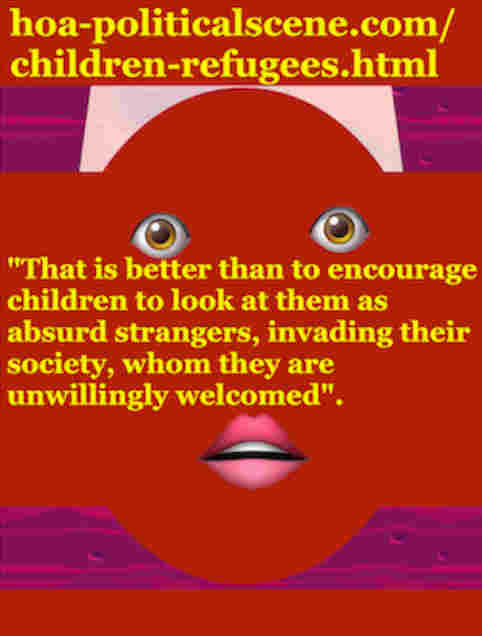 hoa-politicalscene.com/children-refugees.html - Children Refugees: Never look at refugees as absurd strangers, invading your society, or like that they are unwillingly welcomed.

Children Refugees and Other Humanitarian Issues!

In addition to children refugees, you may also be interested in the following humanitarian articles on the HOA Humanitarian Network, which one of Khalid Mohammed Osman's Networks: 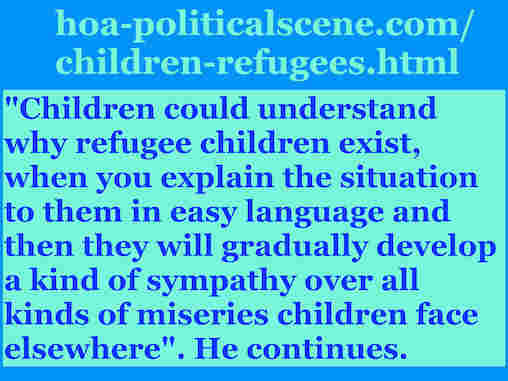 hoa-politicalscene.com/children-refugees.html - Children Refugees: Children could understand, when you explain the refuge situation to them in easy language to gradually develop a kind of sympathy.

What You Think of Refugee Children?

Share children refugees with your socials and the other services you see on the small buttons on the page, or pin one of the pictures on this page. Thanks.

Use the following form to write comments on CHILDREN REFUGEES, and make sure to select to receive notifications about comments on your entry.

You can also watch children refugees on documentary film at TVCinemaApp.com.

Comment C2 Entries on Children Refugees appear at the section of the page you see below the comments form and above this paragraph.