Sudanese Alarm to Take Care of the Revolution, So You'll Never Fall!

The Sudanese Alarm concerns taking care of the Sudanese intifada and some other political issues to address the regional crises in Sudan, prosecute perpetrators of crises, manage the economical and political problems in the entire country and build a new modern, secular and united state. 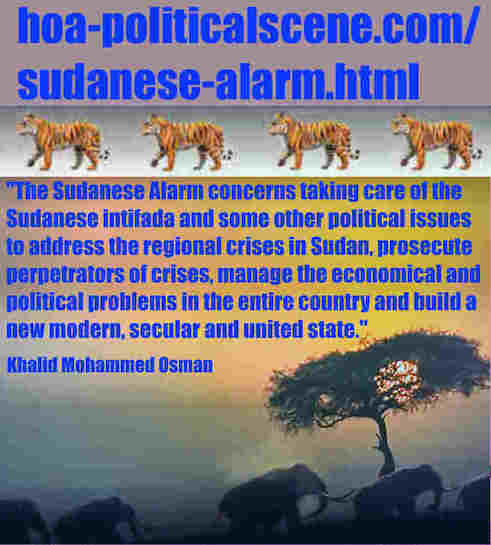 The way to do all of this is through the ongoing Sudanese protests. So, the alarm comes here to take care of the people's movement, to protect the Sudanese revolution and secure the Sudanese rising attempts, until the achievement of victory to the masses.

The victory will never be won, if we trust that the same political power in what's called the military council that came out of the same military religious regime to topple the Sudanese uprising can do any of the following:

We take these serious political issues one by one here, through headlines in the following sections of the page, below the introduction. The introduction is necessary because it provides the sources of Sudanese Alarm, which is episode 20, with its Arabic version Sudanese Political Alarm.

If you were following these episodes from episode 1 until episode 19, then you know that these episodes are in a sequence of Sudanese political articles and the sequence has more than 200 episodes.

You know also that the sequence of Sudanese political articles are educational and good resources for college students who are studying political sciences, human rights organizations, journalists and researchers.

Here is the introduction to Sudanese Alarm and some other episodes that are relevant and so coherent with this episode to know about. They are good sources and they help to understand this episode better. 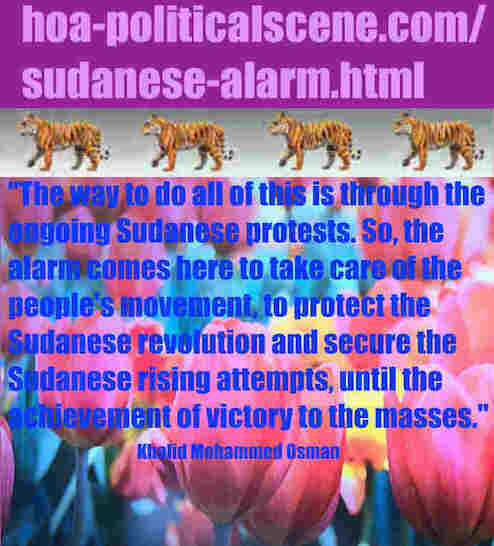 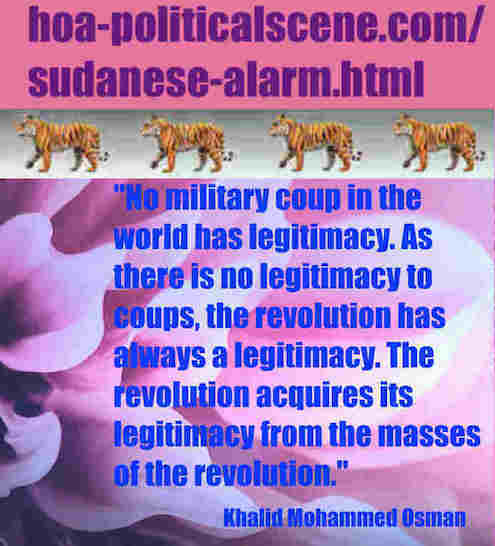 Sudanese Alarm to Understand the Legitimacy of the Revolution!

I have written about the legitimacy of the revolution which derives from its masses at episode 19, Sudanese Aims, along with its Arabic version at Sudanese Political Aims. Here is the rest of the explanation.

In the formation of the revolution, the integrant part of it is of the masses. The masses represent the voters and they vote for the revolution by their massive participation in it.

When the masses choose their leaders, then the leaders are the candidates of that parliament. The votes are determined by the approval of the leaders who speak in behalf of the masses.

So, the leaders of the masses are the candidates for the Revolution Parliament.

To clarify and explain the legitimacy of the revolution further, I say as long as there is a massive revolution in any state, so that implies non official legitimacy exists.

That also means the preceding authority, which the revolution has expelled out of power has not any legitimacy. In such situation a political vacuum exists. 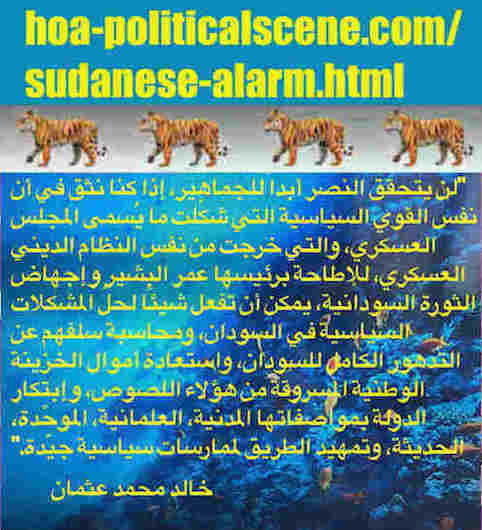 Sudanese Alarm to Shed Light on the Military Council!

Now, what happens when some leaders in the army of the preceding regime come out in a coup to take power from the regime before the masses throw it out?

How we understand the process they take to form a military council to take power?

What do all of their duties and performance in the military council really mean?

What happens in this situation is that the new army leaders in the military council try to prove to the masses that they are honest by arresting some of the elements of the regime and taking some other procedures at the surface which are definitely superficial.

They try in fact to deceive the masses and make the revolution fall by such acts, so the masses will return to their homes to wait for other improvement measures supposed to be taken by such military council. That means they give the main suspects of the preceding regime a lease of life, to have a break and to take breaths.

By implying that since the leaders of the revolution have agreed to discuss with them and they have started discussing with them actually, then they have legitimacy, as no one will ever discuss anything with any illegitimate power.

That's exactly what I tried to warn of through the Sudanese Alarm when I said we in the Sudanese revolution should never negotiate with illegitimate group, such as the military council to give it legitimacy.

I started the SUDANESE ALARM about that issue and no one has taken any chances to get the political power from this damn regime despite the political vacuum in Sudan at that time.

I always have been surprised by the way my fellow leaders and motivators of the Sudanese revolution think of when they face such matters. If you don't have that transparent mentality to think big about such issues, then we shall never arrive at any victory for the Masses. The revolution would be a mess.

Back to the so called military council, which is composed of mercenaries of the preceding military religious regime of the National Congress Party, and as I answered the questions about what happens, how to understand their process, and what their duties mean, I should also say that we should stop right now dealing with such military council and start fueling the Sudanese revolution again.

We should never accept anything other than the fulfillment of the complete goals of the Sudanese revolution.

The Sudanese Alarm about understanding the serious political problems in Sudan right now, is never different than the alarm to understand these problems in any political period, since the independence of Sudan from Britain in 1956.

I am here to help and always will be your candle.

.Continue to the headlines at episode 21 Sudanese Alerts, along with its Arabic version at Sudanese Political Alerts.

Did the Sudanese Alarm Help You Understand?

I think so. If not, please use the contact us form to contact me and I'll be pleased to explain all of that you didn't understand very slowly, so you can get it.

If you understood, use the form below to write comments on SUDANESE ALARM to add to comments on Sudan. You comments have political power to dismantle dictators. They enrich Sudan Online with its Sudanese Online platform on this network.

In addition, you can watch documentaries on Sudan, including SUDANESE ALARM on documentary film at TVCinemaApp.com.

Comment C2 Entries on SUDANESE ALRAM appear on the section of the page above these lines and below the comments form.