That Makes Some Presidents in the Horn of Africa Hold Power for More than 20 Years? 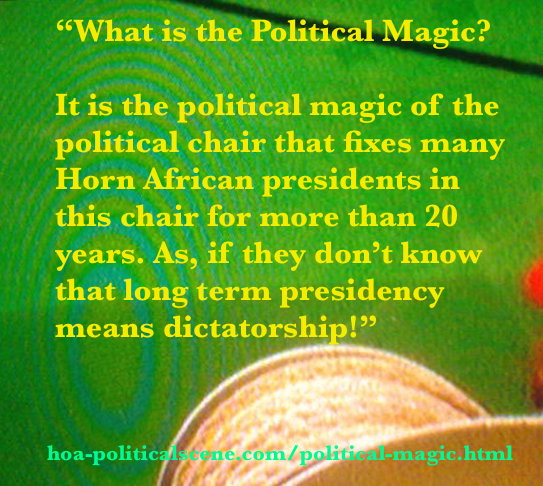 And... my goodness, they enjoy it to the maximum moment of pleasure while their people suffer from disease, hunger, inequality, injustice and imprisonment and while many of the nationals flee to America, Australia and Europe.

This picture is the same as it is in many other African countries. But, regarding the Horn of Africa and without any prejudice, I say some leaders are just making the political situations worse in the area with the intention that when it is keeping worse, they will keep themselves in power and well protected by high paid security agents.

This fact proves that the nationals in the Horn of Africa have not benefited yet from their national independence! The independence proves to be false!

However, the political leaders do not want to make this impression, or admit it as a fact, as other people see it. So, what is wrong with them?

Some of them came to the political power from a coup supported by thieves of merchants with Islamic phobias, such the members of the NIF in Sudan.

The others came from armed struggle fields, but they forgot the principles of the mainstream ideology, and mesmerised by the new position in power, they changed their struggle principles and views and concentrated on keeping in control for as long as they wish.

The political chair has its political magic on them collectively.

Perhaps, influenced by that political magic, they may also use the policy of the strong fist to keep orders in place. They do this by spending great income of the national treasury on security agents and build strong forces to protect their interests. They may also create similar groups with the same interests to work in the opposition.

However, when they think of attracting and bribing some opponent figures, they forgot that those opponents could use the positions they have acquired in the future to build reputation to themselves and then get out to oppose them from outside the countries.

This is the case of Eritrea, when the authorities of the revolution appointed some figures from other armed fronts in high positions to prove that they are honest and democrats.

They blew those outsiders who had even traded the revolution in the past for the money until they become balloons to bomb on their faces from other resettlements they have acquired through the refugees agency of the United Nations.

This happened in Eritrea for example at the time I was working in the main central office of the ruling party and despite that I warned them a lot about such matter, believing that democracy will only be a fact by implementing popular ideas of those who belong to the revolutionary line and who are sincere enough to maintain the collective values of the revolution.

When the ruling party thought of attracting some people from the other Eritrean groups and then appointed them in some positions, it built them characters and careers from nothing and then helped them to be opponents from outside the state of Eritrea.

When the ruling party saw that this policy is not useful with some people too late, the decision makers sent them to lead the diplomatic channels abroad, giving them the chance to become more powerful to oppose them and get the support they need by becoming African political refugees.

They built them without knowing about it, while they lost other sincere people who wanted to revolutionize the system by only taking positive moves towards genuine leadership and democracy.

Not only that, but also by planning and participating in public organisational works and getting the high officials involved in such activities with the public, as it has happened when I organised the activities of the environment. See environment and environment protection. For more environmental resources see 100 Beautiful Sites in the World.

In other countries like Ethiopia for example, the ruling party also thought of calming down the revolted regions by appointing opponents from those regions to share the power and wealth.

This means that, the ruling elites always think of addressing serious problems by such appointments, which is wrong. This policy helps the political problems of those groups or those regions become more intense.

They lack the proper ways to address their own political problems. This happens because they have forgotten the ideological principle that brought them to power. Even the ideology has potential to some works inside it to respond to the ever-overlooked political challenges.

Now, you can see definitely, how the political magic of the political power has developed serious problems in the Horn of Africa even among revolutionary fronts.

You will be surprised, because the revolutionary groups supposed to be the leading fire to burn dictatorship, annexation, economical problems, marginal regions problems, ethnic problems, exploitation, bureaucracy, corruption, misleading behaviours and forged elections.

Take a peek into the following, bring in your political magic and be active. You can write political articles here. Thanks.

Use the form below, if you had a comment on political magic, or if you just want to write some political analyses. Thanks.

Who, He Does Not Love Political Power? Not rated yet
Who, he does not love the political power and the wealth? Apparently, and of course because of their conducts until now, they are all after the political …

Comments on the political magic appears at the section of the page below the comment form. Political articles flow here.