Is Uganda Standing in Front of Uncertain Future?

Uganda faces new interior political challenges from opponents to shift the political system, as it faces exterior human pressures from donors and monetary powers to bow to their conditions to get aid.

The state overcomes and recovers from a tragedy in the past decades caused by the rebels of the Lord Resistance Army (LRA), which was driven by strange religious beliefs to wage wars in many locations inside the territories and on the borders.

However, after recovering the long period of unrest, the state faces other challenges and pressures driven by the international donors to bow and accept their conditioned aid. The leaders know that conditioned aid is not a human aid at all. 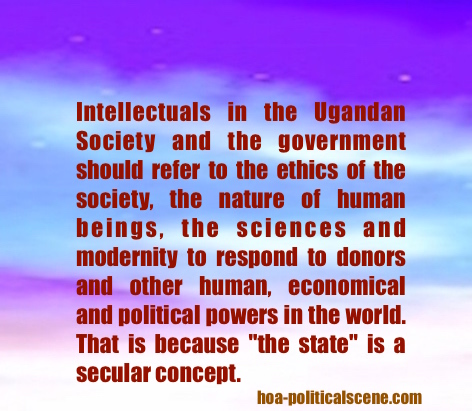 For example, a very simple issue, which is natural caused by unnatural matter put the aid to the country at risk, when the president signed new laws with legislations of life sentence for gay activities.

Through this issue, which could be explained by logic, the donors cut aids over the Ugandan anti-gay laws.

The Ugandan president Yoweri Museveni welcomed the cuts of aid. He said, such matter has encouraged his state to be self-reliant and pointed out to other African countries to do the same.

He said his state will become self-reliant and other African states should do so. He stressed on the fact that African "should be giving aids" instead of receiving it, because Africa is naturally richer of natural resources.

The logic of the response is that, aid that comes with conditions is not aid and it is inhumane. The second issue is that Africa could donate aids to the world by only using its fertile lands with the wealthy resources included under the surface of these lands.

But, while the response is logically initiated from such facts, the president and his spokesman used the wrong approach to further respond to the matter of the aid cuts.

The statement of the spokesman, Tamala Mirundi, that the president is religious degrades the president and shows him as a man who don't know that the secular state shouldn't be ruled by any religion, although the ethics may be almost the same.

In a majority of a Christian society, the state takes some human ethics, which could be found in the religion and that shouldn't make it a religious state.

There is a slight difference in this statement that differentiates the state from religion, as a civil society with its values in its cultures, traditions and the human values it gets from modernity.

So, the explanation of singing the new laws should refer to the human values of the Ugandan society not to the religious values.

The human values explain that such relation between men is not normal and it contradicts the laws of nature. That is a scientific explanation, not religious.

To respond to such matter, which comes from other Christian societies referring to the religion of the same line is somehow not logical in the term of natural existence of sex, sciences and modernity.

The natural existence of sex includes the natural gender issue, which is threaten by the new claims of conversional genes to create a third sex, which is against the nature of human existence.

Intellectuals in the Ugandan Society and the government should refer to four essential resources of knowledge to respond to donors and other human, economical and political powers in the world. That is because "the state" is a secular concept.

Again, intellectuals in this African society and the government should refer to four essential resources of knowledge to respond to donors and other human, economical and political powers in the world. The four resources are:

Why should they do this?

The response of the president and the statement should be more logical according to the knowledge they have from these resources, which provide good answers to the matter that caused donors to reduce, or stop their aid to Uganda.

This Page About Uganda!

Well, this page about Uganda is also a site map on the HOA Political Scene. It is the site map number 8. It includes many topics about the political development in this country.

You can read this section page about this country and then scroll direct to those 34 sitemaps to choose more pages about this African state or to read about the other seven countries in the Horn of Africa, plus two countries that have impacts on some countries in this geopolitical area, such as Chad and DRC.

The First Pages on this African state in HOA's Network:

Use the form below, if you had a comment, or if you just want to write some political analyses. Thanks.

10 Years in the Bush in Uganda

According to 10 years in the bush, I think writing about political Uganda is not easy. First of all, you should have been in the bush with the revolution …

Are you from the Uganda?

Read about beautiful places and write about your place at Any Beautiful City, or READ about movies shot in Uganda at TVCinemaApp.

Did you know what is going on?

Are you fluent in English, or Arabic?

Freelancers needed! Fill the form here and provide details about you and a summary to news or one topic news analysis for evaluation.

Share this page with your services through the buttons below, at the top or at the bottom of the page.