I always wonder about IGAD and how this political and economic umbrella takes different leaders with different political schemes and conspiracies against each other under its shade!

Is it diplomacy that we could understand from gathering different shades of politics under one shade?

How the leaders of the Horn of Africa agreed to form and meet continuously under this umbrella, although every one of them knows what the other leader thinks about him and his policy in the area? 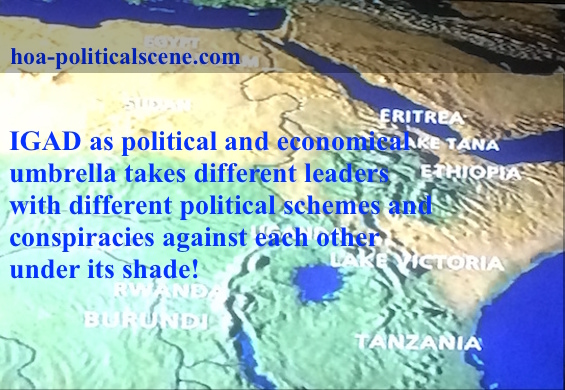 For example, the other leaders in IGAD know that the military religious regime in Khartoum is a fundamental regime with concrete scheme to export terrorism to other lands in the area and according to it understanding with forged Islam plans, the regime wants to "Islamize" the political experiences of other states.

Kenya as a member is easily corrupted and the Sudanese dictatorial regime could simply get it to its side. So, it is a weak member.

Ethiopia with its regime has ambitions to claim Eritrea back. Somalia is destroyed by the scheme of the Sudanese dictators and by the Somali composition of clans and religion. It is alreay divided with Somaliland claiming independency.

Djibouti is tiny and unable to make a decision in any big issue when it comes to contradictions.

So, Eritrea and Uganda are left alone under this umbrella.

And here exactly is where the Intergovernmental Authority on Development (IGAD) comes to be weak.

Getting back to the decisions the authority made could explain how the authority has failed to address the development problems and provide the solution for the area to avoid draught.

What has happened from the first day the authority started is that nothing have been achieved to avoid continuing draught and those countries are still depending on international aids.

In addition, the political problems the leaders have prevent any development. So, what is the sort of the development they are speaking about?

In Sudan, speaking economically, as an example, how could they achieve development with all those called Islamic banks robing the national treasury of the state?

In Kenya, how could they achieve this development with all of the corruption we see that resides deep in the political system?

In Ethiopia, how could they achieve this development with all the focus on the region of Tigray?

There are so many examples that leave only Eritrea and Uganda out of this picture.

The Beginning of IGAD and the Big Plans!

IGAD is the Intergovernmental Authority on Development, which includes Djibouti, Eritrea, Ethiopia, Kenya, Somalia, Sudan and Uganda. You'll read more information about this authority here and on other pages.

The authority was established in 1996 by suppression for the Intergovernmental Authority on Draught and Development (IGADD) founded on 1986.

Natural disasters, famine, ecological degradation and economical deterioration hit Eastern Africa in the years between 1974 and 1984 as results of bad political systems and political unrest in most countries.

The first authority was established when all the countries except Eritrea approached the United Nations to establish the authority.

The heads of states and governments met in Djibouti in January 1986 to sign the agreement and the authority began with the headquarters located in Djibouti.

Eritrea, the red sea paradise achieved the independence and became the seventh state-member in 1993.

The Assembly of Heads of State and Government made a declaration in April 1995 in Addis Ababa, Ethiopia to revitalize IGADD.

On 21 March 1996, they signed the Letter of Instrument to Amend the IGADD Charter and establish the new authority. The Assembly of Heads of State and Government launched on 25 November 1996 in Djibouti.

IGAD has much functionality like the Conflict Early Warning and Response Mechanism (CEWARN), the Capacity Building Program Against Terrorism (ICPAT), the Climate Prediction and Application Centre (ICPAC), in addition to I.G.A.D Livestock Policy Initiative and I.G.A.D Livestock Market Information System.

However, in the meantime, IGAD is only an official political body that gathers the leaders of states in the Horn of Africa despite the fact that those leaders have great contradictions and therefore they are conflicting against each other.

It is only for this reason; I assume the organization is a fireball. It is not what we, the simple people in the Horn of Africa need. We have not decided to form it and we have not assigned those leaders to speak on our behalves and represent us in this gathering.

The Intergovernmental Authority on Development was born actually dead, since three leaders had wars or still have some anger towards each other.

Therefore, IGAD is not the ambition of the people of the Horn of Africa. There should be a public solution to this hollow channel.

Let us think together on how we could achieve a real public authority that fulfils all our ambitions to gather all the socialist people in the Horn of Africa.

If you have some ideas on IGAD, please use the following form and help us come with a framework for strong gathering project in the Horn of Africa and East Africa.

IGAD is the intergovernmental Authorty in the horn of Africa working with the interst and agreement of the reginal Authorities for farther devlopment,but …

A Regional Economic Agency: What Prospects and What Possibilities? Not rated yet
The States of the HoA jointly agreed to established IGAD - They committed themselves to entrust certain responsibilities to IGAD on their behalf; they …

United States of the Horn of Africa! Not rated yet
Now, they will discuss in the IGAD's coming session, the fears they have expressed by referring to the fact that if the southern Sudan chooses to be a …

If you liked the idea in this page about the Intergovernmental ﻿Authority﻿ on Development (IGAD), please share it with your services through the buttons here, or at other locations on this page. Thanks.

Comments on this page appear at the section below the comments form. Be active and comment to get some useful gifts of love.

See movies and hear political TV news through the TVCinemaApp.

The updates flow continuously into the HOA Political Scene Blog. Thanks to the creators of those strong website building and optimizing tools.