hoa-politicalscene.com
East Africa, Horn of Africa & the World in Focus

The Politics of Myth Exposed in Sudan!

The Politics of myth in Sudan became a myth since 1983; the day the third dictatorial regime of Jafar al Numeri implemented what they call the Sharia Laws, influenced by the National Islamic Front (NIF) of the Muslim Brothers of Sudan to destroy the secularity and the unity of the state. 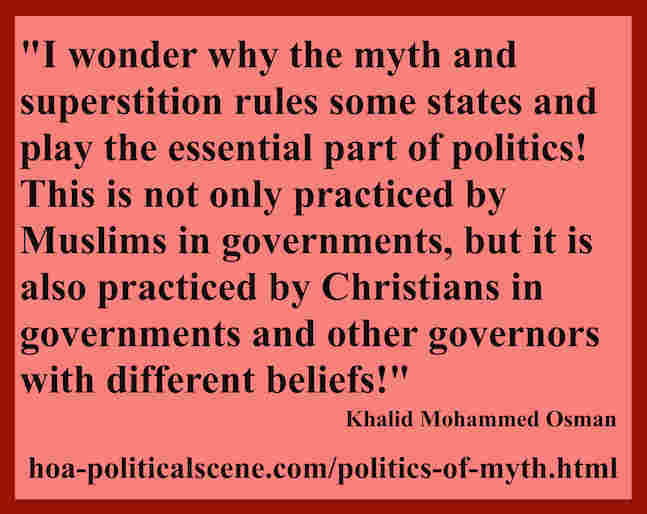 hoa-politicalscene.com/politics-of-myth.html - Myth of Politics: in Sudan is practiced by religious, sectarian parties and military dictatorship since the independence, quoted Khalid Mohammed Osman.

However, Numeri and his followers in the military elites of the Sudanese Dictatorial Regimes know that the myth control the lives of almost two third of the Sudanese people. Therefore, they use it to claim power and keep in power for long periods.

This politics of myth is still to be the root causes of the entire political problems in Sudan. It is the unhidden fabric of the bad political experiences today.

The myth of politics, however, isn't practiced only by the totalitarian regimes in Sudan after independence, but it is used in fact by the Sudanese Sectarian Parties at first. The leaders and all of the members of these parties, which have led Sudan since the independence are Muslims. So, the leaders used the same myth of politics to control the masses and led them like herd. What a mess?

You better say, what a fate?

The Myth of Politics Still Controls the Minds in Sudan!

Well, the Sudanese people have reputation regionally by their dignity and hospitality, and there are many stories in the social life and the folklore that tell about people who stayed hungry to feed their guests.

However, they have short time to think about the relation between the practical politics and the myth, or the religion and the myth.

While the myth as legendary concept takes its persistence in the collective public memory, the spiritual leaders of the religious and sectarian parties use it to influence the people and attract them to be followers.

They use it even to promise people by having good second life after death, claiming that they have the keys of the Paradise. This was important fact that connects simple Sudanese people to their spiritual leaders, while the leaders use this policy of myth to build wealth and power in the first life.

In fact, it is a political tragicomedy in Sudan.

When people became hungry, they always think of religious reasons that caused them to starve. When they had troubles, they also go back to religion to think of what has gone wrong or what wrong they did to experience these difficulties. They think that God punishes them because they have committed sins, or something wrong that made God angry with them.

The real players that develop the politics of myth and connect it with the religious myth stay always far away from being the causes of such situations, until some sincere intellectuals come to unfold the secret policy of the myth and say there is no any reason for such connection between politics and religion, or there is no any connection between realities and myths.

The real players, wether they are military leaders, or Muslim and sectarian leaders also stay a way from being punched by God, because they are the God's shadows on Earth.

The weak intellectual will soon be broken and s/he will come back to pay the duties of obedience and loyalty, because then the parents in the family who are secular will take the leads from the leaders of the Muslim and sectarian parties.

If we accept that the crises of nature happen by fortune and neglect any scientific reason for such crises, there is no reason to ignore accusing the political leaders in the political power of lacking the right national resolutions to the impacts of those crises, by enhancing the entire infrastructure in the country and stop CO2, fouling and other damages caused by such elements.

The myth of politics is one example and of course, there are many examples in the political life in Sudan today, all of which are good to prove that realities are stronger than the politics of myth, which has always been used by the ruling elites to dominate simple people like the Sudanese people.

If you liked the Politics of Myth, share it with your social services through the buttons at the top, or at the bottom of the page. Thanks.

You can use the following comments form to comment on this page or to write about the politics of myth in any country in the Horn of Africa.