When will you take action against Child Trafficking?

Taking anti-Child -Trafficking actions obviously begin when you see it, or read and hear about it. This is the first absolute answer to such question. But, this happens actually if you are really too aware and concerned about such humanitarian issues. 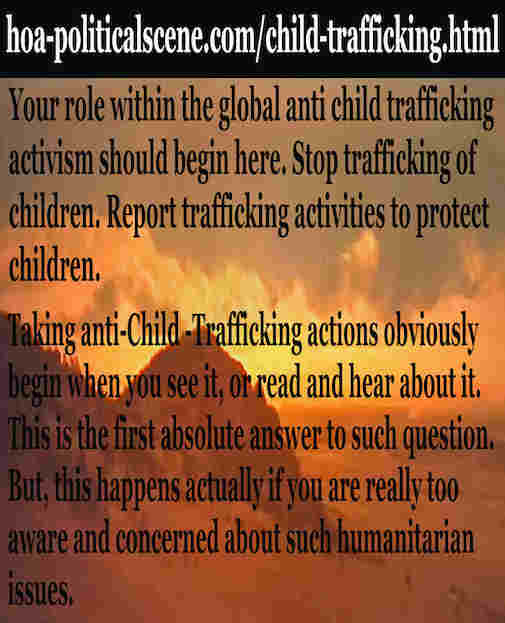 hoa-politicalscene.com/child-trafficking.html - Child Trafficking: A quote on the issue intriguing to fight it by Sudanese author, columnist, humanitarian activist and journalist Khalid Mohammed Osman.

You can read and take actions when you look and check this case through this page and through some international organizations here. It would be great if you decided to support children.

In addition, this page about children trafficking is part of the humanitarian network of this website. Links to the humanitarian pages are included also here at the second section of the page.

Read this section thoroughly and if you found it interesting, tweet or like the pages using the small buttons on the page. Thanks. 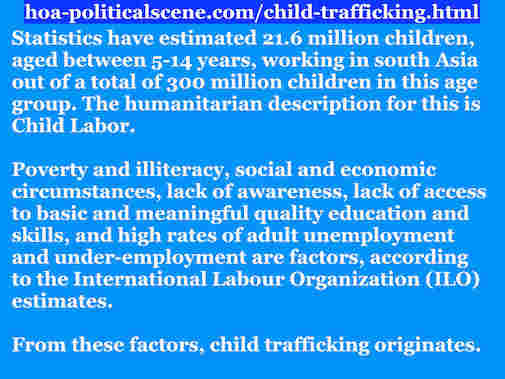 hoa-politicalscene.com/child-trafficking.html - Child Trafficking: A quote on the issue by Sudanese author, columnist, humanitarian activist and journalist Khalid Mohammed Osman to fight it.

Is it true that Child Trafficking is originated in Eastern and Southern Asia and Africa?

Statistics have estimated 21.6 million children, aged between 5-14 years, working in south Asia out of a total of 300 million children in this age group. The humanitarian description for this is Child Labor.

Poverty and illiteracy, social and economic circumstances, lack of awareness, lack of access to basic and meaningful quality education and skills, and high rates of adult unemployment and under-employment are factors, according to the International Labour Organization (ILO) estimates.

Children are perceived as adults at an early age. Children Trafficking had begun and been developed associated with child labour in South East Asia and Africa a couple of decades ago.

The reason for this kind of trade is the poverty in these societies in addition to the factor of lacking strong family and society bonds. Some families sold their children to be adopted in so many countries in Europe.

Some media sources criticize some of the authorities in so many countries there because of their failure to maintain a positive economical growth.

Political conflicts in some parts of this world had generated many Child Soldiers and Child Trafficking cases, as well. So, Children Trafficking is very alarming until this moment as we still hear and read about it in the news.

But Children Trafficking could be generated also in some European countries. 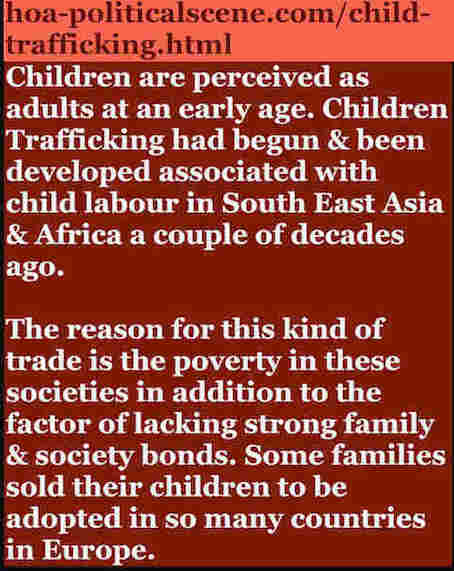 Child Trafficking in the Spotlight!

The UNICEF says thousands of children are being trafficked to Britain each year. As human trafficking shows the ugly picture of this fastest growing business as an organized crime, the UN agency urges an end to it since it violates the fundamental human rights.

Children are trafficked actually to be exploited as cheap labour, or to be exploited sexually. It seems there're some Children Trafficking companies that are making the big deal in this trade. Is it a new age of slavery?

The UNICEF indicates that children and their families are often unaware of the dangers of children trafficking, believing that better employment and lives are avoidable in other countries.

The agency said trafficking is often being masked by the West African cultural practice of sending children to live with extended family or friends to be educated or to find work.

While the latest Child Trafficking tragedy came from Cameroon, Guatemala, Nigeria, Togo and Ivory Coast to Britain and USA, many sources estimate that Children Trafficking is growing to as much as 1.2 million children every year.

The children are being drawn from a growing number of countries - mainly from West Africa, but also from other African countries, Eastern Europe, Asia and even Jamaica.

The UNICEF estimates that 1,000 to 1,500 Guatemalan babies and children are trafficked each year for adoption by couples in North America and Europe.

Read more on Child Trafficking in the UNICEF reports here. 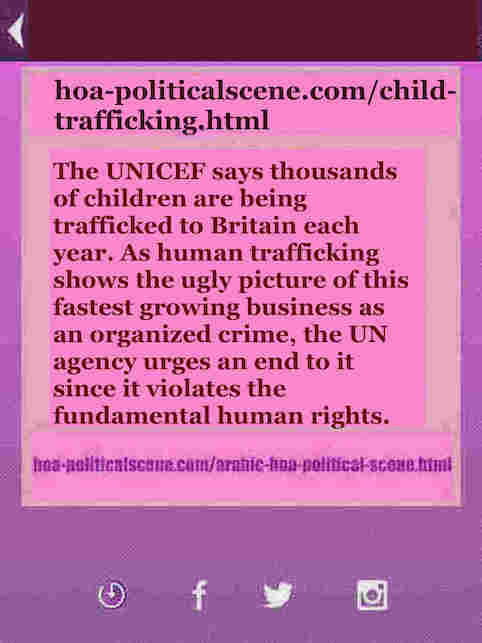 Child Trafficking on the BBC!

As for Children Trafficking to Britain, the BBC says 8.000 to 10.000 children from West Africa are fostered in the UK, and many of the African girls and women who are trafficked to Europe end up on the streets.

The BBC also estimates that thousands of Nigerian children and young people are trafficked each year, both within the country and beyond its borders.

As far as the International Labour Organization estimates there're around 200,000 children trafficked within west Africa annually. Child Safety is important, not only in such cases, but also when they came here to use some technologies such as the Internet, for example.

Almost all African states are affected by trafficking as importers or exporters, or both, the United Nations Children's Fund report says. the report warns that children are the biggest victims of trafficking: forced into slavery, recruited as child soldiers or sold into prostitution. 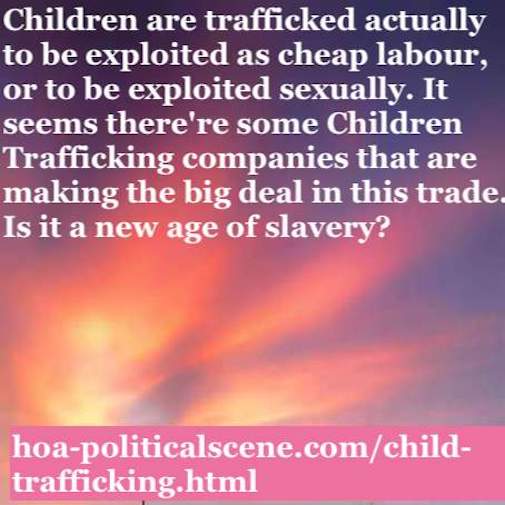 According to Human Rights Watch, it is estimated that over one million children worldwide, including thousands in West Africa, are recruited from their homes each year by individuals seeking to exploit their labour.

HRW says, "Upon their recruitment, trafficked children often travel long distances without adequate food and shelter. In some cases, they suffer severe injury or death on the way. At their destinations, they work long hours in homes, markets, fields, and factories."

In many cases, they undergo extreme forms of physical and mental abuse, including beatings, death threats, and the prospect of never seeing their families again.

The UNICEF called on the governments to criminalize trafficking for all purposes and HRW calls for Governments to fulfill their obligations under the International law to protect children from these appalling abuses and indeed, from all practices similar to slavery.

Child Trafficking and Other Humanitarian Scenes in the Horn of Africa:

Useful resources are included here to read more about this issue including other humanitarian issues. Please check all of the links and support this Horn Africas Network by reading thoroughly. Thanks.

Share Child Trafficking with your socials and the other services you see on the small buttons on the page, or pin one of the pictures on this page. Thanks.

The Solo Build It site building, optimizing, monetizing and automating tools on the image below are all combined in one place to help you learn how to do any humanitarian activities on the web, including anti children trafficking on a website of your own, or build a business website to improve your life.

Use the following form  to write comments on CHILD TRAFFICKING, or to report this humanitarian issue if it exists in your society, or elsewhere you know.

You can also watch Child Trafficking on documentary film and other TV reports on TVCinemaApp.com.

Comment C2 Entries on Child Trafficking, or new reports about this humanitarian issue appear on the section of the page just below the comments form and above this paragraph.