Save the Ethiopian Refugees!

The Ethiopian Refugees are Exposed to hard living conditions. Here are many sources about this topic combined with the Eritrean refugees.

The stories of the Eritrean and Ethiopian refugees are sad. Human sufferance escalates being that amongst those refugees in the surrounding countries in the area within the Horn of Africa's region or far from it. 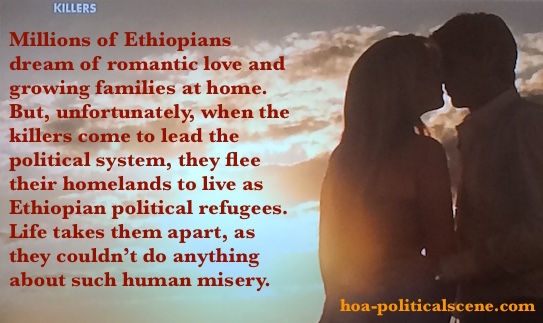 Our reporters and commentators have submitted many stories to read in the sitemaps they built on the HOA's Political Scene Humanitarian Network below the following humanitarian report.

More than 90.000 Eritrean and Ethiopian refugees live under threats in eastern Sudan. The United Nations World Food Program (WFP) estimated the gab of the help needed by 47% funding gap to prevent those refugees from suffering hunger in east Sudan.

The amount of money required to fill the gap is 17.7 million dollars, as estimated by the WFP.

Families of refugees from both Ethiopia and Eritrea strive to meet the hard conditions of living in a poor area. Reports and comments made by individual amongst those refugees in the area and in other countries in the African continent reveal some of the challenges.

More Stories about the Ethiopian Refugees!

This human misery escalates when we know that chances for those Eritrean and Ethiopian refugees to return to their countries or to integrate in the local Sudanese community are rare.

They had no big problems in the past as they found some ways to integrate and survive better. However, after the continuation of dictatorship in the three countries, the Eritrean and Ethiopian refugees become more vulnerable to personal security deterioration, shortages of fund, malnutrition escalating rates, and illiteracy.

The development of the political events in the last fifty years in the eastern corner of the Horn of Africa resulted in Sudan having millions of its displaced refugees. The country is unable to solve their problems.

In addition, the draught, famine and wars in Ethiopia and Eritrea during the 70s and the 80s, the first long freedom war between Eritrea and Ethiopia and the last short war forced millions of Eritrean and Ethiopian refugees into Sudan and other countries.

This situation creates high emergencies in the area and demand urgent solutions to stop the escalation of the human deterioration in the area. However, even the operations to provide the assistant of the 9.4 millions dollars WFP has received are facing some cuts sometimes because of security conditions.

The Eritrean and Ethiopian refugees are in 12 camps in eastern and southeastern Sudan. They find themselves in different hard conditions while they compete with local Sudanese people and internally displaced Sudanese for work.

However, few of them have any chance of employment. Social and cultural factors in Sudan limit access to food and sources of income, so large proportions of families especially women are particularly vulnerable to hunger.

Some of the problems the international fund for Eritrean and Ethiopian refugees faces are chronic funding shortages, insecurity in the region as well as problems in contracting enough trucks to carry food aid from Port Sudan to the camps.

Malnutrition rates in the Eritrean and Ethiopian refugees' camps reached high levels according to one of the nutrition surveys made by the WFP, COR and UNHCR. Global acute malnutrition rates among children under five of 12.7 percent in Um Gargour camp have been registered.

Since early in 1949 Sudan eastern borders had been the gate for the Ethiopian and Eritrean refugees to flee their countries to Sudan.

They wrought there in big projects like Al-Gazera, Al-Gadarif and a lot of them were settled in big cities like Port Sudan, Kasala, Madeni, Hasaheisa and the capital cities in Khartoum, Khartoum North and Om-Durman.

The Eritrean and Ethiopian refugees played the positive role to assist their revolutionary groups in Ethiopia and Eritrea.

Starting from the late fiftieth, considerable numbers of the Eritrean and Ethiopian refugees were funding those revolutionary groups.

The most important fund that the Eritrean revolution had received during its struggle was funded from Eritrean business projects in Sudan.

Some of them have possessed lands and agricultural projects. However, becoming Sudanese through their long living in Sudan, does not deny them their original identities. They have both Sudanese nationalities and Eritrean nationalities.

The military religious dictatorial regime in Sudan forced both the Eritrean and the Ethiopian refugees in the past to choose between being Sudanese or Eritrean or Ethiopian. The regime uses them now as a political card and accepts those refugees who prove good faith to work in its political scheme to export terror to Eritrea.

The Eritrean government has conditions in the repatriation, because the government knows there are some numbers of those called Eritrean Jihadists amongst those refugees.

The ﻿(NIF) National Islamic Front﻿'s military regime funds some of those Eritrean and Ethiopian groups and some other Somali Refugees and educates and prepares them using the mentioned scheme to export terrorism to other states in the Horn of Africa.

The Sudanese dictatorial regime plays the peace agreement with the rebels and the forged elections to show the world that it changed its terrorist policies. However, it is easy for the military religious regime dictators to change their clothes but not their scheme. Sudan lives sensitive and very deceitful period of its history under such chaotic situation.

To read about how this ruling party plays on the political scene and changes its name and some of its political tactics go to Muslim Brothers' Octopus in Sudan! They know how to bow to the International wind of pressures! Snaky?

Considerable numbers of them are still using both of their identities. They are Sudanese while living in Sudan, and Eritrean and Ethiopian when they go to their original homelands. No one denies them to be this or that in Sudan, until the regime forced them to choose.

The new Ethiopian refugees who fled to Sudan during the last Ethio-Eritrean Wars found themselves in danger because of the new policies of the military religious regime. Reports in the links below reveal that their situation is worse and they are desperate for urgent help.

Especially those Ethiopian and Eritrean refugees who were born through intermarriage between the two nationalities, they now feel that they have no country of nationality.

The live in difficult situation than that the other Eritrean and Ethiopian refugees live. They need urgent help to get out of Sudan and resettle in any other countries in the world.

Comments and Articles Reporters and Readers Wrote about the Eritrean and Ethiopian Refugees:

Eritrea and Libya: The Same Fate for Eritrean Refugees

Eritrea and Libya: The Same Fate for Eritrean Refugees Comments

It has Never Been Easier for Eritreans in Eritrea

It has Never Been Easier for Eritreans in Eritrea Comments

The Untold Threats and Sufferance of Eritreans in Libya

The Untold Threats and Sufferance of Eritreans in Libya Comments

They are Selling and Buying Human beings in Libya

They are Selling and Buying Human beings in Libya Comments

Are you Ethiopian refugee or are you seeking asylum?

Fill the form below. Tell us your story and let us bring it to the lights. You should indicate that your name stay anonymous if you feel afraid. You can also use this form to write about any topic in any country in the Horn of Africa.

The 1951 UNHCR Geneva Convention about the rights of refugees is an international agreement that gains respect and support worldwide. Unfortunately, …

Some political refugees from Eritrea, Ethiopia and Sudan are shot dead by the Egyptian security guards on the Egyptian borders with Israel, while taking …

Take Responsibility UNHCR and ARRA in Ethiopia! Not rated yet
I am from ethiopia eritrean refugee I want to say all the dead or victom of the meditranean sea especialy the boat sink at september 2013 about 140 eritreans …

Deliberately Forgotten! Not rated yet
Since tplf come to power their was no time that refugees stop to fled to sudan . After 2005 the number of ethiopian refugees fled to sudan increased to …

Eastern Sudan Feeds Israel by Human Power! Not rated yet
The numbers of Eritrean, Ethiopian and Somali refugees in eastern Sudan reached 48000 refugees. Out of the total numbers, 38000 refugees have fled through …

Comments on Ethiopian refugees appear at the section of the page below the comment form. So, you can read the commentaries on the Ethiopian political refugees and comment on them from there to get some useful gifts.

If you intended to write new article about the Ethiopian political refugees, use the form above.

Share the Ethiopian Refugees page with your services through the buttons below, at the left column or at the bottom of the page. Thanks.