The Tragicomedy of Democracy in Sudan!

The Democracy in Sudan has always tragicomic practices. The democratic experiences in the biggest country in Africa proved to be the democracy of the ruling elites, whether they are syndicates, military adventurers, or Islamic sheikhs wearing bikinis under their jubbahs! 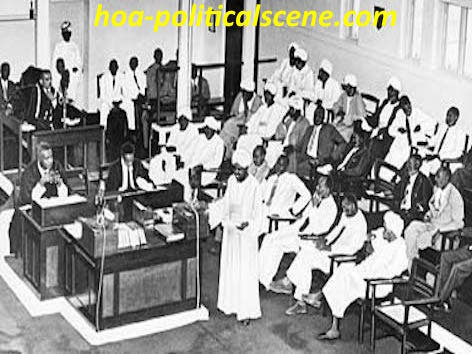 For this reason, the matter appears to be in whose hands that the democracy is relaxing and even sleeping, which proves that the democracy in Sudan is always nonsense for the public through the tragicomedy it plays on the political theatre of the traditional rightist parties.

When the theatrical tragicomedy reaches its climax, the military adventurers in the army who are actually allies to one of the sects take the gloves to perform a coup de état.

The prime minister, al-Sadiq al-Mahadi, had the favor of the coup, because his government was about to fall. 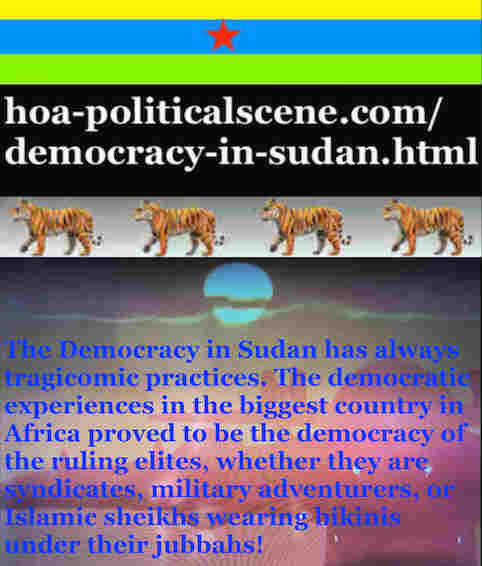 You see from this picture that, the Democracy in Sudan has always proved to be nonsense through a sort of tragicomedy played by the traditional rightist parties.

So, how could the Sudanese people move out of the tunnels of dictatorship, which have always been constructed by a non-national military and treacherous civil leaders of sects?

How could the Sudanese people move out of the dark tunnels of both, the military dictatorship and the civil dictatorship?

The people are (donkeynized) and the national treasures go to either the military or the civil sectarian and Islamic dictators to invest it in their Islamic banks. This robbery is well known and running in front of the eyes of the people.

In addition, through my personal long engagement in this political scene in the Horn of Africa (HOA) and according to the recent crises in Sudan and the call to submit the last Sudanese dictator to the International Criminal Court (ICC), I said long time ago, that neither the dictatorial regime in Sudan, nor the rebels are innocent. 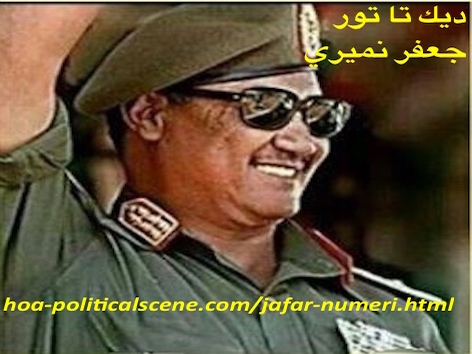 This is How Democracy in Sudan Being Fucked!

They have both committed political crimes. Justice channels should bring them to the International Criminal Court.

The political crises in Sudan are not in Darfur region only. What those International channels have done up to date is that they decided Omar al-Basher's indictment and issued the arrest warrant against him as the leader of the worst dictatorial regimes in Sudan.

Then the dictatorial regime falls under pressures from the USA to agree to some conditions to drop the arrest warrant.

The pressures will make this international power, which is the sole player in the international political scene able to benefit with its allies from many recently discovered Sudanese national treasuries invested or not.

So this is one phase of the tragicomedy of democracy in Sudan.

This phase begins when those so-called democratic governments bring military dictators to refresh the civil dictatorship and bring it into power again to continue the evil circle of the continuing changes between false democracies and military dictatorial systems. 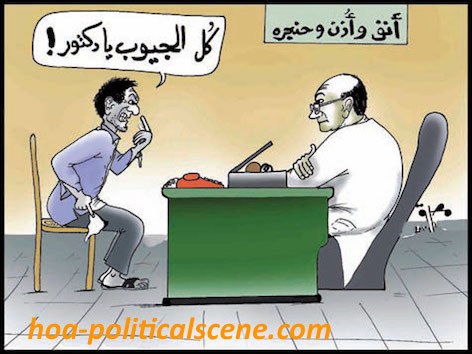 hoa-politicalscene.com/democracy-in-sudan.html - Democracy in Sudan: after being fu*ed badly has caused economical problems that escalate gradually to effect the citizens and the state.

I can't stress on this concept enough because it becomes a belief in those hard times of the Sudanese national history.

Unfortunately, the new generations, and let us presume that those are only four generations starting from the second dictatorial regime in 1969, the complete four generations have been blind and their abilities to good political understanding are leashed by either religious beliefs, or family and territorial tribal beliefs.

However, I believe there are only few well-educated and sophisticated people who stand against this tragicomedy in the Sudanese political life.

But, it is absolutely not natural when graduates from the universities ally themselves with traditional people instead of being sophisticate and modern people. 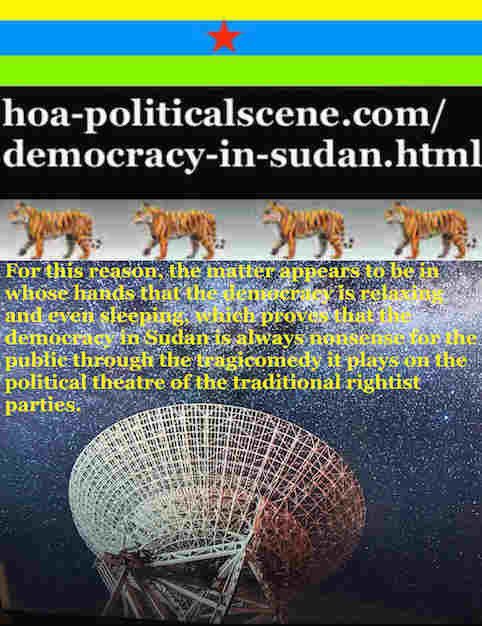 They forget that, hours, days, months, years and all the history goes forward not backward, and the beautiful history begins tomorrow.

We hope those will be our comrades, who believe in the people and their historical determinism. 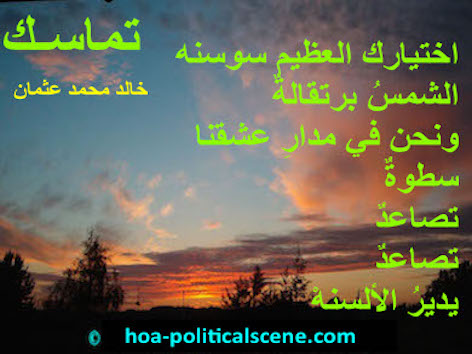 hoa-politicalscene.com/democracy-in-sudan.html - Democracy in Sudan: is a choice of destiny in the poetry "Consistency" written by the poet and journalist Khalid Mohammed Osman.

Want to read more articles about democracy in Sudan? Use the search tool at the top right column to find them, or just look downstairs.

You can watch democratic practices worldwide and democracy in Sudan on documentary film at TVCinemaApp.com. 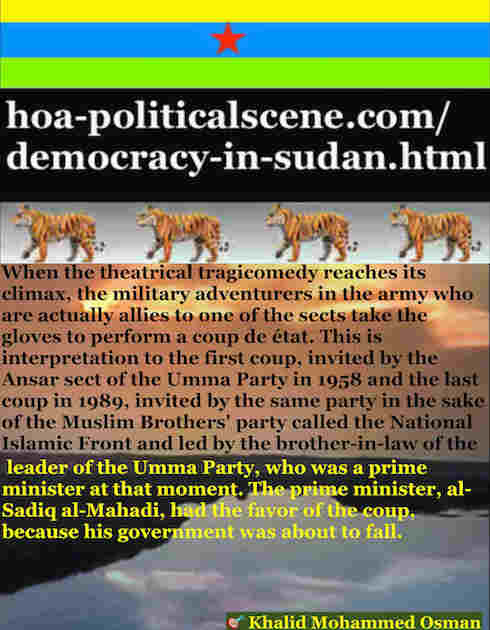 Link to democracy through the related pages below:

Think about Democracy in Sudan, as A Person Thinkth!

I think you have many things to say about Democracy in Sudan.

Use the following form wisely and responsibly to write comments on DEMOCRACY in SUDAN, or in any country in the Horn of Africa. You can use the form to write about democracy in general too. Thanks. 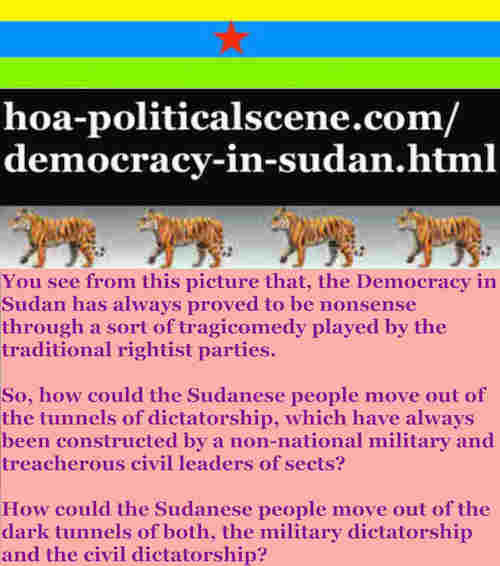 Democracy and Justice in Sudan!

Democracy and justice in Sudan do not mean anything to some international political powers such as the ruling system in the United State. Many people …

Democracy is Not for the Mass in Sudan!

The people of Sudan have misused democracy through their long history since the independence of Sudan from Britain in 1956. The results came as many …

There is no National Unity Government in Sudan!

There is no national unity government in Sudan. This is only a political shape to continue "donkeynizing", let me quote you using the very amazing expression …

Please share Democracy in Sudan with your services through the buttons below, at the left column or at the bottom.

New articles and Comment C2 Entries on democracy in Sudan appear at the section of the page below the comments form. 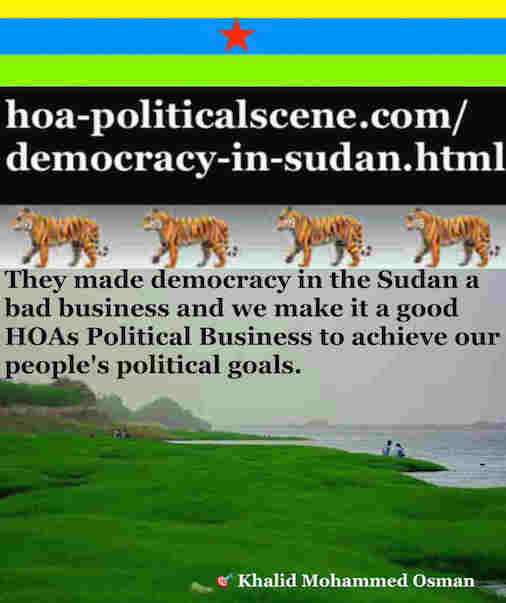 The Solo Build It Tools at the bottom empower this page about Democracy in Sudan and other pages about Kordofan here and TV Cinema App here! They empower actually the entire website. I love them because they make all website building and relevant technologies a snap.