The Horn Africas Bulletins Cover and Analyze the Political Events!

The Horn Africas Bulletins... well, the Horn of Africa's Bulletins are enjoyable to read... 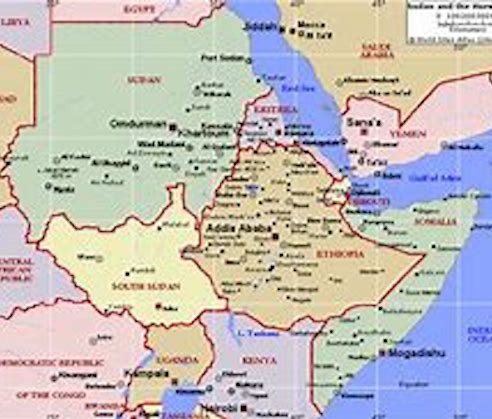 But, beyond  the joy of reading, they are knowledge mine completely with analyses from someone who has lived every political change in the Horn of Africa from within and sometimes working inside the decision making circles, in close relations.

The political analyses, articles, coverages and overviews are scattered on many bulletins in the HOA Network, which consists of the Arabic HOA and the English HOA Network, in addition to the main HOA page.

I just classified and grouped the political analyses, coverages and overviews into some bulletins, e-magazines, newsletters and zines.

This site map includes the editions of the Horn of Africa and the East of African's political newsletter starting from the issue number 28 to 36.

The official name of the Horn Africa's Bulletins is the HOA PoliticalScene Newsletter. It is important to mention this to avoid confusion. Newsletters, zines, ezines and journals are bulletins. However, they are e-bulletins since they are online.

They even highlight the political news and the political past of the area and discuss why the nationals in the area have not benefitted yet from the independence of many countries there.

Read my book, "The Political Tragedy of the Horn of Africa" at the right column to get more insights.

The first twenty-seven editions are on other newsletter's site maps, you can read through the site map of the Horn Africas Bulletins below.

But, the nine editions of the Horn Africas Bulletins on this page come with full descriptions for each issue of the East African's political newsletter.

To subscribe to the Horn of Africa's Bulletins fill the simple form you see on the top of the column at the left and confirm your subscription, when you receive the confirmation email, the system will generate, when you fill the form.

It is necessary to confirm your subscription, as this is a double opt-in list the automated system creates to protect your personal information. You will not receive any edition of the Horn Africas Bulletins until you click on the confirmation link in the email.

Then after confirming your subscription, download or order any of the e-courses you see on the page to read for knowledge, or to use and build your own bulletins online to make your life happier, as I explained at Choose It and the CTPM Process.

Thanks to them and you, even if you didn't become a member of this list and part of the HOAs Comprehensive Projects.

Who steals the dreams from the Northern Sudan?

The Sudanese military religious regime increases the chances of fragmentations by building barriers against the strong unity of the country. This was a precedent reading to the deterioration that followed and resulted in the secession of the South Sudan later.

This edition of the Horn Africas Bulletins questions the alleged Islamic orientation of the military dictators in Sudan. It calls the Sudanese nationals to plant trees by the names of their martyrs in many areas in the country and keep their candles light in their memorial days.

These events could be accompanied by political campaigns to revive the political life in the country and make the political street roars. Read HOA Calls and the Environment Protection to get more ideas.

The 30th edition of the Horn Africas Bulletins questions the American policy in Sudan and asks, what the American Administration cooks for Sudan and why.

The questions came after signing what's called the comprehensive peace agreement and during the preparations for the referendum in Southern Sudan. The Horn of Africa's Bulletins predicted the secession of the southern Sudan before it took place to divide the biggest country in Africa into two states.

This edition of the Horn of Africa's Bulletins (Horn Africas Bulletins) explains the challenges the referendum imposes on the unity of the country and the future threats that face Sudan.

This edition of the Horn Africas Bulletins highlights further the secession steps in Sudan and warns that when the south becomes independent state more secessions would take place in the other parts in Sudan and the entire East Africa.

The fact is that only "diamonds cut diamonds" in Sudan. The 32nd edition of the Horn Africas Bulletins calls the Sudanese to take strong actions to prevent the fragmentation of their beloved country and revive the political scene in Sudan by strong socialist network.

Since the Southern Sudan continued its internationally encouraged plan to secede, the Northern Sudan is factually the State of "Kizanistan". I created this term by combining the word "Kizan" in Arabic, which refers to the descriptive name of the Muslim Brothers in Sudan with "istan" referring to other countries with these names that end with the letters "istan".

So, it is clear that I invented this new conceptual name for the Sudan under the rule of the Muslims Brotherhood, the Sudanese people know as "Kizan".

This edition of the Horn of Africa's Bulletins covers also the steps the United Nations Security Council (UNSC) has followed to deploy new international peace forces in Sudan.

Here are some new political articles in the 34th edition of the Horn Africas Bulletins, as well as comments on old political topics in the Horn of Africa and East Africa.

There is a news story about a black Chinese in Sudan and a question here too. Did the war on terror end in Sudan? Read the answer or provide more answers to this question using the form at the linked page above.

This edition of the Horn Africas Bulletins reads the future of Sudan after two months during the period of the referendum in the Southern Sudan. It begins with deep sorrow and real condolence for the Sudanese while their country began to die gradually.

The 36th edition of the Horn Africas Bulletins describes how the equipments needed for the referendum in Southern Sudan became more important than the hungry Southern Sudanese people.

There is a question in this edition too about the reasons the media and the authorities in some states in the Arabian-Persian Gulf support the Sudanese dictatorial regimes.

Since the Horn of Africa's Bulletins continue to grow and appear in many editions, it becomes important to index the other site maps on this page to help you reach important pages in the network.

But, it is better to subscribe to the Horn Africas Bulletins to follow our updates. You can also share the Horn of Africa's Bulletins, the Site Map 31 in HOA with your social media services through any of the buttons on the page. Thanks.

Use the following form to comment on the Horn Africas Bulletins.

Comments on the Horn Africas Bulletins appear on this spot below the Comment C2 Entries page. When they exceed 50 political commentaries, the surplus would be distributed onto the other bulletins site maps and Comments on Sudan, Eritrean Political Comments, Readers Write Comments, Somali Arabic Comments and Somali Political Comments.