Before you get the fruits of Abu Damac the Sudanese mythology tells us about, you may need to join Abu-Damac, if you are intellectual Sudanese, have literary concerns and you are socialist and believe in that your Sudan should be secular. 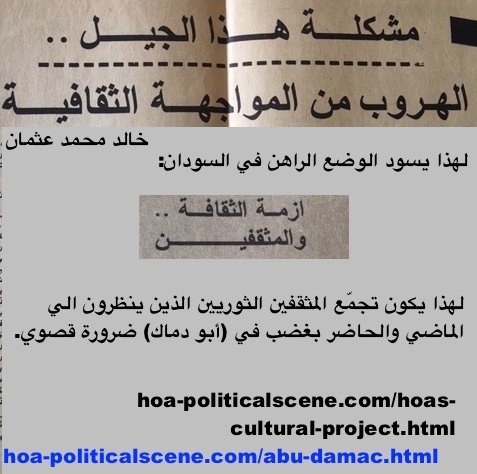 We have already a WhatsApp Group by this name and some members in Sudan, the regional neighbouring countries and overseas in good positions in humanitarian and political leaderships.

Use the form below to write your CV, if you wished to join this revolutionary group. Be credential، reliable, responsible and trustworthy, when you apply. Thanks. 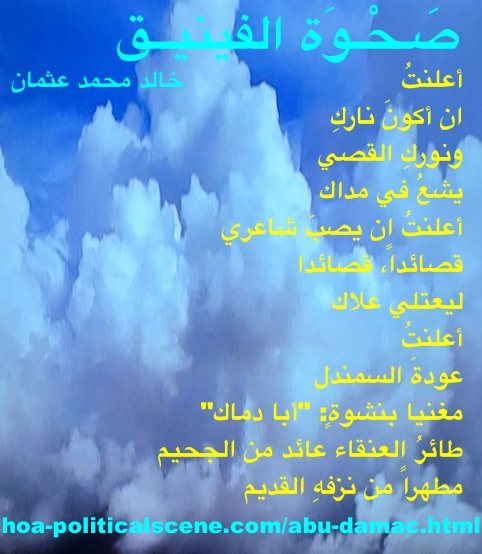 During the first Sudanese cultural absenteeism in the Sixties, the Sudan witnessed an emergence of artists, dear literary enthusiasts and intellectual Sudanese to create a group using the name of their ancient god, Abu Damac in what they have called that time the "Forest and the Desert Movement", or the "Bush and the Desert School".

That was exactly the period when the Sudanese Communists had a strong prosperity with political and cultural engagement in the root level of the people's lives and then suddenly their political umbrella has collapsed by a simple mistake taken in 1969 and ended in 21 July 1971.

An experience every sincere communist should regret, because that mistake has taken the Sudan back, as the failure has resulted in the continuation of the political absenteeism policy led by the Sudanese Political Parties for the favour of the Muslim Brothers to take over power in 30 June 1989 through a military coup and since then the Sudan is still under the Military Religious Regime.

The fatal mistakes are horrible mistakes and unbearable... and for an entire integrity of around 55 million people they cost so much. They cost Sudan losing the South Sudan and destabilising other regions in the west, such as Darfur (see Coalition, Darfur Crisis, Darfur Rebels, Fur، Save Darfur Coalition), Nuba Mountains, the Eastern Sudan and the Southern Sudan again.

The Sudanese Communist Party didn't mean such things to happen, I am quite sure. But, somehow in the morality values of the party, which the party used to defend itself, the party has lost its instinct to lead the 1971 movement in the right path, although the grassroots was ready, set on the furnace of the fire and was eager to achieve dramatical changes in the political future of the biggest state in Africa towards Socialism. 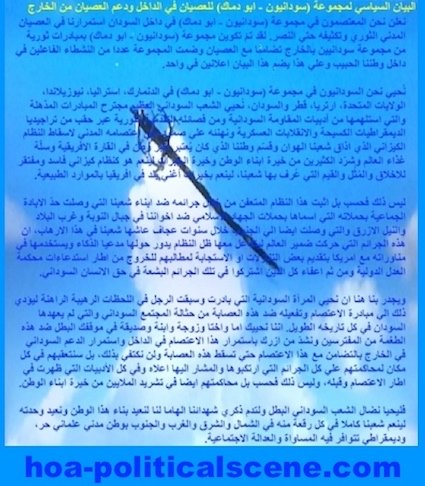 Whatever would be said in this area, except this fact would be partial of the correct analysing failure. I was there, in the furnace of the fire, of the period working with some colleagues in the Sudanese Labours Club during the school holidays.

Some sincere democracy fighters have also predicted the future for such failure to produce a reversal party coup, which in fact was the coup of 1989 with its status-go and the fragmentation of the biggest state in Africa and the fragmentation of the party of the Muslim Brothers into wings. The wings are in fact octopus arms to insure the continuity of the Muslim Brothers even by other names.

Everything that has happened in this deterioration from the left to the right and then the dilemmas brought by the rightists to cause the deterioration of the entire state roves that in Sudan they still don't see how to achieve positive secular thinking to shift the way they think about politics.

The bad impacts on the state of Sudan are much than this. Many political parties more than the state could bear have emerged and among them are parties built with Arabic claims (in a multi-ethnic-state) following some bad examples of Arabic parties and even by the names of Arabic parties, all of which have already failed in their original countries, such as Iraq and Syria.

After its climax in the sixties, Abu Damac movement clutched with the shifting of the Sudanese political scene and the failure of the Sudanese parties to come even close to the philosophy of Abu Damac to create the equality between all Sudanese and to stop marginalising many regions.

Yes, the neglecting was just because the state leading minds thought the leaders of the literary group, Abu Damac are communists and they even has lost the clue to be inspired by the group and to let the reflection of that inspiration to reflect in turn on the policies they cock for the one million square mile state. They had the inspiration and they have lost it.

And that was not a coincidence! They meant it because the leaders of the state are from big dominating sectarian families who became governing elites who are determined not to let the characters and the high ranking status they owned after the independence to sweep away.

And how that selfishness could rule a one million square mile state and gamble by the futureof the state up to this standard?

Now, all of this construct the most of the must for us to get together as sophisticated intelligentsia to restore the inspiration of pur mythical god and be gods. Everyone is a god of his own, or a goddess of her own to create a better future for a really modern, democratic and most of all secular state, where there is no way for the religious phobias to dominate.