Coronavirus Conspiracy is a Scheme!

Coronavirus Conspiracy, as you read on COVID-19 Conspiracy is one of the global conspiracies that have been running in our world since the earliest days of the scheme to dismantle the greatest Union of Soviet Socialist Republics (USSR) and fragment at the same time the Eastern Bloc. All of which has existed from 1922 to 1991 and continued to develop decade after decade. 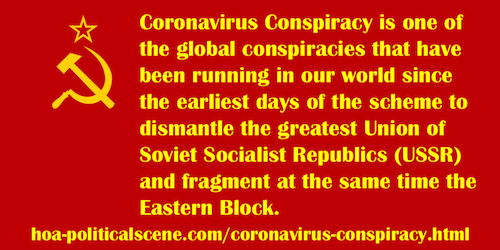 hoa-politicalscene.com/coronavirus-conspiracy.html - Coronavirus Conspiracy: is one of the conspiracies that has been planned by the capital power since the Cold War to dismantle the USSR and fragment the Eastern Block.

At the first page you read by the title "The Destruction of Global Political System Balance Began from the Afghani Gate", which was the last paragraph on that page, you read "Let's get back to the starting point of destructing the global political balance from the Afghani gate..." Here, I continue:

Each of the destruction has been carried out by the capital power. Nowadays, the world seems to have lost its memory.

The last one is still going on... as it has created climate change, which in turn has created epidemics, just like the one we have at this time (13 March 2012) which is called Coronavirus disease (COVID-19). 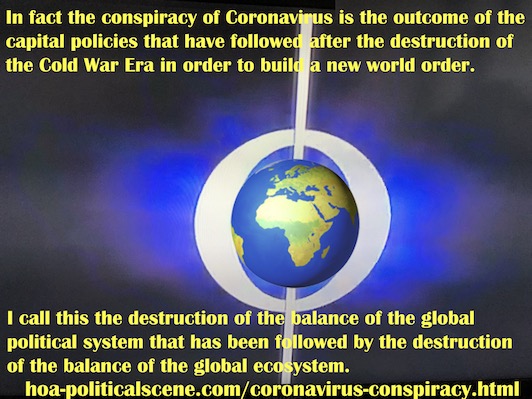 hoa-politicalscene.com/coronavirus-conspiracy.html - Coronavirus Conspiracy: is the outcome of the capital policies that have followed after the destruction of the Cold War Era in order to build a new world order.

How was that started at the Afghani gate?

The situations in Afghanistan began to change earlier before the eruption, which has been coincident with eruption and what is called the 1979 Revolution in Iran, which was not a revolution, but the engine of the chaos that has followed to destroy Afghanistan and Iran until recent days.

The fall of Shah Mohammad Reza Pahlavi hasn't brought Iran any good. While the personal ambitions and conflicts between the leaders of the Afghani Saur Revolution were the corner stone in the destruction of Afghanistan. The Soviet Union was in a position of distrust to Afghani political leaders despite the Afghani Friendship Treaty of 1978.

Yes, world... I am going to bring your memory back to clean the dust of the international media from your eyes and your ears.

This is because of the fact that Coronavirus (COVID-19) ISN'T SUCH A KILLER DISEASE that has happened thus from nowhere. It is planted in the atmosphere by insane industrial development driven by the power of the capital. 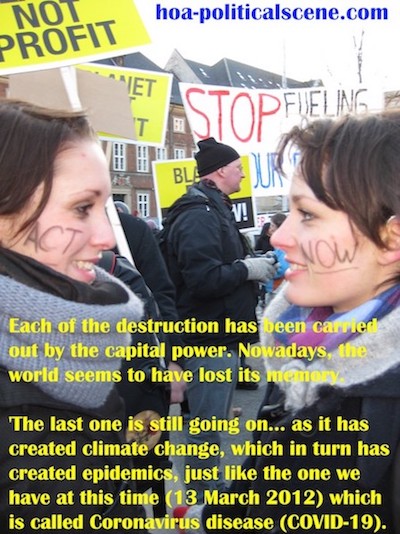 Coronavirus Conspiracy is Powered by the Capital Power!

Everything that affects the Ozone affects life on earth. In Climate Change, you read about how big industries of accommodations in the world produce hazardous waste and how they have been accompanied by more damaging industries of bacterial, chemical, microbial and nuclear weaponry.

The late industrial development has happened coincident with the scheme to destructing the balance of the global political system. So, sever climate change has happened following that and it produced what are know as natural disasters and epidemics.

The Afghani eruption, along side with the Iranian unrest are not events that have been created by the nationals in the countries. They have been assisted and developed by international powers that have interests in the disruption of that world.

That interference has always been fueled by the power of the capital.

The Afghani and Iranian Gates!

To prove the role of the capital power in the eruption of these countries look at this history:

There were two different scenarios but they were running to achieve one goal in the kingdom of Iran in 1941 during the Second World War, when Great Britain and the Soviet suspected that Reza Shah was going to cooperate with the Nazi Germany to get rid of their authority over him, so they occupied Iran in August and forced him out of power into exile in Mauritius and worked with his son Mohammad Reza Pahlavi who become the monarch.

It is so strange that how history changes in Iran... after 38 years, France paved the way to the chaos of the revolution of the cassettes prepared by Ayatollah Ruhollah Khomeini in Paris to start his movement. When Pahlavi was toppled, Khomeini became the supreme religious leader of the Islamic Republic of Iran in 1979 and the Iranian chaos started.

So, that proves the intervention and domination of foreign powers that have always played the principal role in the deterioration of these nations.

In Afghanistan, the conflicts of the communist leaders (Hafizullah Amin and Nur Muhammad Taraki) and the support of the USSR have encouraged the capital power to play a role in the political development, especially when the scheme to dismantle the USSR and strip the Eastern Block from its influence and fragment it started.

Interestingly, the capital power had not sought to stand with any of the two leaders. That was obvious. The capital power took the opportunity of the development of events when the seeds of the terrorism group of Herat, which has started in Herat the third largest capital city of Herat Province following the unrest in 25 Afghani provinces out of 28 provinces on 29 March 1979.

So, the capital powers led by the United States of America has similar interests with Afghani rebel, or the seeds of the terrorist group of Herat to organize them and support them by weapons and logistics on 29 March 1979 to start the Afghani civil war.

This was how the Mujahideen have been created by the support of the capital power.

You'll be surprised about how the events has developed by the creation of Al-Qaeda of bin Laden. Don't you think this phobia created by the capital power is similar to epidemics exacerbation?

What Do You Think of Coronavirus Conspiracy?

* You can watch movies on Coronavirus, but not about Coronavirus Conspiracy on TVCinemaApp.com/tv-cinema-app-blog.html.