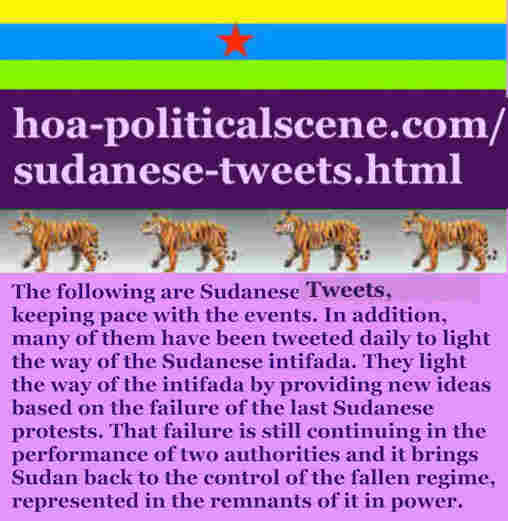 They light the way of the intifada by providing new ideas based on the failure of the last Sudanese protests. That failure is still continuing in the performance of two authorities and it brings Sudan back to the control of the fallen regime, represented in the remnants of it in power.

In addition to that the military sovereignty council, which is composed of the remnants of the Muslim Brothers' terrorist regime led by Omar al-Bashir before the fall is the real leader of Sudan, but not the transitional government, which is the fake authority to claim that Omar al-Bashir's totalitarian terrorist regime has changed and another political power is in its place.

I wonder not only in my articles, but also in Sudanese Tweets how could ignorant, selfish and stupid members of both of these shit of fake authorities forget that the Sudanese people are not ignorant and not stupid to this standard to believe their real intentions and interests, or that they are doing good?

Some of the Sudanese Tweets you will read here and of course on Twitter come in a series of tweets numbered sometimes until 5 and following each other, a tweeting process, which makes each of them in this series, or that a short article.

Short articles combined makes a long article to stand on its own. 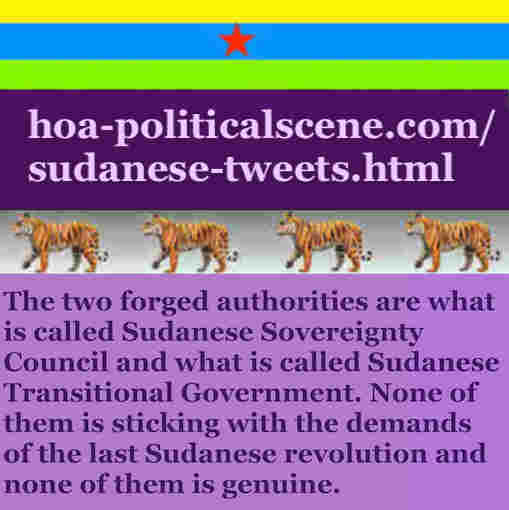 A full article in the form of tweets responding to other tweets on the current Sudanese events makes it not only to the point of fostering the right way of the right revolution, but nurturing the necessities of the modern civil / secular and united state:

It was not a spontaneous act or a coincidence that the leader of the Janjaweed militia stripped his uniform and replaced it with a civilian. There are those who plan and make unremitting efforts to market Mohammed Hamdan Delgo Himidty in the political and popular arenas to gain acceptance in preparation for the role of what is being prepared for him in the future. It seems that the Emirates axis is proceeding with a project of making a militia dictatorship here.

Exactly, as I mentioned earlier in my articles about the Janjaweed banditry. This will not be so long, as long as the vanguards of our revolution are still awake. Victory for the masses who revolt against sectarian religious parties, the plots of the Power of Freedom and Change and the remnants of the terrorist regime. No transition challenges, as long as the remnants of the terrorist regime of the Muslim Brothers Sudan are still in the authority. 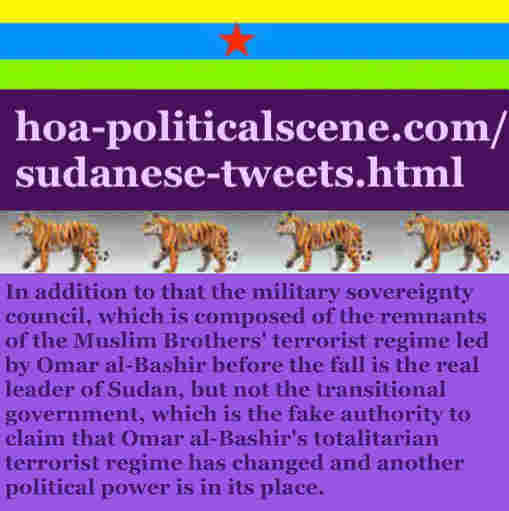 * Someone tweeted replying to Eng-dhab @sereza700 who criticized the Power of Freedom and Change:

Slaves of the Al-Qahwawi gang (referring to Power of Freedom and Change)! Oh my God, you are really a high-class and democratic man. In the interest of whom Power of Freedom and Change is demonized? Demonization of PoFC means paving the way for the alliance of the military and the Kezan (referring to Muslim Brothers by Sudanese nick name) to return again and begin to simulate people's feelings against PoFC until the military coup is accepted.

1- This is a complete lack of understanding of what happened. What happened is that the Power of Freedom and Change has sold the blood of the martyrs at the price of power, with the participation of the Janjaweed remnants of the terrorist regime in this authority. No transitional period challenges, as long as the terrorists remain in power.

2- Criticizing or cursing the Freedom and Change group is not paving the way for the military and the Muslim Brotherhood. Rather, the conspiracy agreement on the revolution is paving the way, sharing power and giving them opportunities to escape justice and empower the Muslim Brotherhood in everything that is happening now. No citizenship constitutional rights as long as the terrorist and fascist regime is still in power in what's called Sovereignty Council.

3- This is the qualitative difference in understanding and culture between us. It is a very vast difference. We have been following the historical development and methods of the Muslim Brotherhood since the 1940s. No one challenges us in this understanding and we do not accept political backwardness. The revolution is neighborhood committee and syndicate. No constitutional rights of citizenship exist with the Janjaweed terrorist regime in power and called by another name as the Rapid Support Forces. 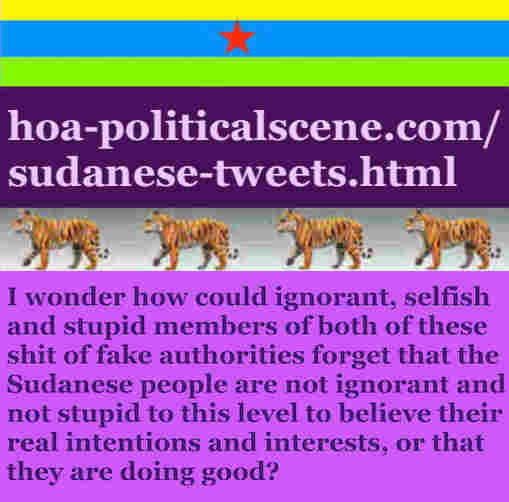 Sudanese Tweets for the Correction of the Minds and the Revolution!

As you see above, and you'll read also below, these Sudanese tweets, which respond to wrong impressions, or misunderstanding are playing as a correction of such misunderstanding. They are working at the same time as political enlightenments, which could further be of much benefits to setup the right Sudanese rising attempts.

Armed movements refuse to participate in the Legislative Council. Today, armed movements in Juba refused to participate in the Legislative Council because they were marginalized in forming the government and indicated that the Power of Freedom and Change recognized the Rapid Support Forces as a legitimate force, although they had killed thousands in Darfur and killed hundreds in the general command of the army during the people's sit-in and now.

Why does leader Abdel Wahed Mohamed Al-Nur refuse to join the Juba negotiations? What does the man want for the Lord sake? Is this tour not an opportunity for him to reflect his point of view, even if it ends up being nothing? Doesn't his position embarrass the government of Mr. Hamdok as well as Salva Kiir? For the umpteenth time I wonder: What does the man want?

I think, and God knows, that this is a clear position that he does not want to sit with killers in an illegal council, and from the position of the peace principals he will not be with killers who bring back the same Muslim Brotherhood to the balance. By negotiating, the Power of Freedom and Change helped the killers to commit the massacre. No Ministerial Council announcement, No Transitional Challenges with the remnants of the terrorist regime in power.

This single tweet is responding to those people who were tweeting and saying that people must ride the offered Janjaweed vehicles, which previously used by the Janjaweed gangs to break up the sit-in, claim the lives of the protesters, carry some of them to drown them in the Sudanese Nile, kidnap others, and rape the girls:

This is an alphabetical difference in understanding politics, which is (the way of thinking) that constitutes the current paradox in our political defeat as a revolutionary force, and the continuous defeat of the revolution since October 1964. No to the hashtag about the: application of transitional justice and no # transitional period challenges with the presence of the criminals of the totalitarian regime in power. 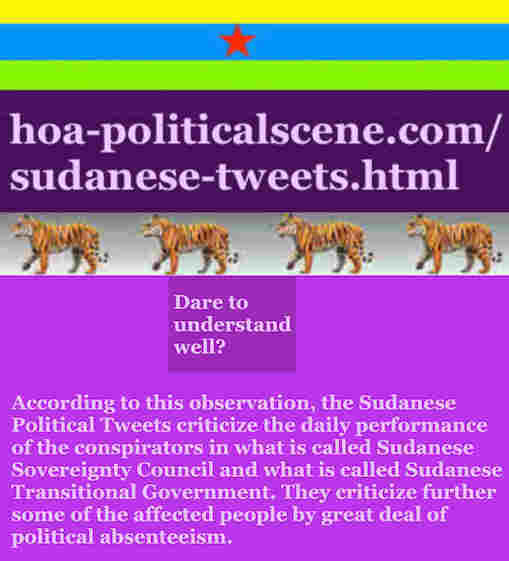 THIS CONTINUES ON HUNDREDS OF PAGES, REGARDING WHAT'S HAPPENING IN SUDAN.

BE PART OF THIS POLITICAL ACTION.

IF YOU LIKED WHAT YOU SEE... WELL, WHAT YOU READ, SHARE IT WITH YOUR FAVORITE SOCIALS WITH THE BUTTONS YOU SEE ON THE PAGE. THANKS.

YOU CAN USE THE FORM TO COMMENT, OR WRITE WHAT YOU WANT.

What Do You Think of Sudanese Tweets?

Let's read what you think about the Sudanese Tweets?

Use the following form to tell us your opinion. You can use the same form to write comments on SUDANESE TWEETS too.

You can watch many events in Sudan, and of course not including Sudanese tweets on documentary film at TVCinemaApp.com.

Comment C2 Entries on SUDANESE TWEETS appear on the section of the page you see above this paragraph and below the comments form.