The Somali Refugees Live Hard Conditions in Kenya and Elsewhere!

Few numbers of Somali refugees started to flee their homeland in 1973, when president Mohammed Siad Barre changed the political system. Siad Barre began his system after the military coup he led in 1969 as a socialist, but he changed the system in the 1970 following the great western powers. 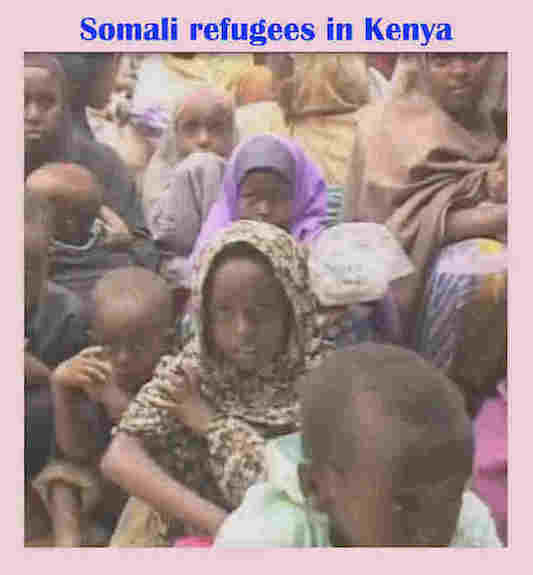 hoa-politicalscene.com/somali-refugees.html: Refugees from Somalia in Kenya.

Somalia becomes the first state in the Horn of Africa that has great numbers of refugees scattering in many places in the world since the beginning of the madness of the Somali civil war in 1987. Most of the Somali refugees have started their influx from Yemen and Kenya.

There are more than 600,000 Somali refugees in Kenya, as the Kenyan government stated in June 2013. However, many of these refugees have not yet been allocated.

Angelina Jolie during her visit to the Somali refugees during the UNHCR operation in Dadaab, Kenya!

In the Dadaab refugees center the numbers of refugees who fled Somalia to Kenya reached 279.000 Somali refugees in 2010, where the humanitarian agencies found the most poor and vulnerable refugees in the world.

They are still endangered by hunger and malnutrition and some ceases such as the cholers, along with many abandoned Somali babies, who have been taken by foster families to raise them.

Some 44,000 Somali refugees are allocated in some refugee camps in Ethiopia. However, many refugees from the Somali occupied region of Ogden by Ethiopia have already fled to some countries in Europe and to America.

The numbers reached more than 15.000 Somalis who fled to Aden only in 2008 during the continuation of the civil war and when the main warlords witnessed fragmentation in their fronts and some new warlords appeared in the Somali political scene to escalate Somalia's political problems.

The warlords are driven by the Somali composition of clans and religion and they even used some refugees in Somalia and recruited many of them in their fronts to face the other warlords they opposed.

The so-called religious group of Alshabaab recruited many Somali refugees abroad and some Somali displaced people promising them by wealth along with the paradise to join them in their holly war in the devastated state of Somalia.

Many of the Somali refugees have fled in 1970 to the Gulf States where they worked and started their own businesses. Some of them, especially those refugees from Hargeisa have joined the Somali National Movement (SNM) which have taken that part of Somali to form the Somaliland.

The Somali Refugees in Kenya!

More than 46,000 Somali refugees living in the Kenyan capital city of Nairobi are unregistered refugees. They face violations to their human rights, discrimination and there is no humanitarian authority to protect them from the Kenyan police harassment.

The United Nations High Commissioner of Refugees (UNHCR) says an estimated 169,000 Somalis have fled their homes in south central Somalia. Out of those numbers, 12,000 Somalis fled to Kenya and 6,500 fled to Ethiopia and 9,400 to Yemen.

When the Somali civil war began in 1987-1988, the numbers of Somalis fled to Djibouti reached 30,000 Somalis and increased to 78,000 Somalis by 2005. Many of those Somalis cross to Yemen and many of them found chances to flee to Europe and the United States.

Kenya closed its border with Somalia in 2009. However, closing of the border did not stop the flow of the Somali refugees to the country. The numbers escalated and many refugees infiltrated among the Kenyan Somalis living already there as Kenyan citizens.

The International humanitarian agency, Oxfam said in a report that time 250,000 of the Somali refugees face humanitarian emergency in serious public health crisis in the Dadaab refugee camp in northeastern Kenya. Some 50,000 Somalis out of these numbers were relocated in Kakuma camp.

However, with the absence of adequate international observation, or perhaps neglect of the matter, the Somali government and the authority in Kenya recruited hundreds of the Somali refugees in the Dadaab refugee camp and among them were children to fight al-Shabaab rebels in Somalia.

Many refugees from Somalia who live now in Eastleigh east of Nairobi are Somali urban refugees. They are vulnerable to many kinds of abuses in addition to deterioration in their health conditions.

Since there is no one to help them, many of the women with their children there sell fried local food like sambosa, then pay high tax to amend the poor infrastructure, and they may be even paying bribes to stay living there in Kenya.

In addition to the Somali refugees, you may also be interested in the following Somali humanitarian topics:

Read also the following relevant pages to know more about many Somalian topics:

Do You Just Want To Be?

Taking good photos is easy! Take pictures, upload them to your computer and then upload them through any form on the relevant page to your topic.

Add captions describing the pictures and you are all set to run your image gallery on the HOA's Political Scene Network.

Any news or political analyses about the Somali refugees falls here through the form at the bottom of the page. However, if you want to write about the Somali cultures, do that at the HOAs Cultural Project.

Use the comments form below to comment on the Somali refugees.

Comments on the Somali refugees appear at the second section above these lines and below the form. If you have not commented on this topic about the refugees of Somalia yet, please do that now.

I use the strong website building and optimizing tools on the image below to empower the Somali refugees page and the entire website. Visit and read about these tools to know what they can do for you. Click on the image.