The Ugandan Political Problems are Yet to Address! 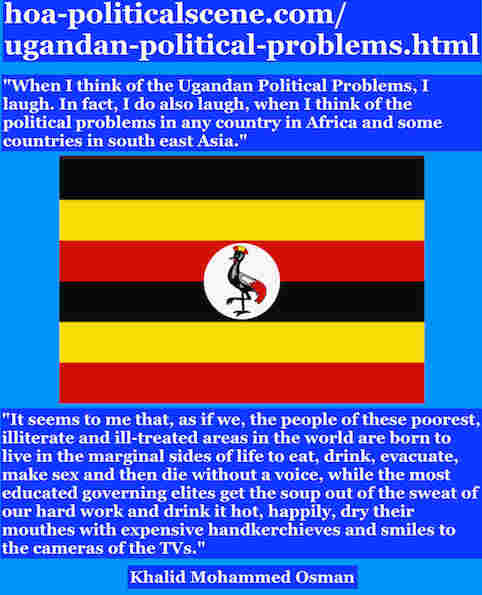 It seems to me that, as if we, the people of these poorest, illiterate and ill-treated areas in the world are born to live in the marginal sides of life to eat, drink, evacuate, make sex and then die without a voice, while the most educated governing elites get the soup out of the sweat of our hard work and drink it hot, happily, dry their mouthes with expensive handkerchieves and smiles to the cameras of the TVs.

The sarcastic pictures that jump to my mind from the political problems in Uganda and the political problems in the rest of the poor world are primarily originated from the time many poor states in the two area got their independence and then they escalated in the absence of real presence of constitutional administrations and development programs. Yes, there are exceptions concerning few well developed countries there.

Just get a backward look to the development of politics in the entire areas of the poor world from the day many states in this world got the independence, see the kinds of governments, elected or came to power by coups, or monarchies and see the progress of the national programs in any state.

But, the problem is pertinent to the lack of separation between the three powers, legislative, executive and judicial. When the legislative power bestows or confers between the head of the executive power (the Ugandan president) and the parliament or the National Assembly of Uganda (legislative power), then all of the decision making circles are morally depraved.

That makes the government of Yoweri Museveni a "hybrid regime", as stated by the Economist Intelligence Unit, while rating Uganda. But, not only that's true, as the combination of legislative and executive passes on fraudulent political plans, which make a sole puppet of political destiny. The creation of dictatorship is inevitable. 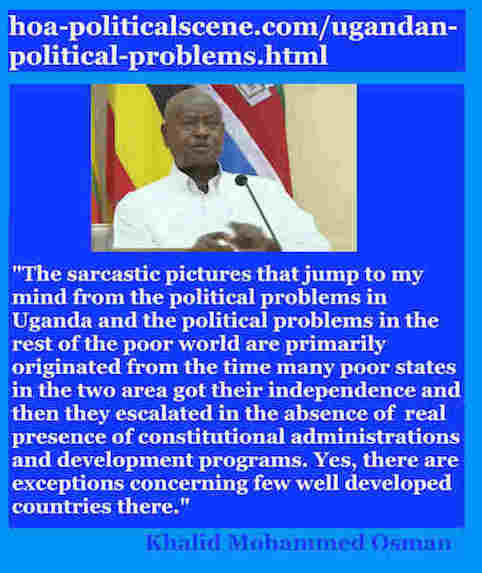 In addition to controlling and thus affecting the legislative and executive powers, the president is the commander-in-chief of the Uganda People's Defence Force. While that is present in many states worldwide, but, it makes ideal of the president to use the army for his sake (e.g protect his regime). The right constitution should decrease the effects of president to low level in the term of commanding this military power (e.g concerning external threats).

While these are two elements that might produce totalitarianism and increase the Ugandan Political Problems, the third aspect is having the Ugandan president Yoweri Kaguta Museveni to influence the third juridical power by constitutionalizing that, which in term could end by giving the president and or any executive in the regime political and diplomatic immunity (e.g exclusion of conviction in corruption, or any crime).

So, the Ugandan Political Problems are due to readymade totalitarian system constitutionalized by giving the president Yoweri Kaguta Museveni top hand in legislative, executive and judicial powers.

These three elements in the Ugandan Political Problems go head and shoulder with other general causes of the problems, which include ethnical and regional territorial issues and the use of political power to acquire personal interests. Just when you look at one example and see that the president was elected five times to rule for than 30 years, you will understand that long-term presidency means dictatorship.

But, how could the president do that and still want to run for a another term in leadership?

Once more, that's because it is authorized constitutionally to do so and be the only person to be granted the laws according to his wishes. So, this is one phase of acquiring both the executive and legislative power. It is the top hand policy of presidency. 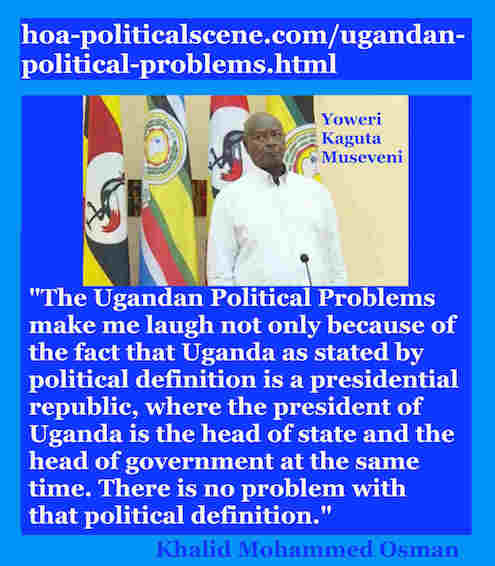 Ugandan Political Problems of Other Origins!

The other Ugandan Political Problems that rise of different public issues are concerning the society with all of the mechanisms it has in the public sectors and the private sectors. By such definition, they are also political problems of social issues, whether at the levels of the local societies, or at the levels of the regional and territorial parts of the country.

Although the system of the state creates these Ugandan Political Problems, but from the point you have already read on the last lines, you will see that they nurture in the public society and amalgamate there to revert again to the system of the state. So, this is why they are found on all levels, since the independence of Uganda on October 9, 1962 from Britain.

The British colonizing power controlled the land since 1894 until independence in that date. The land had been ruled locally before the British by organized kingdoms with chieftain ruling in the Central African lake regions.

The national ruling elites have not infiltrated the merits of the Ugandan history as a land of people composed of organized kingdoms with chieftain ruling in the Central African lake regions to plan and present a nationwide optimistic project to create the new independent state right.

The required national scheme for the new state should have been setup by a well drafted constitution that shares power and wealth between the different regional and territorial areas, accompanied by well educational system to create national awareness based on national unified  goals to decrease the high levels of illiteracy and raise the people on national values and virtues.

Any society that is composed of localized kingdoms and ran with that for a long time should have in first place educational plans to work through the first decades of independence to treat that situation and introduce the new ways of administrating the new state.

Instead of the right nationwide transformation to a new independent and modern state, just immediately after independence Buganda crisis started from 1962 to 1966 and Milton Obote appeared to lead the government with King Muteesa and then tried his own way to rule the state alone.

He abolished the ceremonial president and his vice-president and proclaimed Uganda through a constitution in 1967 as a republic and ended the kingdom. Since that date, Uganda has been transformed into dictatorial systems from the insane Idi Amin from 1971 to 1979, where 500,000 Ugandan were killed, to the return of Milton Obote from 1980 to 1986 and then Yoweri Museveni from 1986 until now. 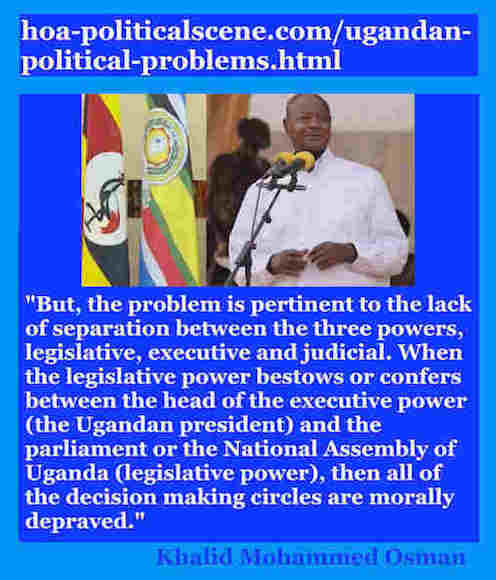 The vibrancy of the modern society have been toppled since then by the lack of the right constitution with all of its ingredients and in place to create the modern free, democratic and secular state, which is a demand of new centuries in all of the world, not just in Uganda alone. 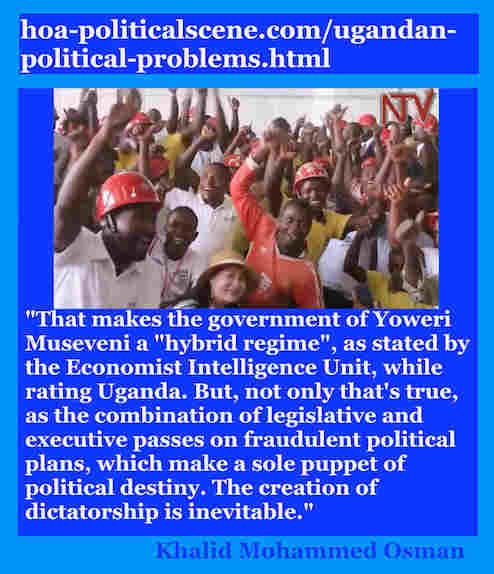 I have much in my mind to say about such serious Ugandan issues, including the Ugandan Political Problems that are still running on the Ugandan Political Scene to make the Ugandan people's life better, not only locally, but regionally by playing important role and not in the corpse of the Intergovernmental Authority on Development, which is called the IGAD, but in a new form of the Horn of Africa's umbrella, which I call the United States of the Horn of Africa. The USHA project is fundamental for such united states.

Use the second comments form to comment on Ugandan Political Problems. When you comment, you'll get a page by your full name on this network. This is of course, if you provided your name and wanted it published. When you find your page published, share it with your social. Use the first form, if you want to be a freelancer with the network. Thanks.

Are you from the area? Do you know what is going on? Are you fluent in English and Arabic? Freelancers required! Fill the form here and provide details about you and a summary to current news or one new political topic analysis.

This is the comment form to use to comment on the political problems in Uganda. You can upload pictures too with your comments. You can use the form also to write about Uganda.

There are some other Ugandan topics at: Uganda Country Profile, Uganda News and Uganda Political Refugees.

Comment C2 Entries on Ugandan Political Problems appear on the section of the page above these lines and below the comments form.