Write about Chad, or Read about It!

Write about Chad or read about Tchad is the site map 23. This site map has pages written by the readers of the newsletter and visitors of the HOA Political Scene. It also includes comments added by you or other visitors. 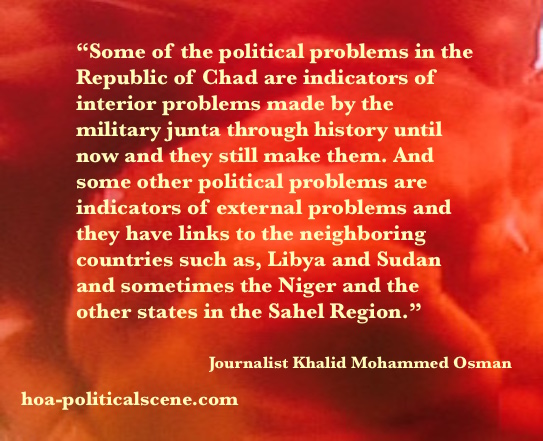 As a directory, it is simply planned to organize the entire HOA Political Scene Blog’s Network. There are 14 primary sitemaps and more than 20 secondary site maps in this network.

Most of these site maps are supported by a bilingual blog at the Arabic HOA Political Scene Blog to translate some pages here into Arabic and make it possible for some other people who cannot read in English. This bilingual blog has some Arabic articles I wrote about Chad and it will get some articles and comments when you write about Chad too.

The idea is to expand the network to reach many people in Africa and the Middle East, in addition to other people who can read in Arabic in other parts in the world. they could also use both of the bilingual blogs to write about Chad or comment on articles readers wrote about Chad.

How to Understand Politically While Reading about Chad?

The first element in good understanding to such issue is to read what people wrote, or still write about Chad with an open mind.

The open mind helps you get through to understand the backgrounds of a specific issue and then follow to the development of such issue, being it a political issue in Chad, or any other state, or being it a different issue.

But, that is not all you need to get in the mode of good understanding to any issue, whether it is political, or not.

That means there are some other elements in good understanding. Good understanding depends on the way you have been brought up, your education and the basics of your concerns.

It depends also on the way you evaluate what you read. Well-minded people with secular beliefs understand things better. Social concerns also make that kind of understanding easier. It brings you closer to people.

When you get closer to the people you feel their sufferance and understand the development in their surroundings.

The includes are on the main site maps and the secondary site maps, as well and they are categorised in the following to make your browsing on the website easier.

The primary site map 3 A, Eritrea

Use the following form to write about Chad. Write poetical articles about Chad in this form. If you want to write prose, prose-verse, short stories, novels, plays or critique in arts and culture, do that either by using the form at HOA's Cultural Project, or the form at HOA's Poets Project.

Comments on Write about Chad, or about the state of Chad appear at the section of the pages below the comment form.