HOA's Common Sense is simply your sense, when I put myself in your shoes, but I see the world differently than the way you do. It somehow, has been developing to make you look at global problems differently too and contrary to what your government wants you to believe and behave. 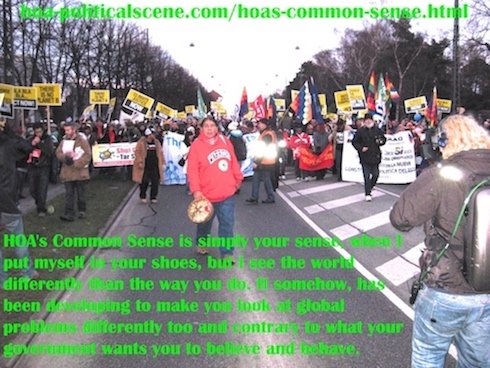 hoa-politicalscene.com/hoas-common-sense.html - HOA's Common Sense: helps you understand global degradation with the illumination it harnesses in the LPE for the Age of the Masses to solve global problems.

So, the common sense of HOA Political Scene helps you make sense of the global deterioration by learning from the illumination it has in the LPE of The Masses Era to solve global problems. The LPE Theory contains in addition to citing and analyzing the global disasters a global system building tools.

How the tools work depends on absorbing the initials of the global disasters first and seeing these disasters from different angles from the angles of the experts governments use to analyze the disasters and provide solutions.

The experts of crises management and the experts of conflicts crises, economical crises and environmental crises will not provide solutions that harm their appointers, but will try to satisfy their governments. 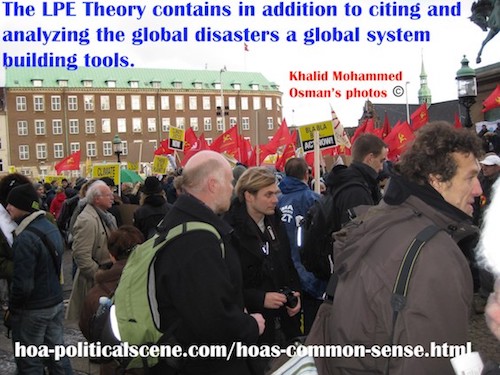 This is obviously because most of the problems are created by heavy industries including military weapons manufacturing and space invasions. The governments use agents on each of these fields of industries and the agents are big companies ruled by the power of the capital. 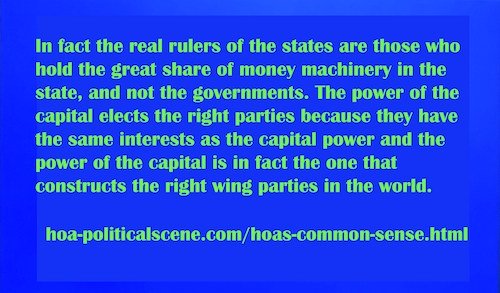 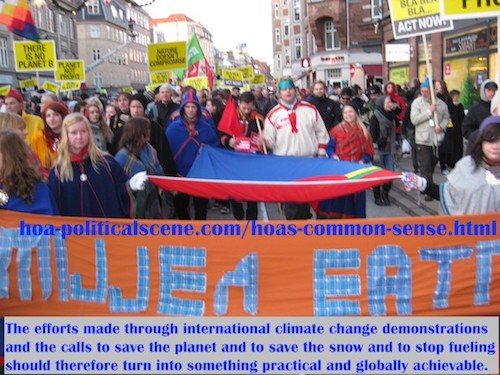 hoa-politicalscene.com/hoas-common-sense.html - HOA's Common Sense: The efforts made through international climate change demonstrations and the calls to save the planet and to save the snow and to stop fueling should therefore turn into something practical and globally achievable.

The first starting point of HOA's Common Sense is the process, which has been planned by one of the schemes of the capital power to end the Cold War Era, a process which produced the collapse of the balance if the Global Political System to pave the way to the capital power to rule the world.

The second pointer of HOA's Common Sense is climate change caused by the mentioned heavy industries of the capital power, which have produced climate change by collapsing the balance of the Global Ecosystem. Climate change has already turned into epidemics, such as coronavirus (COVID-19).

The Collapse of the Balance of Global Political System!

This is the hardest event in human history, which has caused huge human crises and resulted in the massacres and displacement of millions of people and caused many powerful lands ruled by anti-capital power systems to spilt and became small weak nations.

If we compare the crimes that have been committed during the running of this scheme in the Eastern Bloc only from the late eightieth with any crimes in human history, we will not find a good comparison.

Strangely, you might not find results when you search for the victims of the political changes in 1990 in any of the following states: Albania, Bulgaria, Czechoslovakia, East Germany, Hungary, Poland, Romania and USSR, especially in the area of Chechnya in which the global capital power had influenced and used Islamic States to create the human crises. I include Yugoslavia in these states although it was one of the powers of the non-aligned states.

All you will read in the sources that provide the results of such search on victims is only the victims of the communist powers, but not a single mention to the crimes that has been produced by the polices and plots of the capital power against these states.

In addition to the crimes committed in the Eastern Bloc, the spilt of large states in that bloc during the collapse operations has been a painful cost of the policies of the capital power against that bloc.

The Collapse of the Balance of Ecosystem!

Although climate change is an old issue, but the severe impacts of climate change has exacerbated coincidently with the process to end the Cold War Era and destruct the balance of the global political system.

Despite the call and the peaceful demonstrations environmental activists made to encourage governments to change their policies, the increase of heavy industries continued and many destructive weapons have been produced to fuel conflicts in many parts of the world.

The global scheme mobilized by the capital power spreads to support governments in the Middle East to fight terrorism. The leading lands which have been involved in this capital scheme are the same lands that have worked with the global capital power to organize the first cells of the terrorism groups during the operation to destruct the Soviet Union and the Eastern Bloc.

Climate change has produced epidemics following the warming of the earth and the melting of the snow until the snow is no longer falling in many known snowy lands.

The efforts made through international climate change demonstrations and the calls to save the planet and to save the snow and to stop fueling should therefore turn into something practical and globally achievable.

Radical changes should be made in the global political systems. This why the LPE of the Era of the Masses has come to prepare the fundamental methods and tools to change the world and the classical way of ruling in every state in the world.

Check the Global Dynamics to know the requirements of the Era of the Masses and how to achieve that through the global revolution of the masses.

Have Something to Say about HOA's Common Sense?

* If you had anything to say about HOA's Common Sense, say it. Write comments on HOA's Common Sense on the form below. When you see your page published, share it in good media sites. You can print the pictures to fix everywhere in public places. Thanks.

* You can watch movies, including the conspiracies I explained on the Global Dynamics of HOA's Common Sense on TVCinemaApp.com/tv-cinema-app-blog.html.