What are the Kenyan Political Problems?

Political indicators told us that the Kenyan Political Problems started few years after the independence of Kenya in 1963 and exactly in the second term of the reigning of the second Kenyan president Daniel Arab Moi. 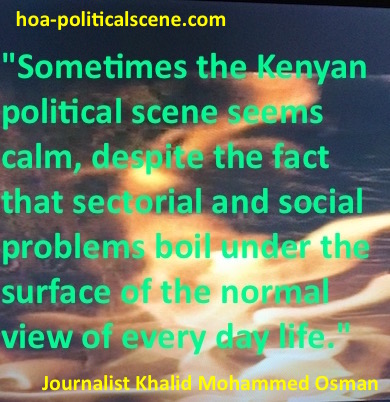 hoa-politicalscene.com - Kenyan Political Problems: The Kenyan political scene seems calm, despite that sectorial and social problems boil under the surface of the normal view of every day life.

In fact, the indicators are not only political. They are also sectorial and social. They may be accurate and up to the points and they may also be wrong in some levels while spotting factors.

If you saw something wrong, through Kenya's political problems, please correct it by using the comments form near the bottom of the page.

Sometimes the Kenyan political scene seems calm, despite the fact that sectorial and social problems boil under the surface of the normal view of every day life

While sometimes religion adds something challenging, but in fact it is one of the social elements of the challenges, which include ethnicity.

It is very interesting to say ethnicity in Kenya, although according to the demographics of Kenya the land is black and it is owned by Africans. That means there is not serious numbers of non-african who can change this fact.

In the Great Lake region in East Africa the population of Kenya have reached 45 million of Bantu, some Cushitic ethnic minorities and Nilotic population.

The minority of Arabs acquired the Kenyan nationality and they are few numbers from Hadhramaut and Oman. They live mostly on the coast in cities like Mombasa.

There is also a minority of Indian descendants from Indian residents in 1896 and they came as labours from India to build the British railway. Many of those who become Kenyan Indians came from Gujarat.

The census in 2009 estimated 46,782 as Kenyan Asians and those who don't have Kenyan nationality/citizenship are 35,009. Kenyan Europeans are 5,166 and there are 27,172 European in Kenya without a citizenship. 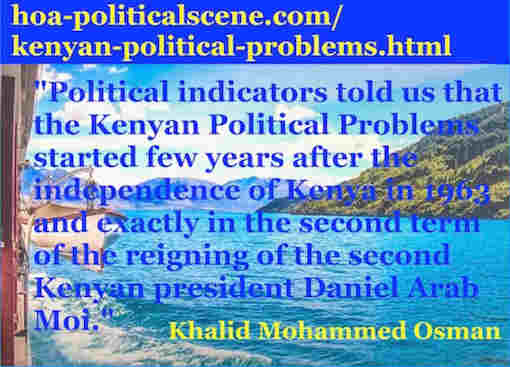 Kenya's Political Problems are Due to Insufficient Constitution!

The national expectations in Kenya after its independence on December 12, 1963, like the expectations that had emerged in many African countries after independence, are that citizens will enjoy a brilliant future after they have gained their independence and freedom from European colonial states. But those expectations and dreams that accompanied the citizens to enjoy prosperity and sustainable development and prosperity soon faded away after a few years of independence. 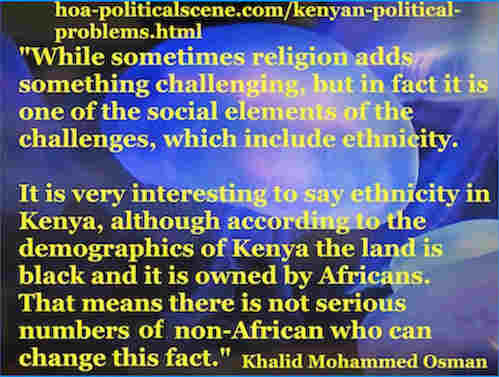 Take, for example, the instability that followed the independence of many countries. There has been instability due to riots and rebellions, such as in Kenya and Sudan, which have led to ethnic violence. Ethnic violence led to the initial instability of national governments and, consequently, to military coups. These constants in political development are clear evidence of the absence of national constitutions in the true sense of the word constitution, through which a fair distribution of power and wealth is made.

The first period of national governments was accompanied by political and administrative corruption among the ruling elites and a major focus on building and strengthening political parties that lead the authorities and form governments at the expense of pressing national issues that should have been taken care of by the parties of power. Attempts to assassinate national leaders have also occurred in some countries. In general, the people did not enjoy independence, equality of rights and duties, and thus social justice and territorial justice.

All this made all expectations of an independent, free, democratic, developing, prosperous country just dreams that soon faded into space. As in Kenya, due to Kenyan political problems, the same thing also happened in most of the countries that gained independence from European colonialism.

Kenya is no exception to the base of African political decline. Poverty, lack of social justice, and regional injustice, the growth of inertia and the attendant criminality, corruption and growth of gangs indicate that national development plans are in fact not addressing such Kenyan political problems or other political problems in other African countries. Development plans are often in favor of ruling parties and not for the benefits of their people.

During its first decade of independence, Kenya witnessed killings, rebellions, military coups, tribal violence and political corruption, with the rate of bribery rising year after year. Kenya also suffered from other Kenyan political problems, which culminated in the monopoly of power of the ruling party as the symbol of its struggle and the revolutionary values ​​it has represented since it succeeded in gaining independence for Kenya.

No one realized that this was a kind of dictatorship, or that the one-party dictatorship was perpetuated over the long term. Recently, however, issues have become apparent in the system of multiparty political parties, although the priority is always for the party, which can exercise its tactics to obtain a majority.

As a result of policy confusion, Kenya's political problems have worsened. Moreover, the failure of policies has led to increasing unemployment, poverty and family instability. All this has happened despite the development programs that have been working to make Kenya an economic and political force in the region, which is on the surface, while social and family instability indicates otherwise.

This means that development has not contributed to the resolution of all the political problems in Kenya, and that there are still challenges that will not be addressed until the establishment of the correct comprehensive constitution, which takes into account the foundations of the completion of what can be called a constitution.

Are you from the area? Do you know what is going on? Are you fluent in English and Arabic? Why not write your own page by your name in this network? You are needed! Fill the form here and provide details about you and a summary to current news or one new political topic analysis.

Share the Kenyan political problems with your friends, the social media, or any of your platforms on the net. Thanks.