The Sudanese Cultural Forums are simply forums for art, cultural and literary work wether it is in Arabic, or in English. This is the main page of the cultural forums of Sudan, which you can use to write your piece of artwork. You can also read some critiques, literary and cultural essays, poetry and short stories. 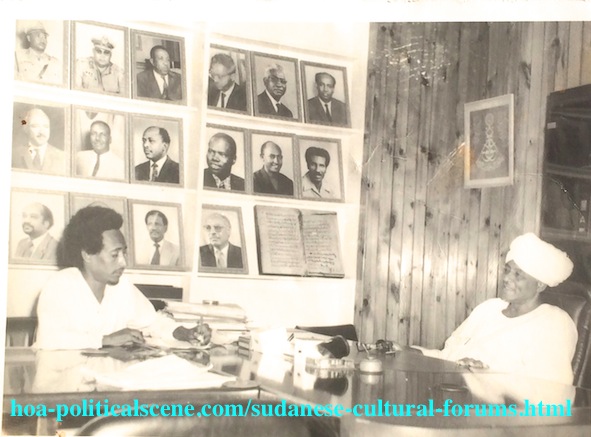 The page is also the site map 7 E in the Horn Africa's Network and it is one of the Sudanese site maps included below: 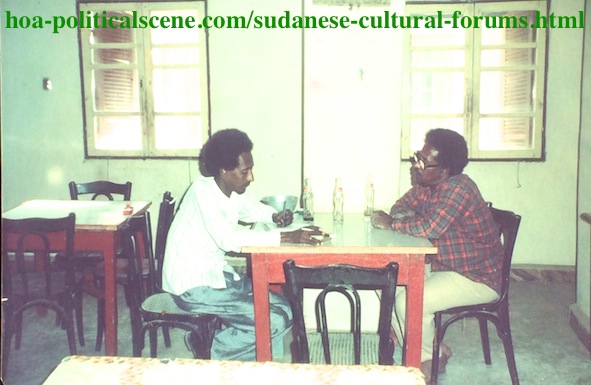 Entries in the Sudanese Cultural Forums:

As I mentioned the political articles of literary nature has important and interesting titles in the Sudanese Cultural Forums. This kind of articles are such as Caligula the Sudanese, in which I borrowed the title from the famous theatre play of Albert Camus, Caligula.

The second example of political articles of cultural nature in the Sudanese Cultural forums is, It is Time for Farces to Have Fun in Sudan, which is interesting to the point that the title was inspired by one of the poetry I read earlier during the 1970s.

The Good, the Bad and the Ugly in Sudan is the third example of political articles of literary nature. It is clear that I have borrowed this title from the famous Italian movie (Il buono, il brutto, il cattivo) produced in 1966 and starred by Clint Eastwood. For movies, see iWatchBesTV.com.

They Are Sinful Until the Messiah Comes Again! From the title, you could identify the cultural value, which is almost shared between many religions about the second rise of the Messiah.

But, such political article of literary nature, which is the fourth example, is not intended for religious purposes, as we always say religions are for God and politics is for the state and thus the state is a secular concept.

I have also borrowed the title from a famous movie by this title produced in 1969 and starred by Jane Fonda. The movie is based on a dance marathon, where participants compete for the money prize of the competition. Asking about the comparison? Read the articles.

Beliefs and customs combined are sometimes the main product of superstition. Surprisingly, the African superstitions rule even some leaders in this continent. They follow the occult of this superstition for the sake of keeping the political power for as long as they wish.

Her Lips Draw the Dream, this is one of the pomes I wrote in English. I wrote poetry actually using my mother language and rarely do I write poetry in English.

Sudanese Political Caricature, including the arts you see on this page are composed of some caricatures to demonstrate the tragedy between the economical deterioration at the personal level because of the economical policies of the regime in Sudan and the contemporary secession of the South Sudan with almost all of its petroleum.

The Sudanese Song Poetry is so rich by its literary, cultural and customary themes that you couldn't explore unless you know the Sudanese dialect within the Arabic language.

And even you know the dialect, this kind of poetry remains in its uniqueness difficult to explore. However, Sudanese could easily whether this or that kind of the Sudanese poetry is national (political), or social (love). This is one of the directions the Sudanese Cultural Forums tends to go to explore.

What Readers Like to Read? Literary, they want and like to read what interests them and solve their problems, or fulfill their desires to acquire something they lack.

Alternatively, they like to read what makes them feel great and grateful to strengthen their knowledge. There are many articles that fulfill their longing for clear understanding to the political problems in Sudan. However, you could either write what you would like to read, or write about your knowledge in the Sudanese Cultural Forums.

Psychology of Fear has Political Aims! It certainly has political goals planed by the Sudanese dictatorial regimes and the Sudanese sectarian parties to silence and muzzle the people of Sudan and make the Sudanese opposition lose the ability to move against their dictators, whether they are military rulers, or civil sectarian leaders.

Well, you could use the form in the Sudanese Cultural Forums to write cultural articles about the mentioned psychology of fear in Sudan.

Psychology of Fear Will Turn into Uprising in Sudan! Never stopping at the point mentioned above, the psychology of fear in Sudan should not work on the Sudanese people. They should continue to use their creativity to create new methods to move forward.

They should do this to topple those dictators and close the way for the sectarian leaders to come back to do what they used to do to "donkeynize" the people.

This a new term I created to describe the political absenteeism made by all of those military dictators and sectarian sheikhs in Sudan's history.

Why Political Refugees Tell Lies? Psychologically, they do that to get refuge in the West. Many of them have arrived already there and started to tell more lies about what they did to oppose their governments.

They even claim professional experiences that they have gained, something many of them never achieved. However, even those who have achieved that continue to lie in their CVs about when they have become experts in their jobs and when they have really started their jobs in the professions they have specified. 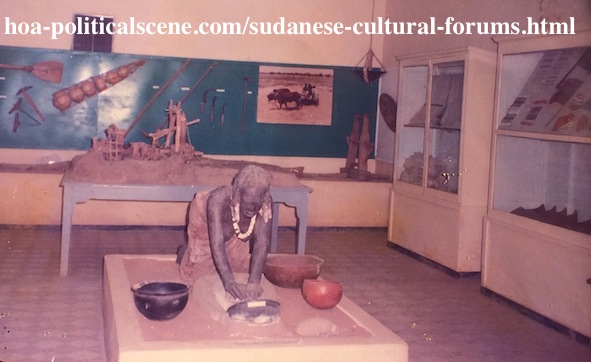 The Sudanese Cultural Forums in Arabic! 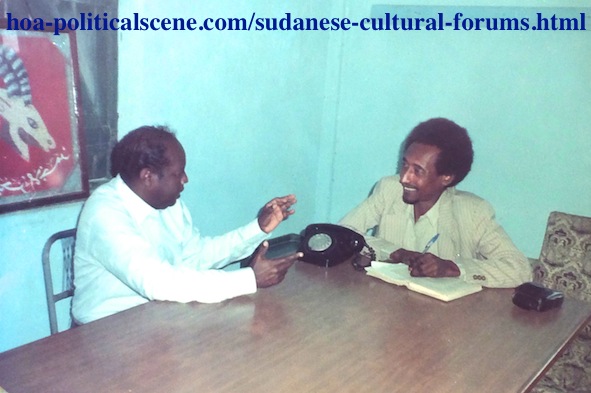 Sarcasm is clear and obvious in this cultural article in Arabic, which talks about the huge number of journalists who have become political analysts of the political and cultural situations in the Horn of Africa and East Africa by hook or crook.

Critique with deep analyses is just like making love with your passion. Just understand it that way as exact science of indulgence in writing and don't go so far beyond it. 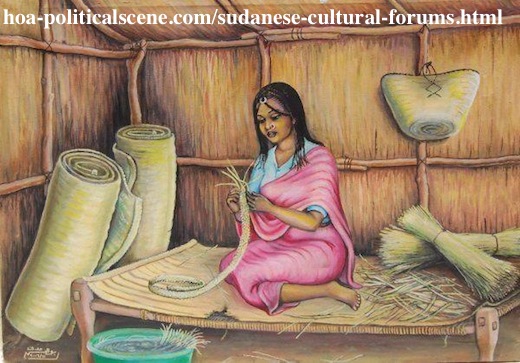 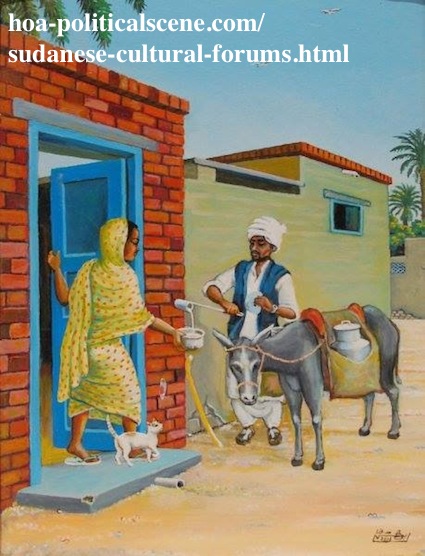 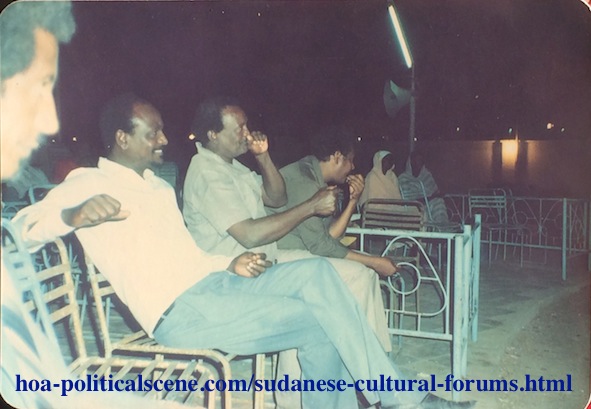 Literary Works in Arabic in the Sudanese Cultural Forums:

HOA's Arabic Prose is a bilingual page along with the Arabic HOA Political Scene in the Horn of Africa's Network. Although the page has general literary items from or about the Horn of Africa, but it may include Sudanese prose, as well and so belong to the Sudanese Cultural Forums to support cultural topics of prose nature.

Please, use the form to contribute and get some useful gifts to read and learn from them how to write well. In addition, I am longing for you generosity. Use the small buttons to share the Sudanese Cultural Forums with your social media and other services. Many thanks.

Khartoum State Government Demolished Soba Church and Arrested Two Pastors Not rated yet
The Khartoum State government carried out its ongoing campaign against the Sudanese Christians, which has been a major practice since the separation of …