Why We Need Mass Systems?

Global crises require MASS SYSTEMS. The crises are overwhelming and extending internationally, since the end of the Cold War and many of them have happened because of climate change, along with its emission of carbon dioxide and epidemics, bacterial, chemical, nuclear weapons and hazardous waste. These crises are produced by the ruling elites of classic political parties. 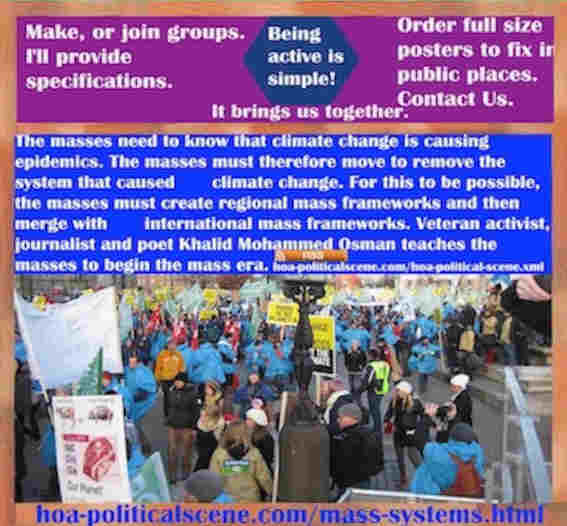 hoa-politicalscene.com/mass-systems.html - The Strategies and Tactics of Mass Systems: The masses need to know that climate change is causing epidemics. The masses must therefore move to remove the system that caused climate change. For this to be possible, the masses must create regional mass frameworks and then merge with international mass frameworks. Veteran activist, journalist and poet Khalid Mohammed Osman teaches the masses to begin the mass era.

The urgent need for the Systems of the Mass all over the world, or the necessities of the systems of the masses are required in this recent era, because of solid facts indicating the deterioration of our world since the end of the Cold War. If you can't spot any deterioration, that is your problem and you should fix it by learning here.

What has Happened Following the End of the Cold War?

Do you want more to realize the dangers you are living every day? 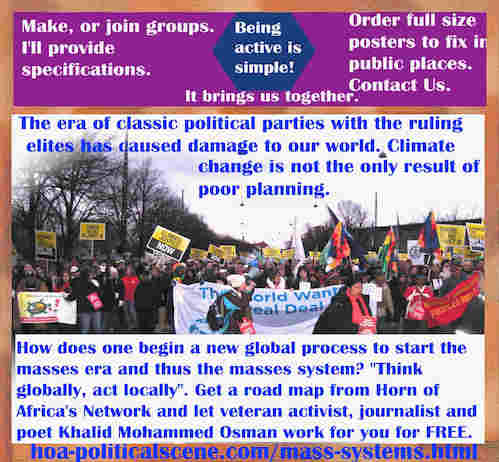 hoa-politicalscene.com/mass-systems.html - The Strategies and Tactics of Mass Systems: The era of classic political parties with the ruling elites has caused damage to our world. Climate change is not the only result of poor planning. How does one begin a new global process to start the masses era and thus the masses system? "Think globally, act locally". Get a road map from Horn of Africa's Network and let veteran activist, journalist and poet Khalid Mohammed Osman work for you for FREE.

These Facts above are the Indications of the Necessities of Mass Era!

Well, the headline as it is known is always above, or at the top of the article. Mine is at the end of the article above. You gotta laugh, friend. Continue your discovery ... 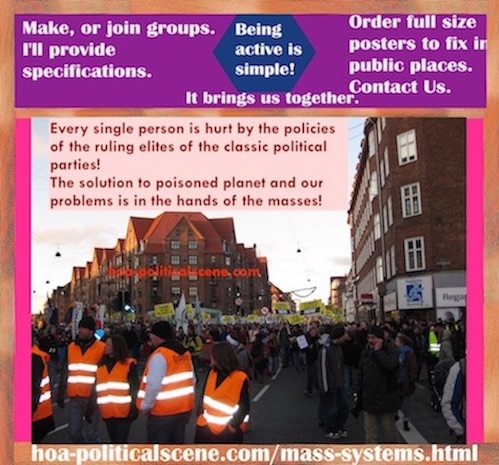 hoa-politicalscene.com/mass-systems.html - The Strategies and Tactics of Mass Systems: Every single person is hurt by the policies of the ruling elites of the classic political parties! The solution to poisoned planet and our problems is in the hands of the masses! Take the lessons from veteran activist, journalist and poet Khalid Mohammed Osman at the Horn of Africa's Network.

The Indicated Dangers are Done By the Classic Systems!

The signs of dangers are not limited in their indication to the impacts of liberal politics on the world. The fact is that the term "liberal" isn't liberal at all, as it serves classic systems with their affiliation with multi-billion-dollar companies, which indicates the common interests between them. The global empire of the dollar is the one that makes governments, but not the surfaced elections.

If you used your mind correctly, you will realize the need of the mass systems.

The governments in most of the world after the Cold War are capital governments. Don't be fooled by some socialist parties here and there. Socialism is destructed by the destruction of the Soviet Union and the Eastern Block. Those socialist parties are just clichés of parties that serve their own interests.

All of this indicates the necessities to end political parties and start something else in place to get to elections and build a new ruling system.

In fact many forms of democracies we have around the world are clichés of democracy, as they are serving the interests of ruling elites of classic political parties, but not the interests of the masses. This requires from the masses to follow the LPE of the masses' era to build MASS SYSTEMS everywhere, sustain climate, nature and health, solve economical and human crises and make every place in the world a better place.

Can you do that?

You can. Never think that you are a weak individual.

They also follow here below and on the linked pages: 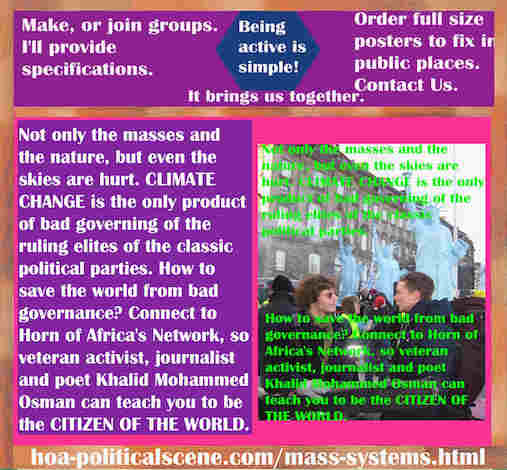 hoa-politicalscene.com/mass-systems.html - The Strategies and Tactics of Mass Systems: Not only the masses and the nature, but even the skies are hurt. CLIMATE CHANGE is the only product of bad governing of the ruling elites of the classic political parties. How to save the world from bad governance? Connect to Horn of Africa's Network, so veteran activist, journalist and poet Khalid Mohammed Osman can teach you to be the CITIZEN OF THE WORLD.

The Dynamic Ideas of the Eritrean Martyr's Tree, Planned by Me and Implemented by the Masses ... 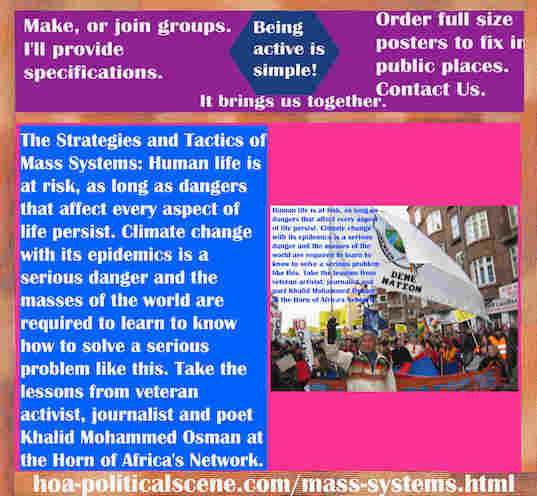 hoa-politicalscene.com/mass-systems.html - The Strategies and Tactics of Mass Systems: Human life is at risk, as long as dangers that affect every aspect of life persist. Climate change with its epidemics is a serious danger and the masses of the world are required to learn to know how to solve a serious problem like this. Take the lessons from veteran activist, journalist and poet Khalid Mohammed Osman at the Horn of Africa's Network.

The Dynamic Ideas of the Sudanese Martyr's Tree Planned by Me and Failed by the Masses ... 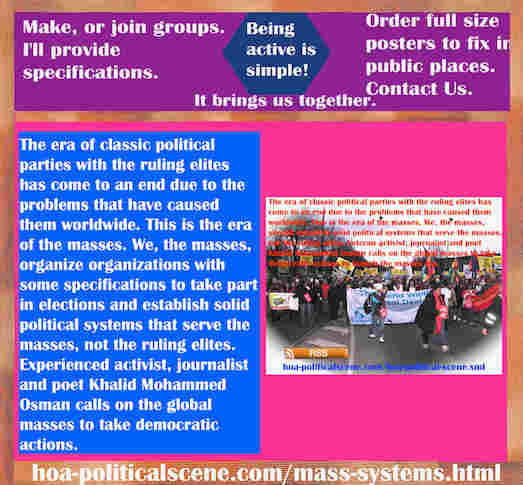 hoa-politicalscene.com/mass-systems.html - The Strategies and Tactics of Mass Systems: The era of classic political parties with the ruling elites has come to an end due to the problems that have caused them worldwide. This is the era of the masses. We, the masses, organize organizations with some specifications to take part in elections and establish solid political systems that serve the masses, not the ruling elites. Experienced activist, journalist and poet Khalid Mohammed Osman calls on the global masses to take democratic actions.

The Dynamic Ideas of the 3 Mechanisms of the Sudanese Revolution, Failed also by the Masses ... Sudanese Never Learn form Mistakes 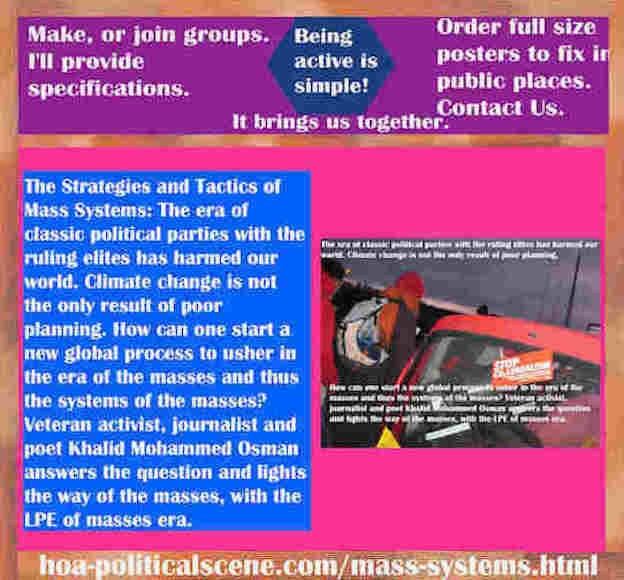 hoa-politicalscene.com/mass-systems.html - The Strategies and Tactics of Mass Systems: The era of classic political parties with the ruling elites has harmed our world. Climate change is not the only result of poor planning. How can one start a new global process to usher in the era of the masses and thus the systems of the masses? Veteran activist, journalist and poet Khalid Mohammed Osman answers the question and lights the way of the masses, with the LPE of masses era.

The Failure of the Sudanese Revolution Due to Ignorance & Other Conspiracies ...

The Conspiracies of the Muslim Brothers against the Sudanese Revolution ...

The Mass Systems in Other Languages!

The connotation of the Greek description is: The masses need to be aware that climate change is causing pandemics. You need to read to understand and change the world.

The explanation of this Greek description is: How will the age of the masses make the victory of the masses so that they can replace the classic systems of the classical political parties with the mass system?

The interpretation of this Greek description is: A word of wisdom for solving whole world problems is with a term that says that the healthy body is in the healthy mind.

The interpretation of the Greek description is: The masses must take power and change political systems everywhere to achieve a positive climate maintenance and be safe from pandemics. To lead the mass era, or just be a part of it, you have to organize with local bodies and connect with international bodies. Bla bla bla systems do not care about your planet more than their interests. You the masses are the change.

Be Active & Support the Mass System!

Documentary films on MASS SYSTEMS might provide with good history on the movement of the masses at TVCinemaApp.com. See also what Climate Change has done to beautiful places at 100-beautiful-sites-in-the-world.com.