Exploring the Democratic Republic of the Congo Politically! 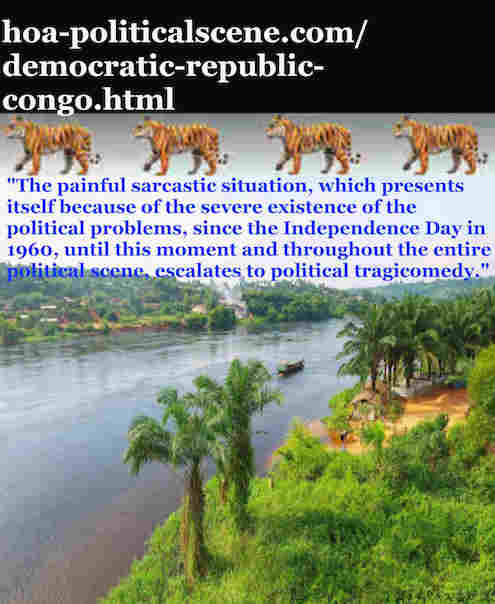 The Democratic Republic of the Congo has political stories that have not been written and thus read, Yet! Here they are in the Congo's section of the HOA Political Scene Blog.

This vast state of the Congo DRC cuts the way to democracy, justice and unity with one leg. The political and territorial problems are building up of constitutional defects. That's combined is the second leg, the politicians have amputated continuously, since the independence.

The Congolese political tragicomedy is somehow as the same as political tragicomedies that are still present in so many African countries, since the day they gained independence. This could be the right indication and also the right conclusion that the national leaders have failed after hard periods of liberation struggle to build and run their independent states properly. 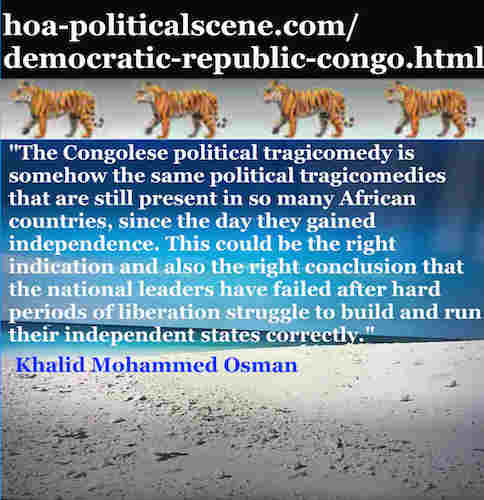 Skeptical performance of politics in the Democratic Republic of the Congo (DRC) has from decade to decade, since the independence presented the existence of different views of how to gain and remain in political powerful the leading political parties and how to preserve the political charisma of the Congolese leading figures.

That narrow political thinking had performed well to contribute to the political deterioration since that time, by ignoring the regional territorial demands for the right equality and the right integration to make the state well united and strong. It has always been the core of missing the right point of how to rule a big land with all the big differences it has in all of its territories.

In addition, many leaders has also and until this moment regional territorial differences through which they see that, the regions they represent should have the political power, meaning to dominate other regions and that is not for the sake of the regions, but is only for the sake of the leaders to control the vast land of the Democratic Republic of the Congo (DRC).

In such cases, where national conscience is absent, and only personal selfishness persists, the catastrophe is inevitable.

This is in fact what the Democratic Republic of the Congo (DRC) is living every day, despite all of the process of settling political and regional territorial differences that are presented in the last constitution, which was approved in a referendum, and promulgated on February 18, 2006 by President Joseph Kabila.

In fact, that constitution, which is the sixth constitution since the independence in 1960 has also not big differences from the other constitutions, as it also ignores vital settlement factors focusing on legal framework and concentrates on the leadership.

Well, it is all about constitutionalising the state properly, everywhere and not only the Democratic Republic of the Congo.

In the Congolese section, you'll get the right reading of the consitutions in the DRC. You'll see how every constitution written after the first constitution as been done only by adding or replacing phrases from other constitutions. 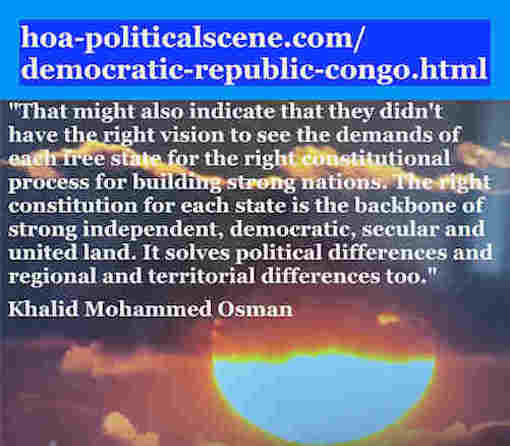 Constitutional Defects in the Democratic Republic of Congo!

This section of the page will be filled in SOON.

Your Political Opinions on the Democratic Republic of the Congo Count!

I'll be glad to have you as a friend. There are many sharing buttons on the page. Best, yet is to get the page on your favorites, so you can read many new articles.

In addition, you might also be interested to read more different topics about the Democratic Republic of the Congo such as the Congo River Basin at 100-beautiful-sites-in-the-world.com.

Comment C2 Entries on the Democratic Republic of the Congo appear at the section of the page above this paragraph and below the comments form.