Mental dynamics evoke HOA's Common Purpose. They evoke in a special way the world's minds to adopt a correct and future positive thinking style in all the problems that have afflicted the world since the end of the Cold War era. This is because, decade after decade, these problems have been evolving, piling up and threatening all of our lives. 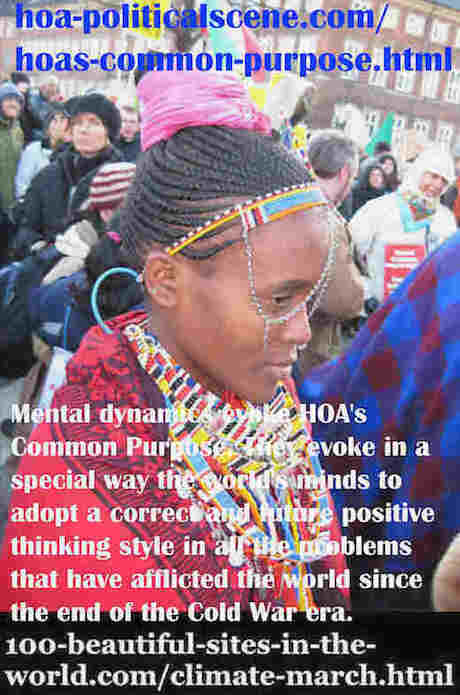 hoa-politicalscene.com/hoas-common-purpose.html - HOA's Common Purpose: is to enlighten minds to adopt a correct and future positive thinking style in all the problems afflicting the world since the end of the Cold War era.

In their current circumstances, they have reached the following:

The strange thing about this for many is that the capitalist powers that created international terrorism with the help of the two aforementioned countries are now using these same Arab and Islamic countries for the war on that terror in Yemen!

Isn't that one of the things that make many people crazy?

Does this not prove that the presidents of these alleged Arab and Islamic countries are merely puppets driven by the strong international capital?

* Is it not time for the peoples of these aforementioned countries to be liberated?

These political matters, which are considered strange, are not strange to those who have a sane mind.

Those who do not say that the Cold War era was an era does not know the historical facts, or do not understand them.

HOA's Common Purpose is the Global Dynamics of the Revolution!

Does HOA's Common Purpose Make Any Sense to You?

* Use the form below to write comments on HOA's Common Purpose. Enter your mail on the secure server and check the box to receive notifications. Visit your page, when published and share it on good media. Use the form on Forward HOA Political Scene, or use any methods you know to forward your page to all people you know and request them to read your page and do what you did. Thanks.