Getting Your Environment Protected is Easy!

I love the Eritrean environment and the Eritrean people. I had been sacrificing my personal life for those people I love. 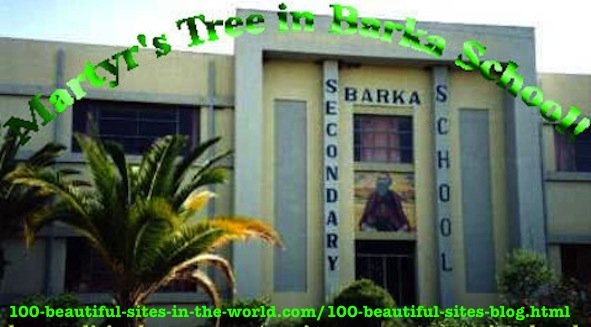 hoa-politicalscene.com/environment.html - Milieu: The Martyr’s Tree in Barka Secondary School in Asmara. Khalid Osman has engaged all the schools in Asmara in his environs project.

That was very useful to help me carry out my project until I built it the national Eritrean environs organization. Many of the high ruling staffs know this fact.

For example, Alamin Mohammed Seid, the General Secretary of the People's Front for Democracy and Justice (PFDJ) in Eritrea said to me many times when we had hot Eritrean coffee, "I know Khalid; you will not get back to the Gulf area to make money. You have been there once and that ends. You love being with us, I know."

He said that many times, as I have mentioned, when my brothers in the Gulf areas sent me so many messages through the faxes in the ruling party's central office, willing to prepare a visa for me to return to the Gulf area.

I thank him very much for his words. I wish him from here good health as I heard that he is ill somewhere and I could not of course reach him. Be health and happiness filled my friend, Alamin Mohammed Seid. 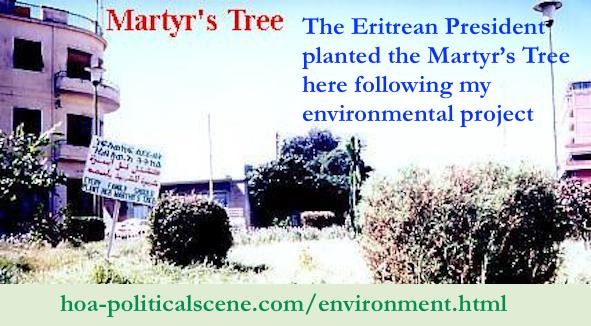 hoa-politicalscene.com/environment.html - Environment: A Martyr's Tree planted by the Eritrean President in action 2 of my environmental project, before the launch of the environment organization.

This is one of the Martyr's Trees planted by the Eritrean President in action 2 of my project. The milieu protection was carried through different plans I prepared to implement planting trees in different occasions.

The milieu has a special habitats in the surroundings and the climate that time was almost European climate before the tragic ﻿climate change﻿. See 100 Beautiful Sites in the World.

You can catch the mist while slowing down across the streets that time. The flowers and other plants hang out of walls throwing leaves, or petals on the streets.

Outside this view and on the routes between towns, the milieu was degraded, during the libration war and there were ton of broken military vehicles, destroyed artery and other military stuff and probably affects of chemicals.

As a journalist, I knew already that the Eritrean people had lost about half a million humans in the liberation war. The surroundings of the beautiful capital city of Asmara and many other localities have been also degraded badly and there were chemicals, weapons and human remains all over the country.

That was a light to create the idea of the "Martyrs' Tree". This was energetic idea, because almost every family in Eritrea has a martyr in the liberation war.

Beside the idea of the martyrs tree, many ideas to plant trees for every born, for example was also good and it has strong effects on the milieu.

Trees for every family or national occasion's and by the name of the occasions was also involved the mass to get the life into the soil again.

As a journalist who has his own motivation for reasons, orientation and bias, I organized an offline group network that involved some trade unions, associations and the whole community to participate in environmental activities I ran in Eritrea.

When any annual anniversary approaches, I would contact the leaders of the unions, associations and schools to implement the comprehensive project I made for such anniversary.

I did that many times, accompanied by mass media coverage and I gained more reputation and then had more friendship ties with many leaders.

For example, many times, as I was trusted, leaders offered me the money needed to carry the projects. Instead of taking the money, I advised them to let the accountant of the trade union accompany me while investing that money on the necessary equipments and materials for the environment and to have the invoices needed for accounting purposes.

I carried those activities successfully and developed them to organize the Eritrean National Environment Organization. I simply suggested to the leaders of the trade unions to supply me by two members from each union to be coordinators in the milieu organization.

Greetings to those active key figures: Roma Gebr-Eusus in the Eritrean Confederation of Workers, Amna Nur Hussein in the Social Welfare, Eskalo Mangarious, the ex-Eritrean Women Union leader, Sabhat Efrem the ex-governor of Hamasien Region, and uncle Dabasai, the head of the public service in Asmara municipality, and more greetings to all the Eritrean people.

I walked on my foot down the valleys and up the heights, tore many "sheda", the liberation fighter's sandal, to almost all the schools to get them involved in the milieu activities.

The idea I used the media and discussed with different schools' directors, organized the students and invited every association and union to implement, cleaned the milieu, covered the country by more than 5 million trees, and built it its own National Environment Organization.

I am so satisfied and grateful! Yes, I should repeat this many times. I love Eritrea! I did this for love. I didn't expect anyone to reward me for the time and the efforts.

History will write this, as top achievement of a Sudanese who really loved Eritrea and supported its struggle since the late seventies, at the time that many nationals disliked the revolution leaders in the Eritrean People's Liberation Front (EPLF).

... and even walk with us through these dynamics...

Read other projects, I am carrying now! Share, be active and support them. Here are those vital projects at:

Use the following form to comment on the Environment page, or to write about the environment in Eritrea.

The "Solo Build It" Tools at the bottom of this page empower the Environment page! They empower actually the entire HOA Political Scene website. I love them because they make all website building and relevant technologies snap.