If Indians read the title, "Sudanese Agitation", they will directly understand that it is a public Sudanese demonstration. So, far, I'll be an Indian... and you should too, in this regard 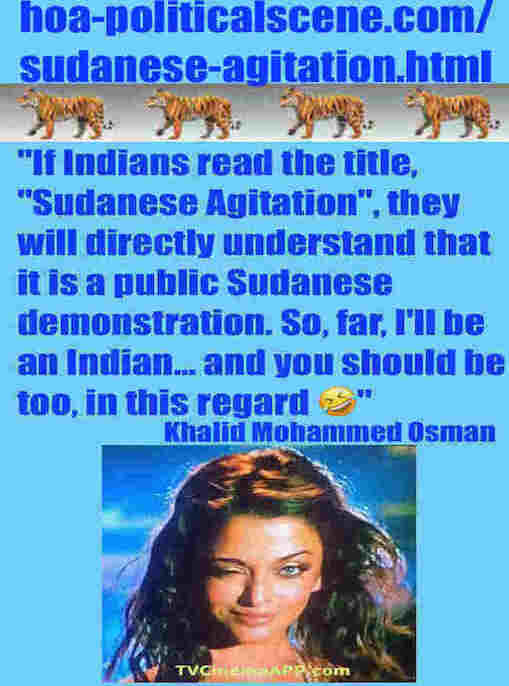 There are two versions of the following article, One of them is in English here and the other is in Arabic at Sudanese Political Agitation.

But, seriously, jumping over the spirit of humor in the FIRST phrase, the term "agitation" is so applicable in all of its meanings, expressions, and synonyms, when used to describe a Sudanese case. It is so relevant, consistent and accurate in description to the Sudanese situation of the current revolution.

Understanding the Term in the Sudanese "Agitation"!

You have good political insights on Sudanese Agitation. The article is so long and it has so many titles in so many episodes in a Sudanese sequence of political articles.

The sequence started with episode 1 and it has more than 200 episodes. Many of the episodes are in the index below, but episode 14 is missing. It is at Sudanese Affliction., with its Arabic version at Sudanese Political Affliction.

The Sudanese Agitation is episode 16. So, it is better to get through the following introduction to know more about these special series of articles and then get to the main content of the SUDANESE AGITATION. 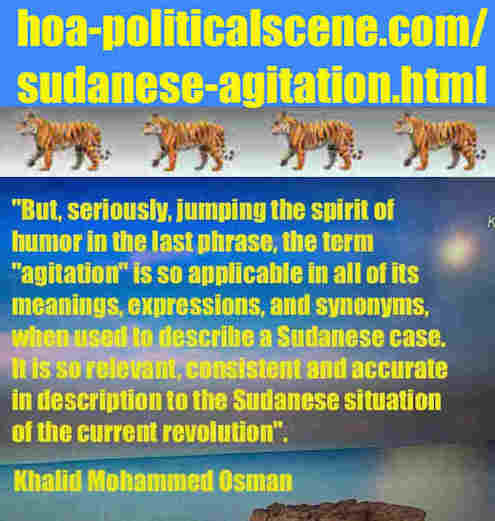 The Revolution has Requirements that Must have Been Done!

The Sudanese Agitation discloses the necessities to understand who's who, what's what and which's which.

That means to understand the whole political development in Sudan, since the day of independence, including of course a comprehensive understanding of the political powers that have all led Sudan to this tribble failure.

The Sudanese agitation focuses on the public rising in Sudan and on a continuous people's movement done by the Sudanese revolutionary youth to bring down the totalitarian regime. It is very important to know the requirements of a successful uprising.

There is a continuous talk in this regard that can be reached through the provided pages and through the following educational political message, which includes what we need to understand.

We need to understand in order to think about achieving a successful comprehensive revolution that ensures the accuracy of its performance, the success of its tasks in the transitional period, and the methods of the transitional ruling power that has a well-done secular program, with the presence of genuine Sudanese tigers to protect the gains of the revolution.

It is for this reason, I said long time ago, before moving into any demonstrations, we should be prepared by having our mandate for our policies, cabinet and revolutionary forces, such as Annumor AlSudanyah - Sudanese Tigers to protect the gains of the revolution and to place the revolutionary cabinet in power. 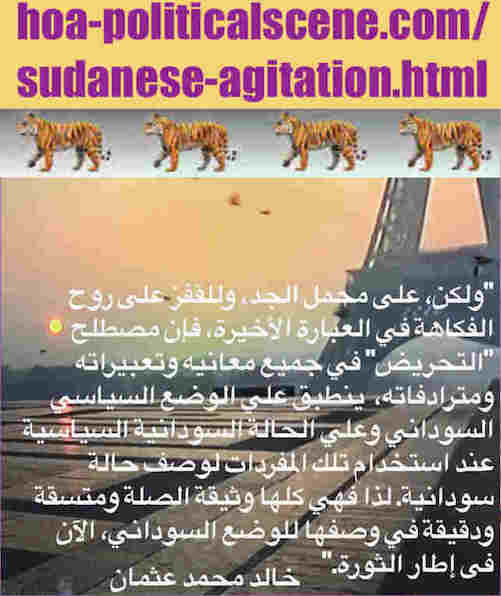 The Sudanese agitation to arouse the public political concern about such issue and press for right revolutionary actions, or by other meanings, the political campaigning of Sudan, as to the Sudanese political crusading, and the state of political fighting and heating of Sudanese, all of that will never achieve a successful revolution.

It won't, if we don't have a comprehensive knowledge of what has happened to Sudan, since the independence, and if we don't listen to how to achieve the right successful revolution.

When we first understand the complete reasons of failure since the independence, we shall know with whom we work, and whom we should avoid and never listen to them.

That means to know the enemies of Sudan from within the leading powers that led Sudan to such continuous tribble failure.

The reasons of course are not hidden from the Sudanese people, but they may be absent from the rest of the people in the world, except from the neighboring people, who know what is happening in Sudan, and what are the causes of the Sudanese agitation, crusading, stirring emotions, fighting and heating on the Sudanese public street.

The causes, or the reasons are not only that we have a comprehensive religious military regime that persecutes the Sudanese people, violates human rights in Sudan, commits massacres and crimes against humanity in Darfur and other regions of the Sudan for a period of 30 years.

They are not only that, throughout this period, the regime looted the wealth of Sudan and deposited it in the accounts of foreign banks abroad, sold Sudan's investment lands and projects to the opportunists in the Arab countries, Turkey and others.

They are also not only that the regime exports terrorism to neighboring countries and works within the framework of al-Qaeda terrorist organization, especially as one of the elements that formed al-Qaeda through the Hajj conferences in Jeddah.

In light of this, it was necessary for the Sudanese masses to know all of the hidden policies that led Sudan to failure, since the independence.

By that they will understand whom to hold responsible of the deterioration of Sudan, since the independence. They will undesnartd that they should never tolerate with those bad criminal Sudanese guys.

If the previous revolutions have failed, the current Sudanese revolution is the strongest and where the Sudanese people prove their good positions and willingness to remove this totalitarian regime and liquidate all traces left behind by the Muslim Brotherhood in Sudan, to clean the country from their mess.

All of this political story has backgrounds to be familiar with. The story includes the causes of the deterioration and all of those leading powers you should be aware of. 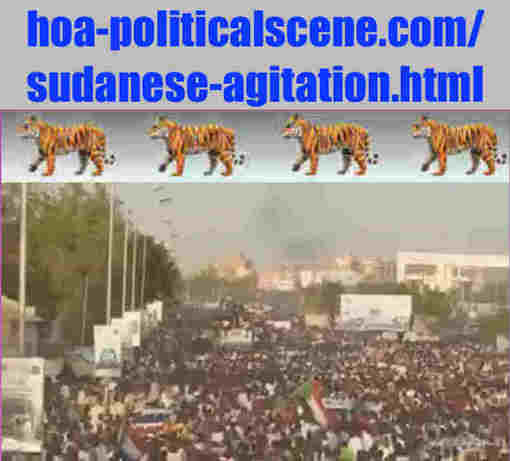 I mentioned one of the reasons that this party finds support from the Sudanese sectarian parties because they are based on the same religion base used by this Brotherhood party in politics and in the state.

These sectarian parties in turn, find that the Muslim Brothers are supporters, and therefore, their presence in the Sudanese political scene is necessary to help them control Sudan's political scene and keep control of their interests in Sudan.

Continue SUDANESE AGITATION at Sudanese Agreements, which is episode 17.

Did You Find Sudanese Agitation Useful?

Have you learned something useful form Sudanese Agitation?

Write comments on SUDANESE AGITATION in the following form.

In addition you can watch the SUDANESE AGITATION on documentary film at TVCinemaApp.com.

Comment C2 Entries on SUDANESE AGITATION, appear on the second section of the page above this paragraph and below the comments form.