Do You Believe in Superstitions?

The Horn of Africa is full of Superstitions, although they spread from Nigeria across Sudan to India! They even nest in the political systems.

Even though Africa is the source of fallacies, they are also in some other places in the world. It was considered many years ago that it belongs to the underdeveloped world. However, it is now in every place to the level that they have become themes of movies, as shown on TV Cinema App.

Few intellectual people don't believe in such a thing, as they don't believe in any myth of politics, although they see every time and then and in many decades, these terms of illusion have been and they are always used by the ruling elites to dominate for as long as they could. But, generally, the people are so obedient to the devil. 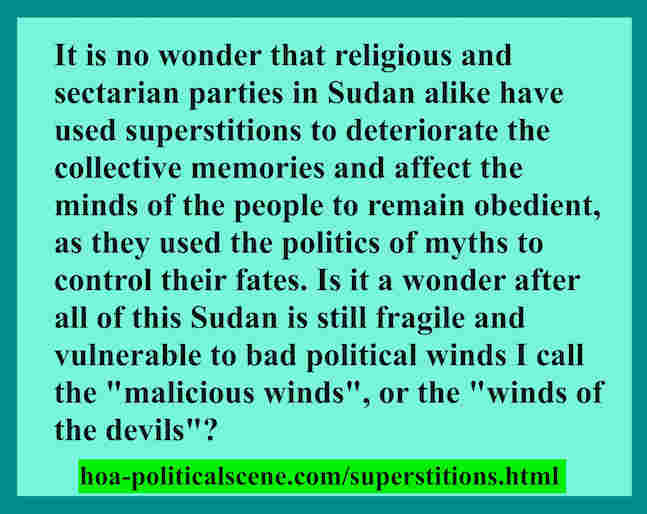 hoa-politicalscene.com/superstitions.html - Superstitions: are practiced in Sudan by religious, sectarian parties and military dictatorship alike since the independence. A political quote by journalist Khalid Mohammed Osman explains.

They play the main role in the spread of this sort of credulity, although they have it too. This happens because the ruling elites believe that the Sudanese people are superstitious and vulnerable to fallacy! Unfortunately, revolutionary ruling elites in the area believe also their people to be superstitious!

However, the ruling elites here and there have not any imagination as we know, because only the people with imagination are capable to dream and manage their dreams and make them come true by their inspirational visionary intelligence.

Walt Disney has built a wonderful world only from his imagination. Therefore, he remains a symbol of the inspirational visionary intelligence.

In spite of the fact that our societies are full of superstitions, but the people become wise day after day to throw the influence of superstitions to the sea, I reckon.

Why they throw it to the sea, you may ask...

I would certainly like to hear you laughing, fellow, from the depth a (clever laughter) that breathes all your pain away, and throw it not to the sea, but to the river, as the river is a symbol in our real lives and our dreams.

If you heard that Indian song that goes: "The Great King is my mother; the Himalaya is my father", you will get this vision. However, the king the song meant is the Ganges River or the Ganges Delta or Ganga River, where merchants cross from Allahabad selling amulets.

Is Sudan the transit port of superstitions?

Regardless to these two questions, and to continue the superstition, people throw to the sea, may be that to entice Nereus to send them his Nereids one by one to enrich their lives on the Earth.

Was this another laughter?

However, when you throw any superstition, you feel to the river; of course, this is only superstition you are throwing to the Nile not your daughter; you will clean it by the fresh water to reach the sea pure, and so it can work well on Nereus's daughters.

Was this a third laughter?

If we watched one of the Zars ceremonies, then we would probably come out with the impression that the supernatural power which are Genies or Spirits in this situation makes many people in the circle absorbed by the flame of the hidden power.

The prospect should order and the hearers should obey. She would actually order what the unseen "ASYAD" told her to order. The "ASYAD", which is interpreted to MASTERS could be in other names in other origins of superstition. The obsession works through weak imagination to make the prospect absorbed in that mode.

Some sick people use these ceremonies for pleasure with other women. During the flame and the absorption of all of the people present, anyone can do anything... even sex.

The demon is now well known and is presented in many the new movies in the International cinema. But, it was know previously in the underdeveloped world as genista, goblin and orcs.

From Egypt, Ethiopia, Nigeria and Sudan many beliefs about these creatures spread all over the area. In Sudan especially the beliefs are combined with so many including even well educated people. So, the Sudanese have women and even sheikhs who work to expel those orcs out of the body. While the sheikhs do spiritual religious rituals, the women do a different ritual called EL Zar, or just Zar.

Religious Superstitions Too, but also Political!

In another different situation, tombs as notion of false beliefs used to be signs for some followers who are even very poor people to donate money for the dead. This is a religious superstition. They make people fearful, weak and very obedient to their masters. If those masters become leaders in ruling elites, that fear will follow to tie the people to exploit them by this servitude.

In reality and dreams, false beliefs always make people either fearful or unsure. As people always search for guidance through some beliefs or great power, the supernatural power makes them weak in its presence.

It is likely that the ruling elites know this fact and therefore they use this medium to increase the fear of the people from one side and to make them belief on them as shadows of this supernatural power on the Earth.

The sheikhs of traditional parties believes that they are the shadow of God on the Earth! So, they use the superstition to serve their interests.

I hope this superstition was interesting. I only meant it as a food for the journey. I hope it will be a long journey, with love, health and prosperity to you and yours from the deepest of my heart.

¤ Nereus was the God of the sea. In the Greek mythology, he was the eldest son of Pontus / the Sea and Gaia / the Erath. I hope you will understand the ties in the articles between the earth and the sea. However, we need the river to reach the sea! For more information about the Greek myth, see the Aegean Greek Islands at 100-beautiful-sites-in-the-world.com

¤ Nereids were the daughters of the God of the Sea.

¤ All this may refer by a way or another to the rich life and integrity of cultures the Greek community had in Sudan once. I love them and call them to come back. Opening the borders is the only way to maintain global vision, in this time of hardliners' rule in Sudan. We had beautiful life then. See Remember the Greek of Sudan and the Greek Communists Support Sudanese.

Fill it in through the following comments form. Thank you very much.

Will you share SUPERSTITIONS with your services through the buttons below, or at the top of the page? I'll be grateful.

I use Site Build It below to empower "Superstitions" and the entire HOA's Network.