We have three questions here on HOA's Common Goal to answer: 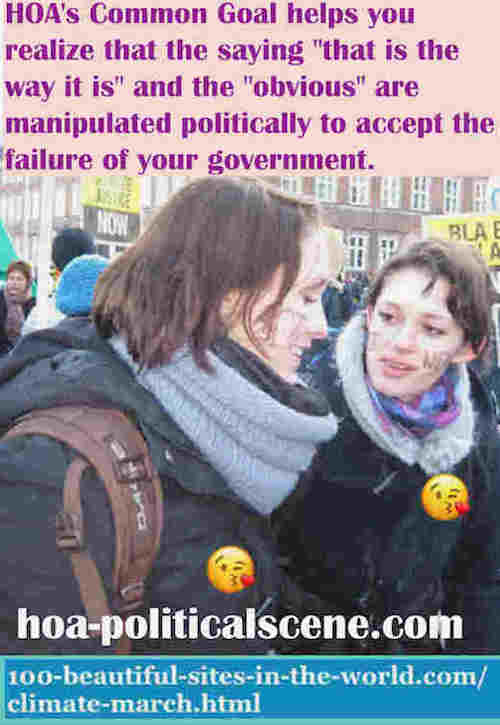 hoa-politicalscene.com/hoas-common-goal.html - HOA's Common Goal: helps you realize that "that is the way it is", or the "obvious" are manipulated by your governments to accept their disasters.

Well, the third question goes first here to cover and after that the answers of the first two questions will follow through the sections of HOA's Common Goal.

If you didn't recognize, or see any disaster in your life, and yes your global life, then you might have already been blinded by the saying "that is the way it is", or the "obvious" which are two concepts I consider are plotted by the political systems everywhere to make you accept such dangers that threat your life, such as climate change and the death tool called Coronavirus epidemic (COVID-19).

I consider climate change and consequently its result coronavirus are conspiracies, whether they were planned or not, have happened as governments pretend to declare by natural causes, which are other causes than political causes. 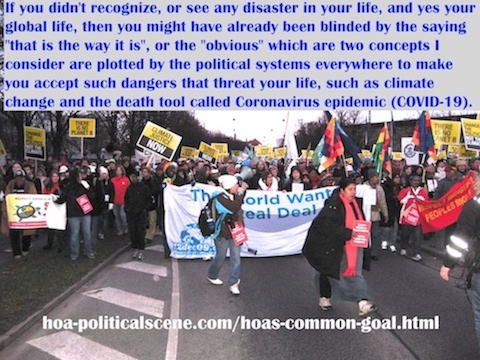 hoa-politicalscene.com/hoas-common-goal.html - HOA's Common Goal: If you didn't know of any disaster in your life, then you might have already been blinded by the saying "that is the way it is", or the "obvious" which are two concepts I consider are plotted by the political systems everywhere to make you accept such dangers that threat your life, such as climate change and the death tool called Coronavirus epidemic (COVID-19).

The causes are both economical and political in my perception, while observing the changes that have been happening since the era of the Cold War. From such observation, I don't anticipate, but I am sure that every change that has happened globally has created a variety of economical, environmental, human and thus social and political disasters.

We have the tendency to accept the "obvious" and "that is the way it is" although the obvious in this age has been manipulated  by a certain policy. That certain policy has been planned during the era of the Cold War.

The economical and environmental disasters have happened following that era, which indicates and prove that that certain policy has been planned to end or by other words destruct the balance of the global political system, which has been composed of two powers, the capital power and communist power that have great influence on the other world. 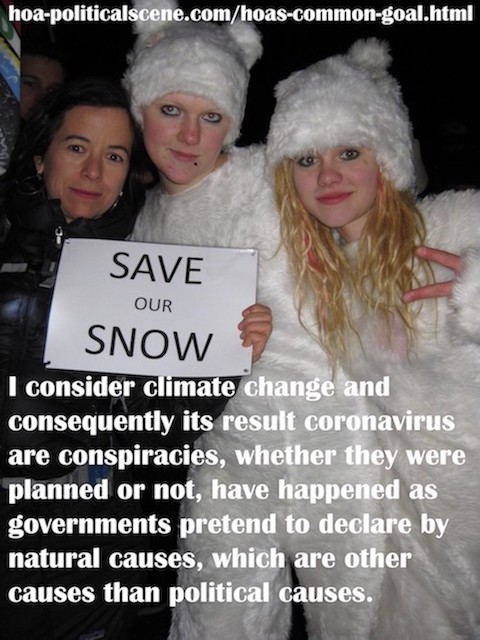 hoa-politicalscene.com/hoas-common-goal.html - HOA's Common Goal: I consider climate change and consequently its result coronavirus are conspiracies, whether they were planned or not, have happened as governments pretend to declare by natural causes, which are other causes than political causes.

The certain policy I call had only one goal and that goal was working to empower the capital power to rule the world alone without having any competence from any other political power, being that a communist power, or what's called in another formula the socialist power, where socialism is in fact not socialism, at all, but a grey political color that defines nothing more than a backward power.

That certain policy continued after ending the era of the Cold War and creating the era of what's called the new world order to serve that certain power, an estimation which is a prove to the first plan, which was the collapse of the USSR and damaging the balance of the global political system.

It followed in the era of the new world order to enhance the military industries and increase other heavy industries for the capital power to grow more stronger. Such industries including bacterial, chemical, microbial and nuclear weaponry and heavy industries producing hazardous waste and heavy emission of CO2 completed the destruction of the balance of the ecosystem.

All of that create the global disaster we are facing right now. Forget about the human victims and national victims produced by that certain policy, during the destruction of the balance of the global political system, since the eightieth. Forget also about that certain policy has created what's known as international terrorism.

So, this is why the intelligence of HOA's Common Goal works a DISASTER MANAGEMENT TOOL through the combination of the GLOBAL DYNAMICS, which have been created by me, veteran environmental and political activist, journalist, novelist, poet and short story writer Khalid Mohammed Osman.

So, "It’s so beautiful when we combine"... thanks to Kess of Kes, the Caribbean Band and Peter Minshall... to read slowly and absorb the global dynamics to save ourselves and save our planet.

I think HOA's Common Goal should have been clear from this introduction to the global disaster.

It is the solution of all the problems that have happened and are still hammering us because of this certain policy.

The solution goes through the LPE of the Masses' Era, which is composed of global plans systematically arranged to replace what's called new world order, which is not more than a destructive scheme to control the world through the disaster this new world order causes in every place in the world.

The LPE explains what we need to do to control this global disaster and end it.

How Does HOA's Common Goal Solve Your Global Disaster?

Nothing will happen in this regard until you move. The move should be progressive and it should concern thinking about other people than yourself. It is about to think of what affects you also affects all of the people of the world, including the capital power, which has created this global disaster through that certain policy.

The activities will lead to knowing exactly how HOA's Common Goal solves your global disaster through the components of its LPE.

Read the sections of HOA's Common Goal below to know more and take actions.

Does HOAs Common Goal Make Any Sense to You?

* Do let me know that. Use the form below to write comments on HOA's Common Goal. When your page is published, share it in good media. Thanks.

* You can watch movies on the global disasters I am talking about on HOA's Common Goal on TVCinemaApp.com/tv-cinema-app-blog.html.