The HOA's Political Site Map is the 11th sitemap on the HOA's Network. It leads to the first primary pages that built the Horn of Africa's website. However, this sitemap is divided into two sections.

The first is what you are reading here and the second is at the HOA's Political Section. 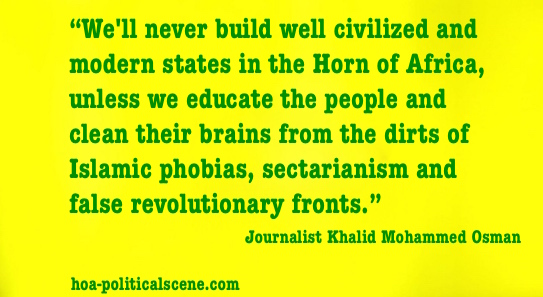 The political articles tips with the analyses included pave the way to understand the political development in the Horn of Africa after the independence of many countries in the African region, which ended by the liberation of Eritrea and the revolutionary shift in Ethiopia.

The Conspiracies to Draw the Political Site Map of HOA!

Most of the political development in recent history concerning the neighbouring countries to Ethiopia and Eritrea cannot be understood without having to explore the impacts of politics between them.

It is a common knowledge in this regard that the military religious regime in Sudan has played the main role to affect the development of politics in most of the countries in the region.

The Sudanese dictatorial regimes have always interests to topple any positive political development towards achieving civilised, modern and secular states in the region, as they want it to run with their false Islamic scheme, so they always export their terror and conspire against the other states.

One of the proofs to this satanic policy, which was inherited from the Muslim Brothers in Sudan (NIF) is that the ﻿﻿Sudanese dictatorial regimes﻿﻿ have plans they carry through the Sudanese regional policy and even the Sudanese sectarian parties have plans to build loyalties in Ethiopia and Eritrea.

The two political powers which seem different are not different at all, as they both use their politics of myth ruled definitely by their superstitions to spread slightly in other states in the region.

The Sudanese dictators try to spread the Sudanese regional politics by building fundamental allies in the region and the sectarian parties by building sects. All of this is a kind of conspiracies against real revolutions like what they saw in Eritrea and Ethiopia and afraid of.

The religious dictators have trained the so-called (Jihadists) of Eritrea and Ethiopia and developed the Somali Islamic Courts Union led by ﻿Sharif Sheikh Ahmed﻿ who was educated in the university of Kordofan in Sudan and the African Islamic Institute.

During his term in Somalia, the courts established what is known by Alshabab. See the brief history of Somalia. The Sudanese regime played to escalate the devision caused by the Somali composition of clans and religion.

So, the Sudanese fundamentalists and the Sudanese political parties from the right wing have always plans to spread their schemes to other states in the Horn of Africa and draw the political site map of many states as they wish.

Before the last Ethio-Eritrean wars, the regime of Sudan plotted to grow the differences between the (EPLF) and the (TPLF).

The regime knew at that time very well that the development of relations between the two revolutionary fronts will sweep the political site map of the region and throw them out of history, with many other leaders of similar right-wing parties in the area.

The political inspiration between the two revolutions in Eritrea and Ethiopia was strong. It is already planned on the liberation field to to work together to achieve freedom and independence and improve the political scene.

To break it, the Sudanese regime played on the Ethiopian grounds to escalate the problem of Bademi and Zalembesa areas in Eritrea and convinced the Ethiopian leaders that they will win any war.

The dictators in Sudan even opened the Sudanese borders to the Ethiopian army to curve through until the Read Sea to siege Eritrea in case the Eritrean tried to flee to Sudan and to CURVE and press them towards other parts of the Eritrean plains.

While most of the sincere efforts made by other neutral neighbours began, the Sudanese regime played "the devil whispers" in the ears of the Ethiopian leaders that they could simply cast their "devil allies" in Eritrea to the sea and get Eritrea back to Ethiopia.

About the Political Site Map of the HOA's Network!

You can either skip this section and link to those pages directly from the site maps below or read it for more information about this network. Thanks.

You can subscribe to the newsletter through the form you see at the top of the left column and receive updates about the political development in the Horn of Africa in your email box, in addition to some useful gifts of love to you, our valued reader.

However, if you dislike politics and want to read about business and love, you can do that at  home-biz-trends.com.

If you dislike this too, and want to read about something else, you can read the 100-beautiful-sites-in-the-world.com at Kordofan (linked above), or the TVCinemaApp.com to read about the cinema and watch movies.

The HOA's 11th political site map is also one of primary and secondary sitemaps visitors to this website have built in the Horn of Africa's Network. You can do this too and build your pages here to grow this network.

The Entire Primary and Secondary Political Site Maps Include the Following Pages:

Comments of the political site map appears on the section of the page below the comment form.

If you liked the Horn of Africa's Political Site Map, please do share the love through the buttons below, at the left column or at the bottom of the page. Thanks.