The Dynamic Critique, which is part of the global dynamics, created by me, the veteran activist, journalist and poet Khalid Mohammed Osman gets into the heart of global political history to criticize it as being forged and even plotted, by a way or another that has resulted in massive human disasters! 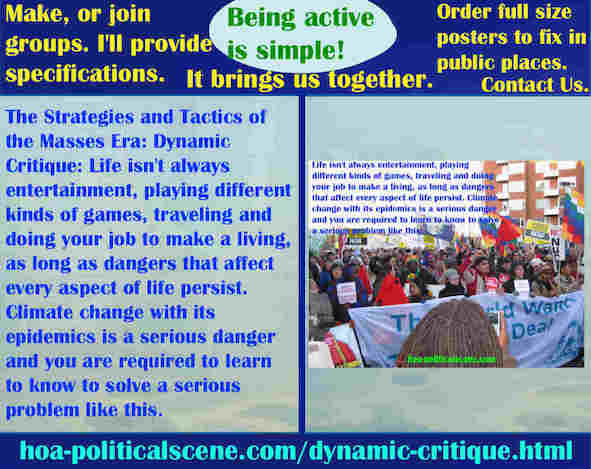 hoa-politicalscene.com/dynamic-critique.html - The Strategies and Tactics of the Masses Era: Dynamic Critique: Life isn't always entertainment, playing different kinds of games, traveling and doing your job to make a living, as long as dangers that affect every aspect of life exist. Climate change with its epidemics is a serious danger and you are required to learn to know to solve a serious problem like this.

The massive human disasters started with the operations of ending the Cold War era and they are still continuing in some parts of the world. However, it is not only the political crises which contributes to these disasters.

The ending of the Cold War era and the continuation of the growth of the capital has led to more human disasters caused by global warming or what's known as climate change. Climate change caused the exacerbation of pandemics.

The Initiation of Dynamic Critique!

The critique goes, as dynamically as to the Cold War Era, cites it and connects it with its result, which is what's still called New World Order. I take this as an era that has been produced by the intelligence wars to end the Cold War era, in which the Soviet leaders and Eastern Block leaders played the roles of dummies, that having no sorts of minds.

I personally think the world has lost its mind.

I don't know how people here and there can't see such things I am talking about, although they are very clear?

This is exactly what has motivated me to research, study this history and analyze it to come up with new dynamic ideas to serve the interests of the masses of the world, no matter to differences of beliefs, cultures and ideologies. Ideologies have already been destroyed by the destruction of the USSR and the Eastern Block.

Instead of communism, now we have international terrorism, so the confronting ideologies of capitalism and communism have changed to religious phobias, both (Christian and Islamic). Despite this fact, capitalism still works strongly and dominates the poor world and even the poor sectors in its homeland.

So, the Dynamic Critique is very sharp to the rulers, or governments that participated in creating all incidents during the operations to end the Cold War era and then again paved the way for more human disasters by attacking the Ozone and changing the ecosystem.

If you are wise enough, you will join the project to participate in the creation of the ERA OF THE MASSES to replace the era of the classic political parties and their classic systems, or what's called the new world order, which is not order at all with all of these human and nature disasters. 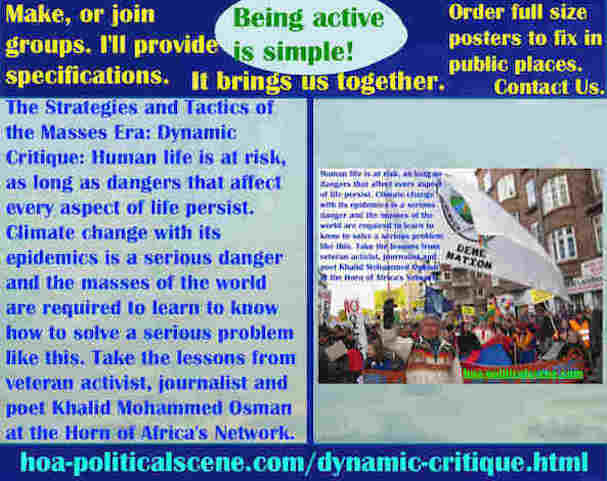 hoa-politicalscene.com/dynamic-critique.html - The Strategies and Tactics of the Masses Era: Dynamic Critique: Human life is at risk, as long as dangers that affect every aspect of life persist. Climate change with its epidemics is a serious danger and the masses of the world are required to learn to know how to solve a serious problem like this. Take the lessons from veteran activist, journalist and poet Khalid Mohammed Osman at the Horn of Africa's Network.

Dynamic Critique with Ideas that Lead the Eritrean Masses to Plant More than 5,000,000 Eritrean Martyr's Trees ... 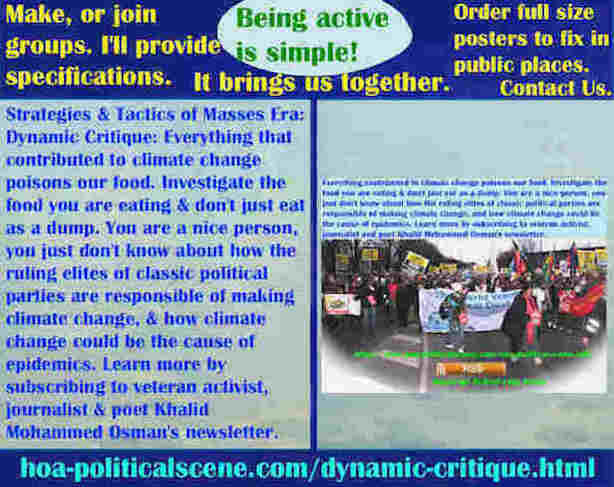 hoa-politicalscene.com/dynamic-critique.html - The Strategies and Tactics of the Masses Era: Dynamic Critique: Everything that contributed to climate change poisons our food. Investigate the food you are eating and don't just eat as a dump. You are a nice person, you just don't know about how the ruling elites of classic political parties are responsible of making climate change, and how climate change could be the cause of epidemics. Learn more by subscribing to veteran activist, journalist and poet Khalid Mohammed Osman's newsletter.

Dynamic Critique with Motivational Ideas for the Sudanese Revolution ... 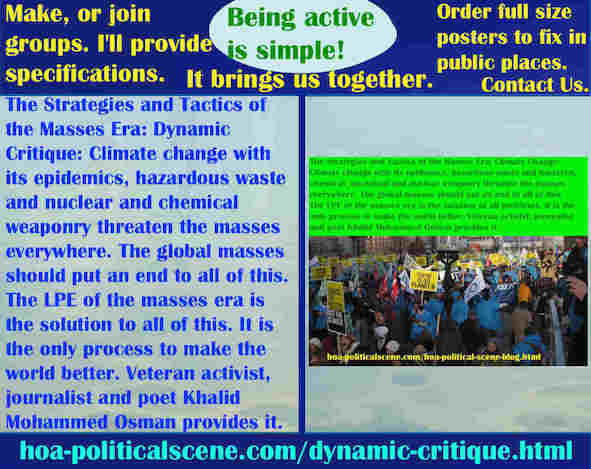 hoa-politicalscene.com/dynamic-critique.html - The Strategies and Tactics of the Masses Era: Dynamic Critique: Climate change with its epidemics, hazardous waste and nuclear and chemical weaponry threaten the masses everywhere. The global masses should put an end to all of this. The LPE of the masses era is the solution to all of this. It is the only process to make the world better. Veteran activist, journalist and poet Khalid Mohammed Osman provides it.

Dynamic Critique with Inspiring Creation of the Dynamics of the Sudanese Martyr's Tree ... 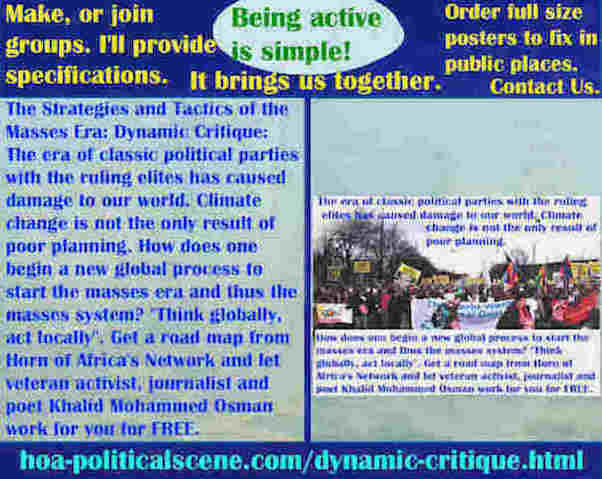 hoa-politicalscene.com/dynamic-critique.html - The Strategies and Tactics of the Masses Era: Dynamic Critique: The era of classic political parties with the ruling elites has caused damage to our world. Climate change is not the only result of poor planning. How does one begin a new global process to start the masses era and thus the masses system? "Think globally, act locally". Get a road map from Horn of Africa's Network and let veteran activist, journalist and poet Khalid Mohammed Osman work for you for FREE.

Dynamic Critique with Dynamical 3 Mechanisms for the Sudanese Revolution ... 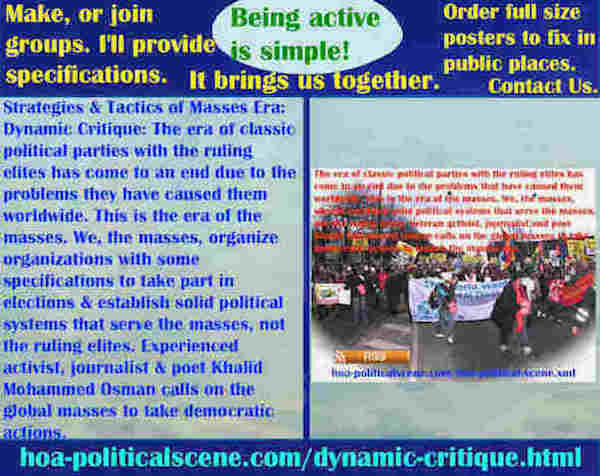 hoa-politicalscene.com/dynamic-critique.html - The Strategies and Tactics of the Masses Era: Dynamic Critique: The era of classic political parties with the ruling elites has come to an end due to the problems they have caused them worldwide. This is the era of the masses. We, the masses, organize organizations with some specifications to take part in elections and establish solid political systems that serve the masses, not the ruling elites. Experienced activist, journalist and poet Khalid Mohammed Osman calls on the global masses to take democratic actions.

Dynamic Critique with Dynamical Analyzing to the Conspiracies of the Muslim Brothers, the Founders of International Terrorism ... 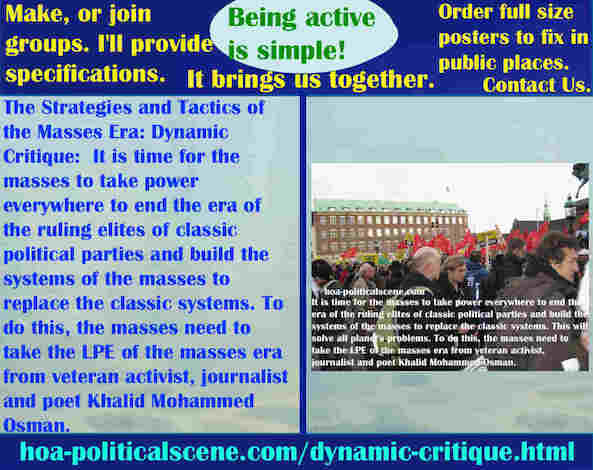 hoa-politicalscene.com/dynamic-critique.html - The Strategies and Tactics of the Masses Era: Dynamic Critique: It is time for the masses to take power everywhere to end the era of the ruling elites of classic political parties and build the systems of the masses to replace the classic systems. To do this, the masses need to take the LPE of the masses era from veteran activist, journalist and poet Khalid Mohammed Osman.

Dynamic Critique to Empower the Masses! 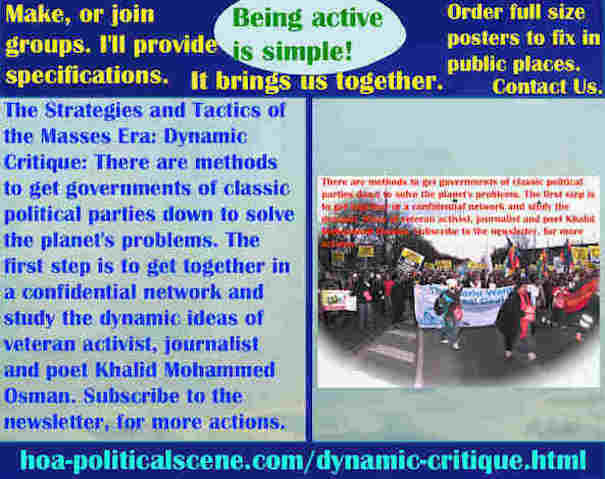 hoa-politicalscene.com/dynamic-critique.html - The Strategies and Tactics of the Masses Era: Dynamic Critique: There are methods to get governments of classic political parties down to solve the planet's problems. The first step is to get together in a confidential network and study the dynamic ideas of veteran activist, journalist and poet Khalid Mohammed Osman. Subscribe to the newsletter, for more actions. 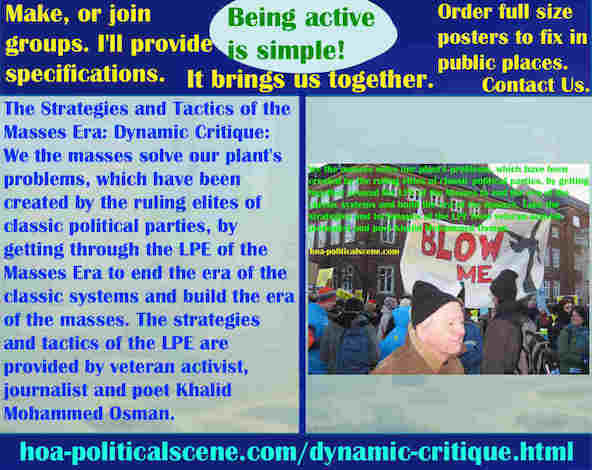 hoa-politicalscene.com/dynamic-critique.html - The Strategies and Tactics of the Masses Era: Dynamic Critique: We the masses solve our plant's problems, which have been created by the ruling elites of classic political parties, by getting through the LPE of the Masses Era to end the era of the classic systems and build the era of the masses. The strategies and tactics of the LPE are provided by veteran activist, journalist and poet Khalid Mohammed Osman.

Are You Becoming a Believer?

Well, since you are all the way until this line, so you might consider joining the Masses Era. Be the start. Subscribe to HOA Political Scene Newsletter, confirm your subscription and Contact Us for joining the era.

Post the link of this page and the posters on family oriented websites and fix the posters in public places in your area.

Forward HOA Political Scene with a link of this page to all of your friends and advice them to do what you did.

Use the comments form below to write comments on Dynamic Critique. When you got your page published, share it on good websites and apps.

Watch Dynamic Critique at TVCinemaApp.com on movies and documentaries. Read about beautiful places that have been impacted badly by climate change with some Dynamic Critique on 100-beautiful-sites-in-the-world.com.