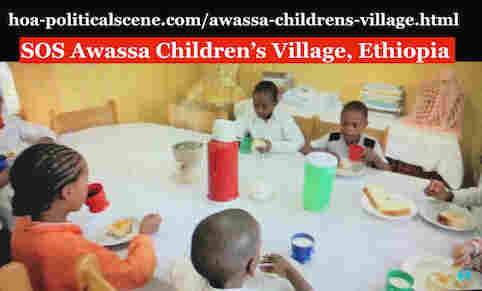 hoa-politicalscene.com/awassa-childrens-village.html - SOS Awassa Children's Village in southern Ethiopia, a village I sponsor since a long time.

With their reliable help and support those children are now provided with proper medical care, best school, balanced diet, warmness and security.

Above all, they are so relaxed and enjoyed to have a family whom they trust. The administration of Awassa Children's Village has augmented the total number of children living in the family houses to 149.

On the other hand 12 of Awassa Children's Village grown up girls who are above the age of 16 joined the youth facility, where they rehearse an independent life. The girls are now getting along with life in the facility.

And the young leaders in the staff are always on their side to guide and support them on their day to day activities. The little ones are also doing very well. They are attending their schooling properly.

Mothers have also special refreshment training and experience sharing on "How to bring children with good emotional, moral and aesthetic values".

It is a pleasure for them and Awassa Children's Village's Dads to see the grown up children being successful. Some of the youth who have graduated from different colleges and universities secured jobs and some of them are progressing on their studies.

Two girls have graduated in modelling from SOS Vocational Training Centre – Kenya, and left for South Africa for a chance to get further studies. One youth headed to Canada University after having finished his college study at SOS Hermann Geminer International College – Ghana.

Two of the children who were attending their primary school have left for Swaziland passing the entrance exam to join Waterford Kamhlaba United World College.

Awassa Childrens village had special farewell party for all of them, and they were accompanied by their sisters and brothers to the airport in the capital.

In addition, Awassa Children's Village has enjoyed different celebrations making all the people there getting together during the past couple of months. Mother's Day Celebration was among these days of pleasure. Best SOS Mother of the year has been elected and awarded special prize.

Awassa Children's Village was also sympathetic enjoying Easter along with street children. They have donated the money they collected as well as used clothes.

Children are enjoying different activities in their respective clubs. Scout Club has been one the adorable clubs. Due to attractive activities the number of new club mates has increased, so the club is now considered as a role model for other clubs in the villages in Ethiopia.

Awassa Children's Village members are very active in the sanitation of the villages’ compound as well as taking part in other social activities in the neighbourhood. They have hanged up small containers on trees showing the village community how to use them for garbage.

The newly established Day Care Centre is in full capacity. The centre has a main objective to help poor mothers and their children.

As the centre is accepted by the nearby communities and considered to be a role model by the local small government body (Kebele) the overall activity of the centre has been aired on the National TV, the sole TV station in Ethiopia. For TVs, see the cinema TV at TV Cinema App (Publisher).

It has now been a half year time since the centre started its services. Currently, the Awassa Children's Village centre is supporting 100 children.

The Medical Centre in Awassa Children's Village is successfully reaching out and approaching its services to the community in the surroundings.

Awassa Children's Village has renovated and reconstructed the buildings and added another block as the number of the beneficiaries is increasing significantly. The overall activities of the centre were aired on the National TV.

Awassa Children's Village strengthens its training for those children with special needs. In addition to the children academic and vocational training, the village is giving a path-way to silk production.

In addition to Awassa Children's Village, you may also be interested in the following humanitarian articles on the Humanitarian Network:

Looking for doing any kind of humanitarian network?

I am just right here beyond those lines, too close to you to close you in this circle of success, if you want to do any activities like those I am doing right here. Just use the form at Free Online Consulting Services.

Use the following comments form to comment on Awassa Children's Village, or to write about it.

Comments, or new articles about Awassa Children's Village appear linked to beyond the comments form.