What the ICC Needs to Treat Crimes in Sudan?

What does the ICC need to enforce decisions on the member states? 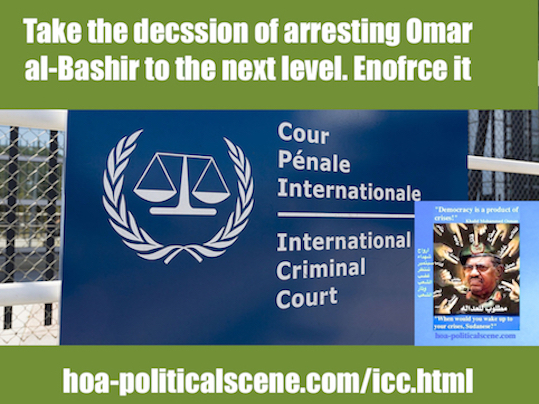 hoa-politicalscene.com/icc.html - The International Criminal Court should take its own arrest for the sudanese dictator Omar al-Bashir very seriously to enforce it on the member states of Rome Statute.

Rome Statute is a treaty constructed and adapted by a diplomatic conference in Rome on 17 July 1998, entered into force on the first of July 2002 and joined by 123 states as of October 2017.

Since then the treaty established the International Criminal Court itself to carry on different international lawsuits submitted to it for adjudications. The list of the indicted includes the following: 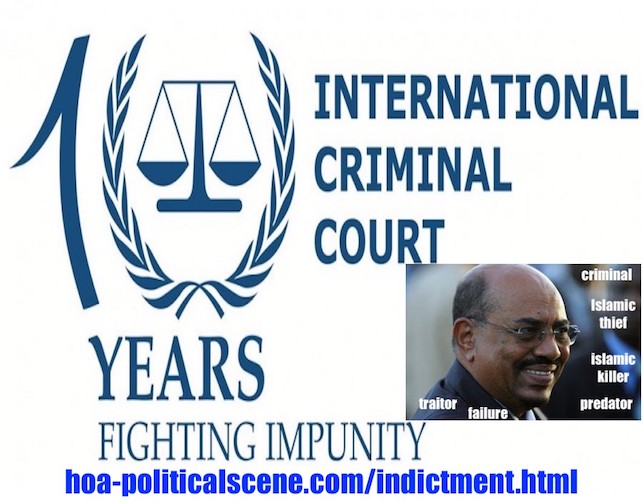 hoa-politicalscene.com/icc.html - ICC: The International Criminal Court shouldn't tolerate a criminal like the sudanese dictator Omar al-Bashir and his criminal predators.

The International Criminal Court is established in The Hague in the Netherlands, where the jurisdiction has to prosecute individuals for the international crimes of genocide, crimes against humanity and war crimes.

It works in two cases when the United Nations Security Council or individual states refer situations of international law violations to it, or when national courts are unwilling to prosecute criminals.

It is established and work by Rome Statute adopted as mentioned on 17 July 1990 and entered into force on 1 July 2002.

As for the Sudanese military religious regime's leader called Omar al-Basher, there is a question, or two.

What is behind the call to submit the dictator to the International Criminal Court?

Why Omar al-Bahir's arrest warrant hasn't been succeeded after the indictment of the International Criminal Court?

The ICC and Omar al-Bashir!

The International Criminal Court goes to the point from one angle! The crimes in Sudan are committed in the whole country, not only in Darfur! The Sudanese people are detained in the ghost houses, tortured, raped and shot in the north.

As journalist, I know they should take time to collect data from the Sudanese trades union, syndicates and the legal channels in the country, which the dictators have banned in 1989.

I think Luis Moreno Ocampo, the prosecutor of the International Criminal Court (ICC) gives the leader of the dictatorial regime in Sudan a new-lease of life by calling to submit him to the ICC for wars crimes in Darfur and by releasing such news to the media.

The Sudanese people are victims of torture, rape and massacres in the north of Sudan too.

The leaders of the National Islamic Front (NIF)'s coup have not committed crimes in Darfur only. They have started those crimes from the first day they came to power through their military coup in 1989 by arresting opponents and transferring them to the Ghost Houses.

In the ghost Houses, opponents faced different kinds of tortures. Documents on such criminal acts are in a Sudanese legal channel for this act, established in Cairo by some Sudanese who fled to the Egyptian capital city!

The Sudan Human Rights Organization (SHRO) has many documents on this issue.

The dictatorial regime has also banned all the Sudanese trade unions and syndicates and forced some leaders and cadres from those unions to flee the country.

Members of those unions who stayed in Sudan are living in fear for a long time before the signing of the Peace Accord, which was called the comprehensive Peace Agreement with the Southern rebel movement (SPLM). 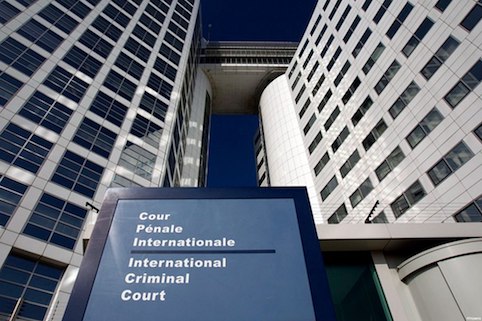 Some of them have faced detentions, released, and put in their houses under restricted move orders.

The dictatorial regime executed so many opponents who led other military coups to overthrow the regime or to restore democracy.

One of the procedures of the executions had happened in Ramadan in spite of the fact that their religious beliefs forbid killings in this holly month.

In addition, the military regime executed fellows from the army who tried to follow the same coup-process, which brought the recent regime into power.

Therefore, the call to submit the leader of the leader of the military religious regime in Sudan to the International Criminal Court for crimes committed in Darfur alone is a chance for the dictator to perform all his recent acts challenging the decision of the ICC.

He visited Darfur to perform his tragicomedy dance defying the International Criminal Court's accusations, calling the fractions of the rebels to negotiations and announcing to forgive children who participated in the late attack on Khartoum.

This is why the African Union and the Arab League say the call to submit the dictator to the International Criminal Court will destroy the peace process in the country.

However, I disagree with this point of view as I disagree with the call to submit the dictators to the International Criminal Court for crimes committed in Darfur only and the processing attempts of such call.

There should be another process, for the International Criminal Court (ICC) to implement through legitimate and legal Sudanese channels and the resolved trade unions and syndicates or the coming transitional government, considering the period of transformation to the political scene in Sudan.

A careful look to the way war crimes suspect in Bosnia Radovan Karadzic goes will enlighten those legal channels to have patience until the process for crimes committed in Sudan since 1989 goes into prosecution.

This is better than just creating an atmosphere of critical dilemma to enforce nonsense into responsible legalities.

Follow other links to the same political dilemma in Sudan and the indictment.

Want to write something to me? Click on Comments.

Here's also additional link to write political analysis about this topic or any Horn of African's topic on the platform of Horn of Africa's Friends!

Please, note that, the system deletes any irresponsible input into those forms and bans bad users.

Are you from the area? Do you know what is going on there? Are you fluent in English and Arabic? Freelancers wanted! Fill the form here and provide details about you and a summary to news or one topic analysis.

However, you can use the following COMMENTS form on ICC page to comment or write articles about this topic. Feel free to download your "Thank You" gifts when you finish submitting the form.

In addition, make sure while going through the process to submit comments on ICC to elect to receive emails notifications about replies to your post.

The crimes committed by NIF throughout its history should be documented comprehensively here. Cases of the crimes should try later on in front of national …

The following SOLO Build It Tools on the link at the bottom empower the ICC page! They empower actually the entire website. I love them because they make all website building and relevant technologies snap.

Love on the Internet Time on iTunesالحب في عصر الانترنت

Rising of the Phoenix
صَحْوَة الفينيق

hoa-politicalscene.com - "Rising of the Phoenix" by Sudanese poet, writer and journalist Khalid Mohammed Osman on iTunes.

Want to Publish Your Book?

I publish it for you. PROVIDE good details about your book, when you Contact Us.

Do You Want this Arabic Poetry e-Book Free?
Well, subscribe to the HOA PoliticalScene newsletter here, or use the form below and then Contact Us to tell me that you came to it from this page.