Save Darfur Coalition is a British Scenario!

When we hear about the "Save Darfur Coalition" and know from where it comes, we stop thinking... our brains freeze.

The campaign of the British media war called the "Save-Darfur Coalition" runs as announced for the war torn Sudanese region of Darfur.

It is obvious that the conspiracy pays itself.

Those who fuel it in the Sudanese military religious regime and in the international power have their own interests in the crisis in Darfur.

However, both sides have many dead rats in the cases and they throw aches on the eyes.

Any Sudanese intellectual understands VERY WELL now that this campaign is just a British scheme to address the pernicious colonial mistakes in Sudan.

At the side of the negotiations, some folks from Darfur and their cats want to claim the political power and they have direct personal interests in power and wealth, wether in the Fur Liberation and Justice Movement, or in other movements. 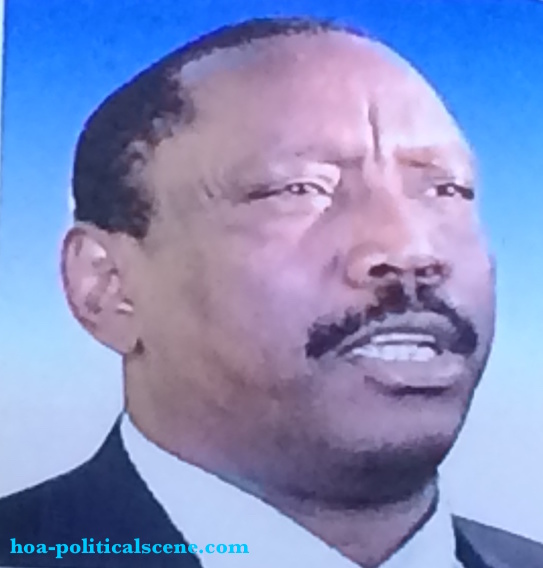 Darfur Peace Agreement Negotiations seem like cats negotiations over a devastated meal table with food not well cocked & even rotten. What do they want in the Liberation and Justice Movement?

It worth repeating, to recall the past before those dictators came to power through their coup in 1989 and remember the robbery gangs and the smuggling of the arms from Libya, Chad and some other parts in the Sudanese country to create the chaos in Darfur today.

The traditional parties in Sudan had their share in the recent crises when their governments failed to address the problem of the robbery gangs and implement strong disarmament program to collect the arms. Read more details through the links below.

What’s Behind Save Darfur Coalition?

Whether some Darfur rebels like the Salvation Alliance for Darfur do their jobs or not, the Sudanese people understand that Britain has planted timed bombs in the one million square miles country to explode in the future and ensure the country will appeal to them to help it solve its political problems.

The same mentality that runs the Save Darfur Coalition runs at the same time the full presence of the international forces in Afghanistan to control and protect the drug trade fuelled by the Afghan poppy to cover the deficit of the British Treasury and the impending economic collapse.

Check Schiller Institute for such fact at:

As for Sudan, many people who gained repatriation, or acquired refuge status, and resettled in Britain are not pure Sudanese Fur. Through the campaign, elements from other countries got legal protection and considered Fur to resettle in Britain.

They told false stories about their cases and apparently, anybody could identify them and know if they were Sudanese Fur or not.

Who cares since the concerned authority wanted only to expand the Save Darfur Campaign even by false refuge claims? 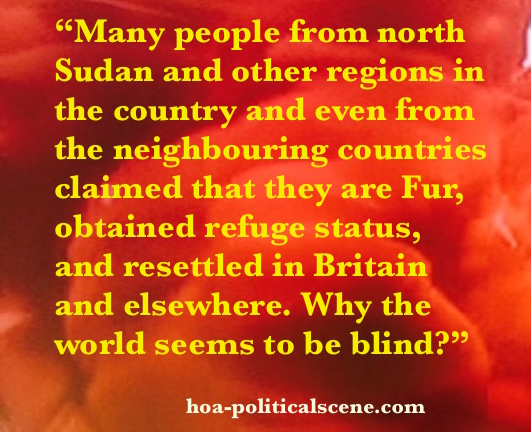 hoa-politicalscene.com - Save Darfur Coalition: Many people from north Sudan and the neighbouring countries claimed they are Fur, obtained refuge status and resettled in Britain and elsewhere.

Many people from north Sudan and other regions in the country and even from the neighbouring countries (like Eritrea, Ethiopia, Kenya, Somalia and Uganda) claimed that they are Fur, obtained refuge status, and resettled in Britain. Now, here come the threats of elements among those claimed to be Fur.

There are no concrete procedures to take only the pure Sudanese Fur for such program to resettle them in Britain or elsewhere because they only concentrate in their scheme to pass their agendas for Sudan.

However, they give the dictatorial regime in Sudan new lease of life every time in spite of that and try to invest the human misery with it to gain more feet in the country.

The British lead the Save Darfur Coalition to maintain their interests in Sudan. Time has arrived for the Sudanese people to work through their own political network to stop the conspiracy of the dictatorial regime.

Wake up Sudanese people. Wake up Fur. No one of the international or in the military regime interests in solving the political problem in Sudan. They invest it.

Obviously, there is no way other than to work from within in collaborative teams with the other opposition groups to stop the political deterioration in the country and keep it intact. Create the United Sudanese Nationalism Umbrella for your new political network.

Did You Know the Root Causes of the Conflict in Darfur?