The Sudanese Genocide perpetrated by the Interim Military Council and the Janjaweed in Khartoum on the third of June 2019, which corresponded to Ramadan 29, is one of the rare genocides in the world except in Sudan. The regimes of Egypt, Saudi Arabia and United Arab Emirates assisted the foreign mercenaries and the Muslim Brothers to commit the genocide. 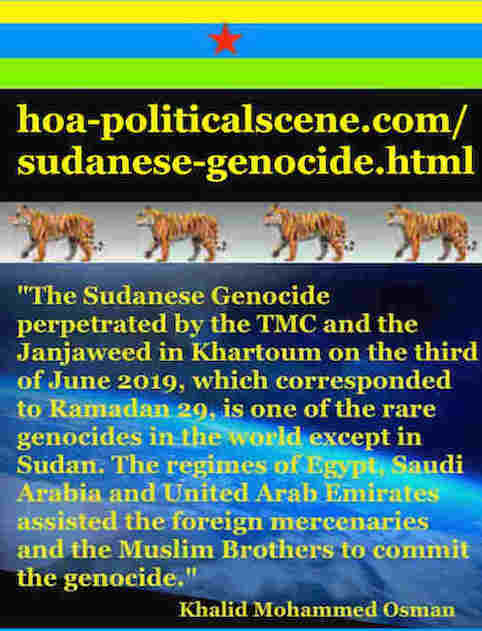 Arabic readers, please get to the Arabic version at Sudanese Political Genocide and please comment and share. Thanks.

Since then, Sudan has fallen under the occupation of the Janjaweed. The Janjaweed is composed of foreign mercenaries and they have committed the first genocide in Darfur in western Sudan on 2003 with the participation of some Sudanese criminals led by the Sudanese dictator Omar al-Bashir.

The Darfur crisis escalated and thus the Darfur rebels started to launch wars against the Sudanese tyrant. The Fur began to flee to Britian where they gathered and the Save Darfur Coalition launched to deal with the issue.

Omar al-Bashir has organized those criminals who are foreign mercenaries in the Janjaweed forces to commit the genocide in Darfur. The criminal who is wanted for crimes against humanity by the International Criminal Court (ICC) has renamed the Janjaweed as the rapid support forces and given its leader Mohammed Hamdan Humidity a high military rank with other foreign mercenaries to protect his regime.

He has also organized the Jihadists militias before the organization of the Janjaweed for the same reason. The Muslim brothers party which has come to power by the 1989 military coup and enabled al-Bashir to be the president has also organized many other militias.

From this picture you will see that many leaders of the Muslim Brothers party have militias to protect their interests in power and wealth. 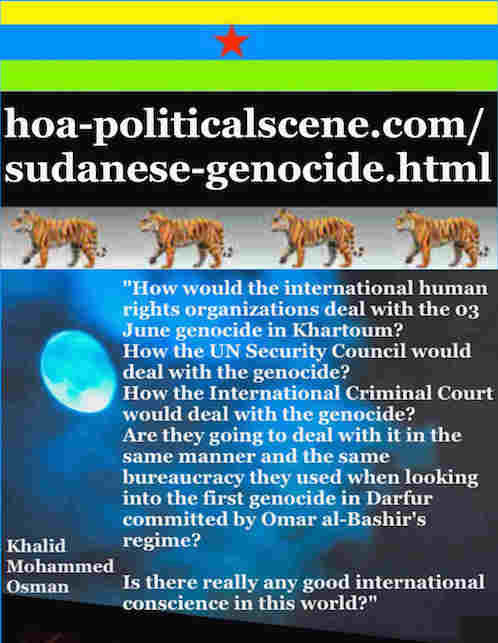 The recent Janjaweed's committed genocide has claimed the lives of more than 6.300 Sudanese. The victims of the Janjaweed's genocide in Khartoum on the 29th Ramadan include children and women.

In the holy month of Ramadan, normal Muslim people fast, pray more and spend the nights asking for God mercy. The sins like drinking alcohol, raping, or even making love to their wives in the fasting day, robbing and killing are rebidden. Such crimes are forbidden of course in all months of the year, but any crime committed in Ramadan has a greater punishment by God.

Despite these clear Islamic ethics and rules, the military council, which includes Muslim members and the Janjaweed have committed the Sudanese Genocide in Ramadan. There is no any other world to describe the crime against humanity they have done in that holy month. 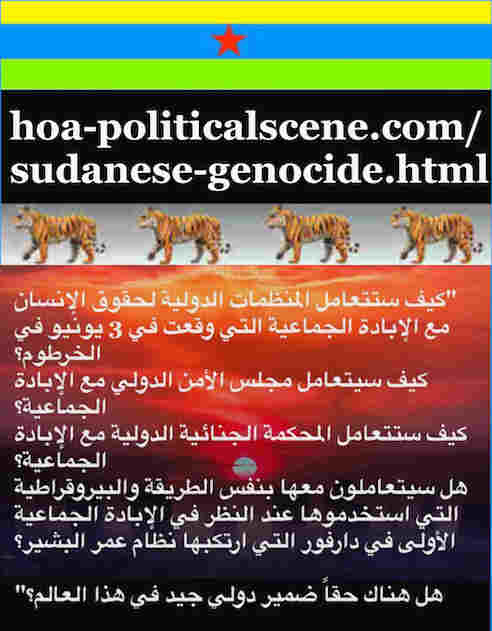 They burned some of the victims alive. They tied some of the young people on heavy blocks and threw them in the Sudanese Nile to be drown alive. They raped many women, including children and grandmas. They showed the underwears of the innocent women they have raped on pictures and danced while smoking hash to celebrate the rapes and the killings.

Could any severe judgement in courts be enough, or equal to the crimes they have committed?

Although the transitional military council has committed the Sudanese Genocide, denied that the first time and then acknowledged and admitted all of that was its mistake, the Janjaweed continues to oppress the Sudanese people on the streets. They have hundreds of detainees in detention centers no one knows where are they. They have kidnapped many other hundreds of people no one knows where they are.

Egypt, Saudi Arabia and UAE Assisted the TMC to Commit the Sudanese Genocide!

But, are they only the military council and the Janjaweed who have committed the 03 June genocide in Khartoum?

Those criminals have been first advised by elements of the regimes in Egypt, Saudi Arabia and the United Arab Emirates to use a specific plan with strong forces to break the people's sit-in in the general army command.

The Saudi flights were the only one that landed in Khartoum, although all of the airlines have withhold their flights. The flights carried military equipments for the Janjaweed.

To break the sit-in the Janjaweed used heavy and aggressive shooting that continues for hours, during which army vehicles belonging to the UAE have been driving on the streets.

The UN, human rights organizations and the International Criminal Court (ICC) should hold Egypt, Saudi Arabic and the UAE accountable for the Sudanese Genocide. These three conspiring states against Sudan and the integrity of its land and the sovereignty in Sudan should never be part in the Berlin Conference about Sudan.

Instead, they should be boycotted. International investigations should take place to bring the conspiring elements in these regimes to the international justice. 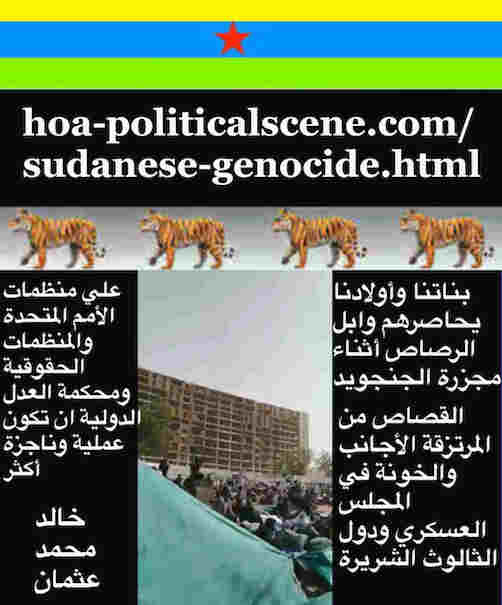 How would the international human rights organizations deal with the 03 June genocide in Khartoum?

How the UN Security Council would deal with the genocide?

How the International Criminal Court would deal with the genocide?

Are they going to deal with it in the same manner and the same bureaucracy they used when looking into the first genocide in Darfur committed by Omar al-Bashir's regime?

Is there really any good international conscience in this world?

The ICC has fallen to arrest and bring Omar al-Bashir and his collaborators in Darfur genocide to justice, so are we going to expect that it will succeed to bring the military council and Janjaweed to justice?

We hope it will.

We hope the international community will wake up to support the Sudanese people and bring them justice through the worldwide justice court.

Sudanese Genocide Continues from Other Episodes!

The Sudanese Genocide is well connected with other articles. It is an episode with more than 300 episodes in Sequence 1 of Sudanese articles. It's one of the series in the following episodes and it continues on other episodes:

Undone numerically episode, like this one you are reading now titled Sudanese Claims, with its Arabic version at Sudanese Political Claims.

You might need to read the episodes mentioned above to understand the topic better. See other episodes in the sequence below.

What You Think about the Sudanese Genocide?

I know it is difficult to say, because there is no suitable words to describe what has happened to the Sudanese people that day. But, maybe the pain should inspire people to write.

Write comments on Sudanese Genocide in the following form and then when I publish your page, share it. When you submit the form write your email to receive notifications about any comment on your comment. So, you can interact with other readers that way.

Your comments make a difference and make the Sudanese Online commentaries a good read. You can also make Sudan Online your home page and refer to it always, when you get to the internet. Many thanks.

You can watch documentaries on Sudan, including Sudanese Genocide on documentary film at TVCinemaApp.com.

Comment C2 Entries on Sudanese Genocide appear at the section of the page above this paragraph and below the comments form.