The Sudanese advices here are not just for the purpose to promote the Sudanese intifada until the Sudanese people achieve victory over the Sudanese religious military regime of what's called the National Congress Party of Sudan.

In addition to that, the page includes a factual readout of the political problems in Sudan. It continues to analyize the overall deteriorating situation since the independence from Britain in 1956.

With the objective analyses of the development of the deteriorating political situation in the Sudan, the entire sequence of articles in this context foresees the Sudanese causes and the foreign causes of the political problems in the Sudan. 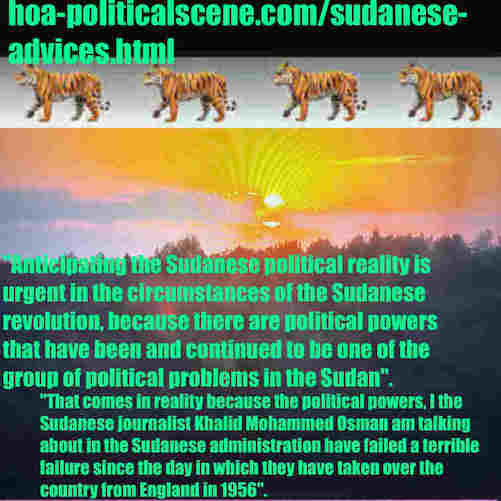 Anticipating the Sudanese political reality is urgent in the circumstances of the Sudanese revolution, because there are political powers that have been and continued to be one of the group of political problems in the Sudan.

That comes in reality because the political powers, I the Sudanese journalist Khaled Mohamed Osman am talking about in the Sudanese administration have failed a terrible failure since the day in which they have taken over the country from England in 1956.

So, you know by now that the Sudanese advices page is in a series of pages connected with each other, and each of which is a political episode in a Sudanese sequence of political articles that started with episode 1 at Sudanese Abilities.

Here is a special introduction to the pages of the Sudanese political sequence and some of its episodes, and then you can continue what I wrote on the Sudanese adversity. 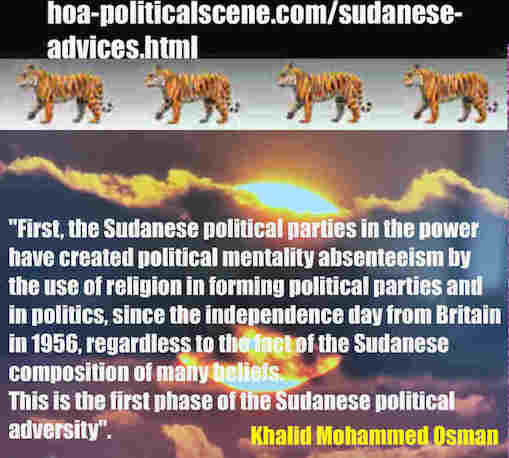 Sudanese Advices to Read the Root Causes of the Sudanese Political Dilemma!

Now here is the fourth phase of the Sudanese adversity and there might be other phases, you'll discover, before you read about below. This is a way to entice you to think... think... think.

And then, you'll get my mind.

The third phase of the Sudanese adversity, which was the Islamic Sharia Laws, was a pole. Moving forward in his pan-Arabist policies in 1980, Gaafar Nimeiry implemented the Sharia Laws in 1983.

He implemented these laws without any conscience under the supervision of the Islamic Convention Front, whereby Hassan al-Turabi, who was the head of the Islamic Charter Front, crowned the dictator Jaafar Muhammad an-Nimeiry as imam. The Arabs called him tiger.

The third government of the so called democracy in the Sudan, which was led by Sadiq al-Mahdi, the brother-in-law of Hassan al-Turabi was stuck on this pole. Sadiq al-Mahdi was not able to remove this pole, which his sister's husband has planted in the system.

Oh people, are we donkeys, or what?

I apologize to donkeys.

Sadiq al-Mahdi has been playing on this pole for many years, until his brother-in-law installed his second pole by on him using the elements of the National Islamic Front (NIF) in the Sudanese army to carry out a coup against al-Mahadi's government, which was unable to decide on the Sharia Laws.

That was and is still the main part of the political problems in Sudan.

The Muslim Brothers in Sudan are the fourth phase of the Sudanese adversity. Well, they should be the first phase, anyway. But, we take them here by their polices beside the Sharia Laws and as a political organization.

Here comes very strange phases of the Sudanese adversity made out of the fourth phase. 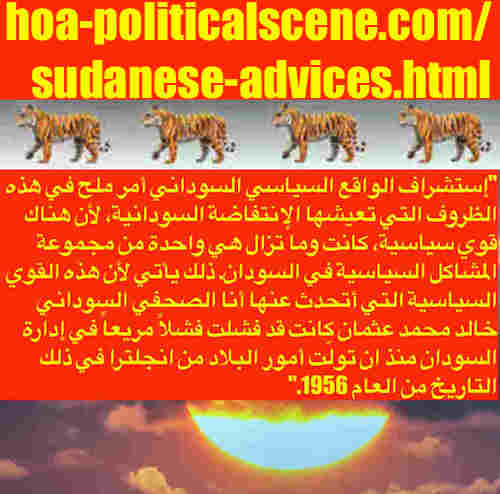 Sudanese Advices to Look into the Phases of the Sudanese Dilemma!

As soon as they began as Muslim Brothers, they put in place a conspiracy theory against Sudan. All the political events that followed in the Sudan and affected the Sudan's political scene are exposing this conspiracy, until this moment.

The Muslim Brothers conspiracy theory began by playing in the systematic grounds of politics, by resolving their organization every decade, renaming it by another name and making their way easier to come along with different tactics and strategies for each decade, to fit the demands of that decade.

This Islamic organization, which plays by foreign agendas and interests in Sudan is a satan. Period.

They changed the name to the Islamic Convention Front and used Jafar al-Numeri to carry some of their polices by implementing the Sharia Laws.

When the people of Sudan revolted in April 1985 to expel Gafar Numeiri, they encouraged one of thier allies in the Sudanese army to stop the Sudanese intifada, so they could break the Sudanese progressive power.

The Muslim Brothers' attempts since the day they started until now to break down the Sudanese progressive power is the fifth phase.

They did that also to enable the army officer to come with a cabinet to replace Numeri's regime. The army officer, Abdel Rahman Swar al-Dahab, who was the minister of defence in Numeri's regime became chairman of the transitional military council and surrender the power to Sadiq al-Mahdi.

They came with al Gizoli Dafallah, as prime minister and after that Swar al-Dahab who stopped the revolution and the PM were appointed  in high positions in the Islamic Call Organization.

This Islamic something in Sudan is the sixth phase of the Sudanese adversity.

When they removed the dictatorial regime, the Islamic Convention Front changed the name to the National Islamic Front, to play with other strategies during the period of Sadiq al-Mahdi's government.

That's what the Sudanese call "our oil is in our home".

The marriage relation between the Muslim Brothers and the Umma party is the seventh phase of the Susanese adversity.

During the times they changed the tactics and strategies, this political Islamic organization has shared part of the absenteeism of the mentalities with the Sudanese sectarian parties to keep the people of Sudan out of the know and ignorant in political issues.

But, they didn't only burn the political stages in Sudan. They burned the sectarian parties with this policy, so as to be the only political power in Sudan and they succeeded when they came to the power by their coup, which was led by another army officer called Omar al-Bashir.

So, burning the political stages in Sudan and burning the sectarian parties is the eighth phase and planning to be the sole political power is the ninth phase of the Sudanese adversity.

Aiming to deceive the people and making them fed-up of democracy is the tenth phase of the Sudanese adversity. 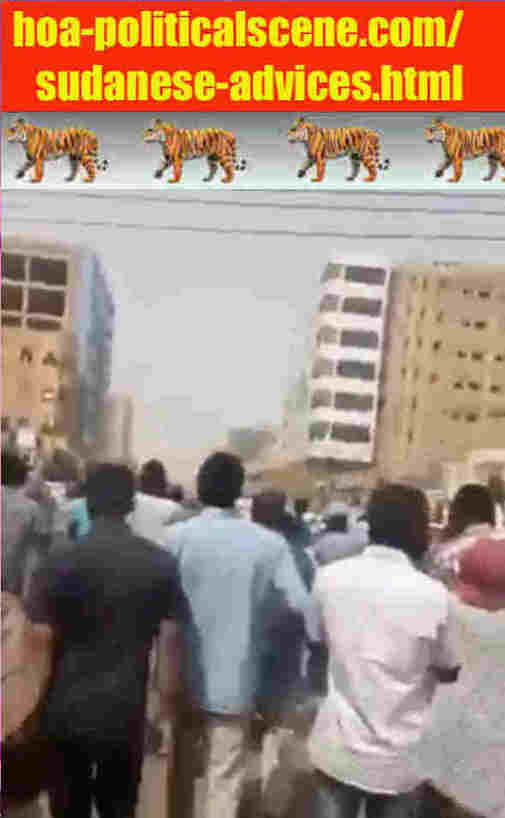 Think the SUDANESE ADVICES are Amazing?

You can write better Sudanese advices on the Comment C2 Entries form below. You can also write about Sudan on the same comments form. When I publish your comments on Sudan, share your page with your friends.

As you read Sudanese articles and commentaries, you might also be interested in Sudanese documentary movies. You can watch them on documentary film at TVCinemaApp.com.