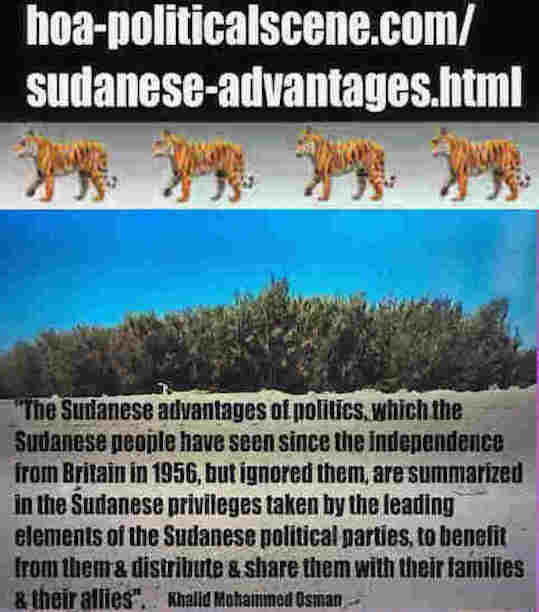 As for those who do not understand this statement, you will certainly understand it, dear ones, when you read this page about the political advantages and the other political episodes, which discuss the political dilemma in the Sudanese political scene.

To do this, follow the sections of the page, including the introductions.

So, Sudanese Administration is episode 7. The Sudanese Commentaries and the Sudanese Comments are also episodes in this sequence of articles. I am hesitating to give them numbers, because many other episodes could come out on the alphabetical and numerical construction of the episodes. The wise understand what I am saying.

This is what gets the HOA Political Scene the advantages of being bilingual network for the Horn of Africa. It already covers the entire African region, along with Chad and Democratic Republic of Congo (DRC), because they have some impacts on Sudan. The main bilingual directory, which indexes the bilingual section of the network is the Arabic HOA Political Scene.

It comes in a series of episodes in a sequence of Sudanese articles in English and Sudanese articles in Arabic. The advantages of outsourcing have make it possible to layout the organization of the episodes in this sequence for our loyal readers to have all the advantages of online education, which is in politics, although we don't have classes here.

So, they established such kind of entrepreneurship with no obligation, because they are sincere and thus they build a directory for them in simple pages. The wrote many articles at Readers comment, readers read good, readers write comments and readers write good.

There are more than 200 episodes in this sequence alone on the HOA Political Scene Blog Network. As you see from the numbers and the alphabetical order of the second terms after the term Sudanese, the sequence comes in a good construction of alphabetical and numerical order

This lays the foundation for other similar sequences for the other states in the Horn of Africa. This is a Horn of Africa's Network, as you know. 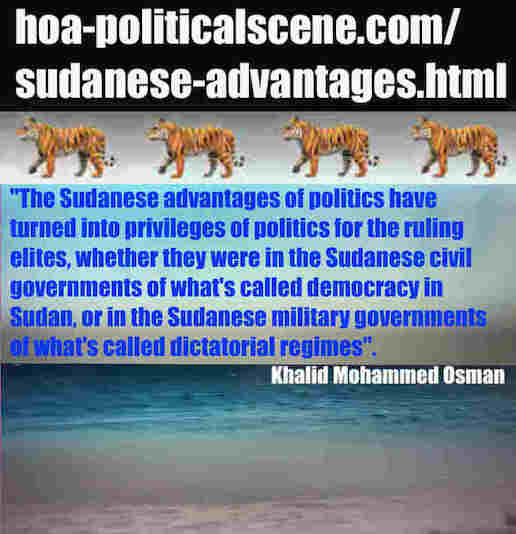 This should be the "Sudanese Advantages of Democracy". Ya Allah, they call it democracy!

They also shared that with the rich Sudanese families, which has contributed to the budget of their electoral campaigns and benefited afterwards from the opportunity to control the Sudanese economy.

The masses of these political parties in power, which are in fact poor masses, did not enjoy any of these Sudanese advantages and privileges that were available to the members of the authority and the rich families.

The poor voters had nothing of the Sudanese advantages and privileges of politics, although they voted for the parties in power and contributed to the winning of their elections.

All that was offered to these poor masses was crumbs from the rulers' tables. Ironically, these poor people were used to cut off from their own savings, which were too small to provide as charity and vows to those who died from the rich families of the ruling authorities.

Some poor Sudanese people were forced to work in the fiefdoms of the ruling feudal families, influenced by religious beliefs that say, "the free work for these gentlemen in their homes and their lands leads to paradise".

For all this, I say that the Sudanese advantages and privileges of politics have already persecuted the Sudanese people in three periods during the rule of the Sudanese sectarian parties.

This is a clear civil dictatorship?

As long as that is the case of democracy, how can the dictatorship be? 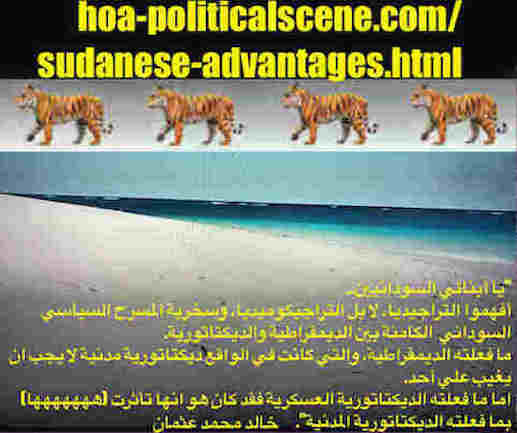 Understand the tragedy, and the political tragicomedy in Sudan, and even the ridicule of the Sudanese political theatre that lie between democracy and dictatorship.

What democracy has done should not be missed by anyone. At this point you'll understand that it wasn't more than a civil dictatorship.

These allies by name are the members of the Muslim Brotherhood (the Sudan wing), which is the base of the so-called Islamic National Fron (NIF)t, which is one of the bases of al-Qaeda in Sudan.

All of this must have been fully understood now, because it is not only the truth, but everything that I Khalid Mohammed Osman have been saying and explaining for many years, so that the overall benefit is from it. 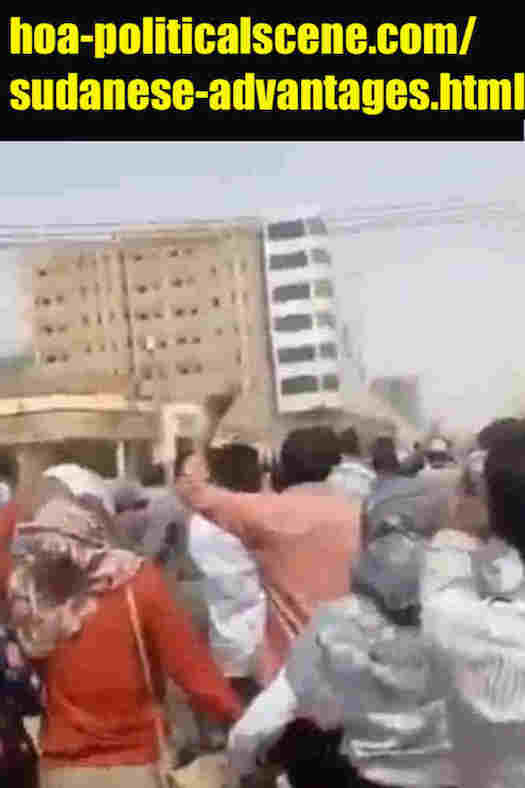 Between the Paradox and the Sarcasm of the Terms Advantages and Privileges!

From these political lessons, my reader knows that the advantages of democracy in Sudan have turned into the privileges of the dictatorship in Sudan.

It is clear to you, by now that the values of the two terms "advantage" and "privilege" have very frightening transformations in the Sudan.

It is also clear to you that even the advantages of federalism have been transformed into the privileges of the leading figures who took over the federal authorities in the Sudanese regions.

The advantages of federalism have also turned into special interests for their families and loyalists and transformed these users into a new capitalist class with all of the advantages of entrepreneurship that exacerbated Sudan's economical problems.

What Do You Think of the Comparison Between Advantages and Privileges in Politics?

Use the comments form below to answer the question, write about Sudan, or write comments on Sudan. Thanks.

In addition to the SUDANESE ADVANTAGES of politics, you might also be interested in Sudanese documentaries in movies. You can find find Sudanese movie documentaries at documentary film on TVCinemaApp.com.

Comment C2 Entries on SUDANESE ADVANTAGES appear at the section of the page below the comments form and above this paragraph.