The Sudanese Affairs of the state, including of course the political affairs has gone bad and wrong since the independence of the Sudan from England in 1956. The affairs of Sudan has been in disorder for long. So, how to manage that, so you could walk perfectly on two feet? 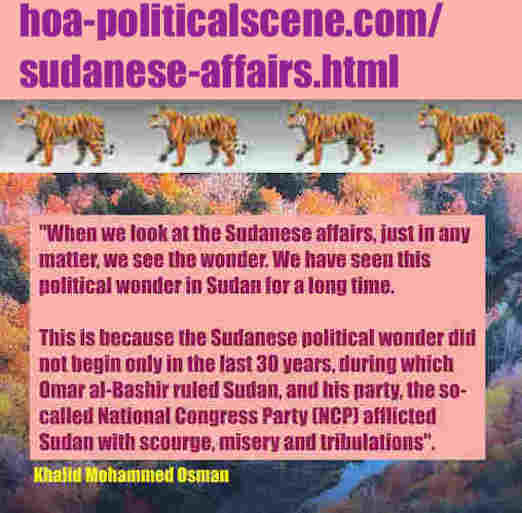 I don't have a shit in this article, you are going to read here below. I am so direct to the point and I know that it hurts to say the truth bout such Sudanese political affairs, which make everything in Sudan as hell on earth.

So, whether you like it, or not... what you will read here is the truth and all that you have to do is to correct the state of Sudan's affairs. Without having to do that, you will never be able to walk on your feet, or with your face up to look everyone on the eyes.

Preambles are good to start while reading any article. You get through them to know the backgrounds of the articles and whether there are resources for them, any connection between them, or not.

The Sudanese Affairs, which is episode 12 in a sequence of Sudanese political articles is a continuation of the following episodes:

Episode 8, Sudanese Advantages, with the Arabic version of it at Sudanese Political Advantages,

Episode 9, Sudanese Adversity, with the Arabic version of it at Sudanese Political Adversity,

Episode 10: Sudanese Advices, with the Arabic version of it at Sudanese Political Advices, and...

Episode 11, Sudanese Advocacy, with the Arabic version of it at Sudanese Political Advocacy.

In fact, to some levels it is a continuation of the episodes from episode 1 and it continues into other episodes.

As, I have mentioned the episodes are more than 200 episodes. So, get your mountaineering boots on to climb the mountain of these episodes. :-) 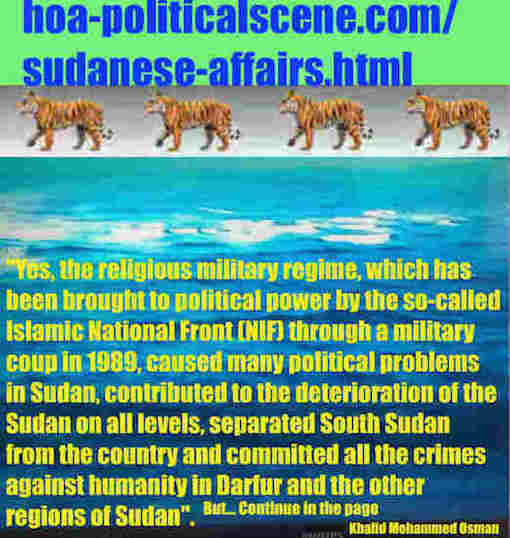 How the Sudanese Affairs have Gone Bad?

When we look at the Sudanese affairs, just in any matter, we see the wonder. We have seen this political wonder in Sudan for a long time.

This is because the Sudanese political wonder did not begin only in the last 30 years, during which Omar al-Bashir ruled Sudan, and his party, the so-called National Congress Party (NCP) afflicted Sudan with scourge, misery and tribulations.

Yes, the religious military regime, which has been brought to political power by the so-called Islamic National Front (NIF) through a military coup in 1989, caused many political problems in Sudan.

It contributed to the deterioration of the Sudan on all levels, separated South Sudan from the country and committed all the crimes against humanity in Darfur and the other regions of Sudan.

But the SUDANESE AFFAIRS have already been hit by all that has been bad for a long time. That is what led to the three military coups in Sudan, the first coup in November 1958, the second coup in May 1969 and the third coup in June 1989.

The coups have been welcomed, except for the third one according to a standard I will explain later in the context of this political article. The military officers have conducted the coups against the governments of the Sudanese sectarian parties during three periods of what's called democracy in Sudan.

Only one sectarian party from those ruling parties have assisted the military officers to assume political power. The Umma Party played the main role to bring military dictators to power through the first coup and the third coup.

The sectarian party did that when it was stuck at solving severe political problems in Sudan and when the party anticipated that the other sectarian party, which was the United, Democratic Party was about to make a remarkable political advantages and privileges to control the Sudan's political scene and win over the Umma Party.

Although the three coup d'état were to deal with bad Sudanese affairs and to annul the Sudanese political wonder, their leaders as soon as they seized political power have been enticed and even mesmerized by power and wealth.

They also became corrupt, just like the civilian leaders who took over the political authorities before them.

The civilian leaders who took over the political authorities since the British left Sudan were leaders of sectarian political parties. These leaders are originally from the Sudanese capitalist class and from religious houses.

Therefore, you should know that there are two factors that affect them. One of these factors is the religious factor and the second is the economical factor. 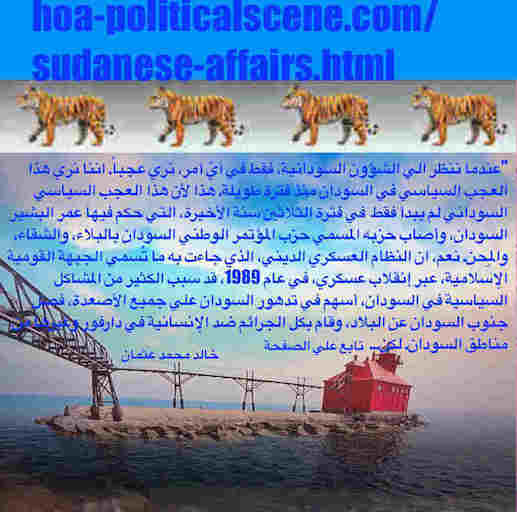 The economic factor is concentrated on a capitalist class that sees the country's economic problems only from a capitalist perspective. They have never experienced misery because they have not been subjected to it like the rest of the Sudanese people.

So they do not feel like being naughty and poor because of poverty.

The most important thing is how did these political leaders of the capitalist class become capitalists?

How did they get wealth?

Why did they have full fiefdoms that stretched in vast lands?

Why did they have a lot of servants and many people from the poor class who serve in these lands and palaces?

All these questions, which can not be answered from their part with transparency and credibility, reveal the scale of the systematic looting of Sudan's economical resources and manpower and place them in the hands of civilian political leaders who are leaders of religious sects.

This means that since the independence of Sudan, the religion has been used in the SUDANESE AFFAIRS for political, economical, and cultural purposes.

The cultural purposes were obscuring the rest of the poor class and ordinary people from the Sudanese bourgeoisie from seeing these facts that I mention here.

On this basis, the doctrine of religion, in addition to the social class of capitalism, were associated and inextricably involved in exposing Sudan to corrupt governments, whether they were civil or military.

They have been the root cause of Sudan's decline since the independence from England in 1956. As such, the Sudanese affairs have been plagued by political and economical corruption, plagued by strife and suffering, and have suffered the full deterioration over the years, more than 63 years.

This means that more than six generations have been suffering and are still suffering from the Sudanese adversities, caused by civilian and military rulers. This must be terrible for the patient Sudanese people.

The Sudanese wonder continues when we look at the military coups caused by the Sudanese civilian governments, which have failed to respond to the expectations and national aspirations after the independence. 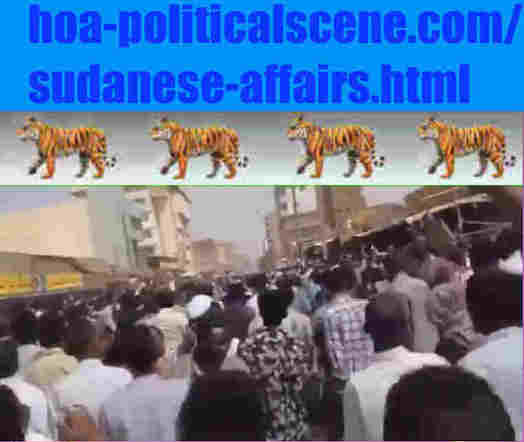 The leaders of the military coups, though are mostly from the middle class. But once they tasted the welfare of the power they seized, they have also been mesmerized by the power they have to get wealth, until the transformation overcome human nature.

This is because the army officers who staged the coup in 1989 were Muslim brothers.

They planned the policy of Islamization and Arabization of the comprehensive Sudanese society, regardless to the rich ethnicity and cultures it has.

They planned and launched the organization of Islamic militias and movements of Islamic mercenaries.

They distributed all these elements belonging to the organization of the Muslim Brotherhood in all regions of the Sudan, to manage the Sudanese affairs from each region, and to monitor the situation, and control any people's movement that rejects their policies to silence it.

Yes, the second dictator Jafar al Numeri has done that part of the Muslim Brothers' plans in Sudan, in September 1983. But, Numeri wasn't a pure Muslim Brother, although Hassan al-Turabi has deceived him to implement the Sharia Laws.

Did You Like What You Read about the Sudanese Affairs?

In addition to the SUDANESE AFFAIRS, you might also be interested in watching Sudanese affairs on documentary movies. You can watch that on documentary film at TVCinemaApp.com.

Comments on SUDANESE AFFAIRS appear on the section of the page below the comments form and above this paragraph. If you didn't comment, yet, please do that. Thanks.