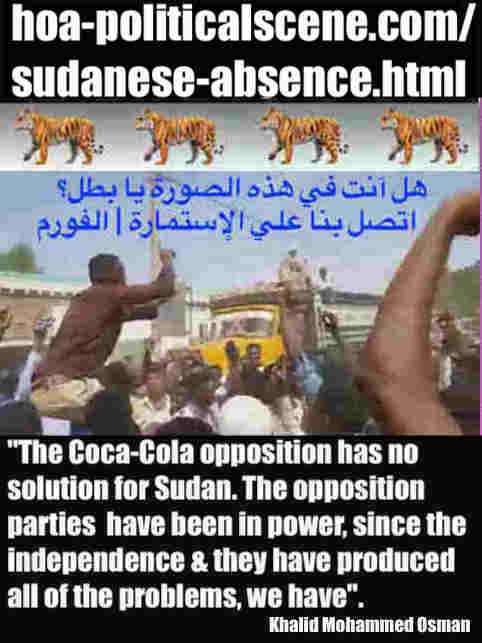 Achieving this victory is not only over the military religious regime, led by what's called the National Congress Party, with its criminal leader, Omar al Basher.

But, it should also be done to win the political struggle with the Sudanese political parties and what I described as the Sudanese sectarian parties, especially what's called the National Islamic Front (NIF), now part ot it is represented in the People's Conference Party pf Sudan.

Because all of these right wing parties have been the main causes of the political crises in Sudan, since its independent from Britain in 1956. They all have deteriorated the entire situations in Sudan because they are focusing on Arabizing and Islamizing Sudan, as if Sudan is infidel.

During the eighties I started the call to check out the Sudanese history and look deeper inside it to explore the political situations Sudan has come through and to reach this status of complete destruction.

During the nineties, I participated in a revolutionary armed struggle in hope that my beliefs and ideas could be useful to understand the political situations and the real causes of shifting the political system from democracy to dictatorship continuously every decade.

That's of course except for the long periods of dictatorship during Jafar al Numeri's reign and the last dictator, Omar al Basher.

Then I published many highlights taking my notes into this political matter in articles and in my book the "Horn Africas Political Tragedy" and on the HOA Political Scene to educate people revolutionary understanding to the political problems in Sudan and in the Horn of Africa and some other places.

It is a continuation to episode 1 at "Sudanese Abilities" and it continues in episode 3, the "Sudanese Abuse" and some other episodes. So, you might need to read episode 1, to continue here and then on episode 3.

From this, you understand the sequence, you are reading now, is composed in so many Sudanese political articles and Sudanese Arabic political articles, I and sincere HOA's readers write good, through the sections of "Readers Comment", "Readers Read Good" and "Readers Write Comments".

In fact we have more than 1,000 series in such political episodes, you might enjoy, not on Sudan only, but on all of the states in the Horn of Africa. After all, this is a Horn of Africa's Network.

The episodes in this special sequence of Sudanese insights are more than 200. For the rest of the episodes, see the navigation section at the bottom of the page. 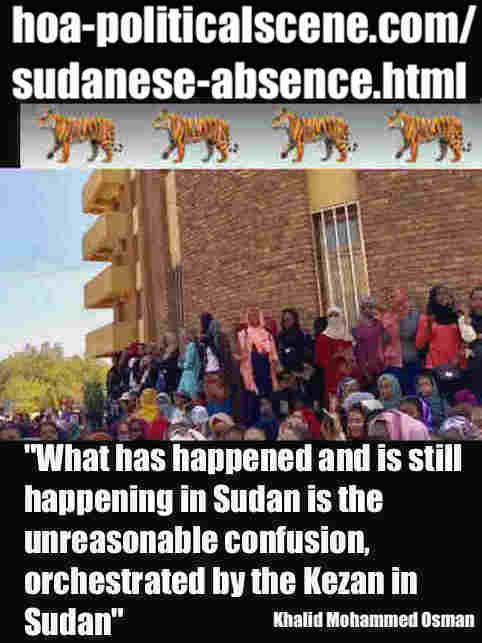 You ended at the "Sudanese Political Abilities" by reading the question: "Why not real democracy?"

This is to note that this political network comes well organized in alphabetical and numerical order.

That begins with the modern and secular education system. The British had put that system well, before they left the state of Sudan. The national governments, well... they are called "by that national thing"... have destroyed that education system.

So, you'll absolutely see through the "Sudanese Absence", and until recently, that memory, or mental absenteeism has been the real causes of unloading the Sudanese protests and the causes of the failure of all of the governments in Sudan, whether they are military governments, or civil governments.

Now, I follow the sequence, so do you, please? 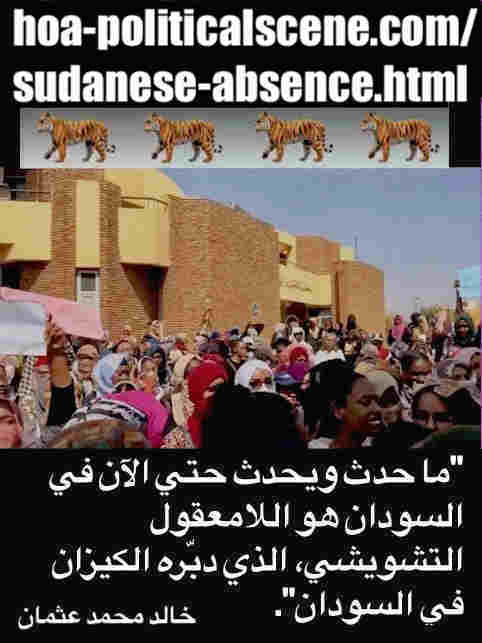 You ended at the linked page with this question too: So, what democracy is this?

"The Coca-Cola opposition has no solution for Sudan. The parties in this opposition have been in power, since the independence and they have produced all of the problems, we have".

Those parties of sects are similar to religious parties, such as the Muslim Brothers of Sudan.

To explain this further, I have written many articles, including articles titled as the following:

"Invitation to Comment 71: What's this, in Sudan? دا شنو دا في السودان?", to continue the article on Da Shino in Sudan.

"Invitation 1 HOAs Friends 152: Between the betrayal of the Sudanese people shared between the Muslim Brotherhood and the Umma Party and good citizenship بين خيانة الشعب السوداني المتقاسمة بين الأخوان المسلمين وحزب الأمة والمواطنة الصالحة"... This is a new article.

As for the Muslim Brothers branch in Sudan, especially the prior version of what's called the National Islamic Front (NIF), I have explained very well that all of the political deterioration in Sudan is because of thewritten about the "Conspiracy Theory" of this party.

The "Muslim Brothers Conspiracy Theory" rules Sudan since the foundation of this devil party in 1941.

I explained their policies, further, as they were at that time in an article titled "What has happened and is happening in Sudan is the unreasonable confusion, orchestrated by the Kezan in Sudan" at "Invitation 1 HOAs Friends 137: ما حدث ويحدث في السودان هو اللامعقول التشويشي، الذي دبّره الكيزان في السودان". 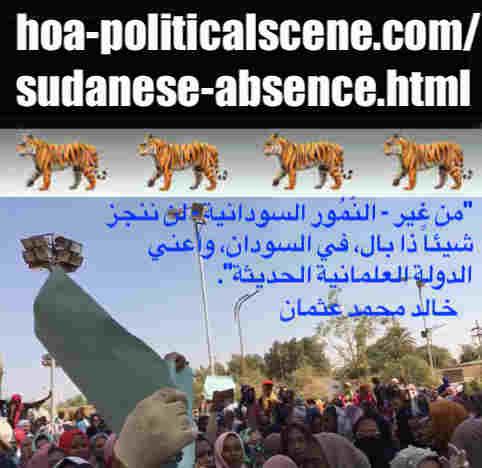 The Dilemma of Sudan are the Sects Parties!

The planned Sudanese policies by the sects have enabled the Muslim Brothers to function after the Sudanese Intifada in April 1985, although they have been working with the second dictator in the Sudan history, Jafar al Numeri to implement the Sharia Laws of 1983.

The Sudanese sectarian parties have helped them by feeding them by members, since the forties and afterwards. They also have been tricked by the devil party of the Muslim Brothers, although they know that the leader of the party was a fox... an expression of being fucking clever and master of manipulation.

They continued to help them when they regarded the party of the Muslim Brothers as a national party, although they know that, the party has foreign influence.

After that, during the eighties, they helped them by stopping to implement the convention of "protecting the intifada" against Numeri. The Sudanese absence of political sense to understand the demands of that period has caused the failure of what's called the third democracy in Sudan.

The Sudanese political parties should have implemented that convention to eliminate any political power that participated in the regime of the dictator Jafar al-Nimeiri, whatever it was.

So, forget about any claim that those parties are opposing the Muslim Brothers and don't be fooled.

The Muslim Brothers carried on their conspiracy by the help of the Sudanese Sectarian Parties and this is so clear to everyone who has eyes and a clear mind.

To fulfill their conspiracy, the Muslim Brothers of Sudan use what I described as the tactics of "octopus arms". They planned this by organizing themselves into shells of a kind of party that could be able to split and create such arms, when the main party faces any threats to resolve it.

When they began they had a different name. They changed that name three times in three decades to fit the demands of each decade.

This is an octopus arms' tactic, added to flashing the party every time, when they came to power through the 1989 coup. I wrote about it at Muslim Brothers' Octopus in Sudan.

But, not only the tactics they plan, the strategies are really devil strategies. They invested the Sudanese absemce of political sense to understand the problems of Sudan the setcs have in common to dismantle them from their power.

The sectarian parties have helped them not only by getting members from them, but by the same usage of Islam in the state and by implementing the policy of developing mental absenteeism

When they came to power by the coup in 1989, they knew that the objective conditions have matured, as they have planned. That's because they have already created Sudanese absence of political sense to understand what they plan for Sudan.

The leader of the Muslim Brothers has played all of this depending on his family relation with the prime minister in the government of what's called the third democracy in Sudan.

The Umma Party was in power, when the prime minister's brother in law plotted the army coup in 1989.

Are we, the Sudanese people stupid, or what?

Fuck this history, people and come with a real revolution that sets fire on it completely.

Begin your own history.

Have More to Say about the Sudanese Political Absence?

Did you like what you read through the Sudanese absence of comprehensive political sense?

If you have any different understanding to the Sudanese absence of comprehensive political sense, or just want to write comments on Sudan, or any political article on Sudan, you can do that easily here.

Use the Comments form to write your observation and political stories on the political scene in Sudan. That would be more of political inspiration for us, which could work as a political magic to inspire us to write more.

Some of what I have mentioned here on SUDANESE ABSENCE could be available on film documentary at TVCinemaApp.com.

Comment C2 Entries on Sudanese Absence appear at the section below the Sudanese Comments form and above this paragraph.