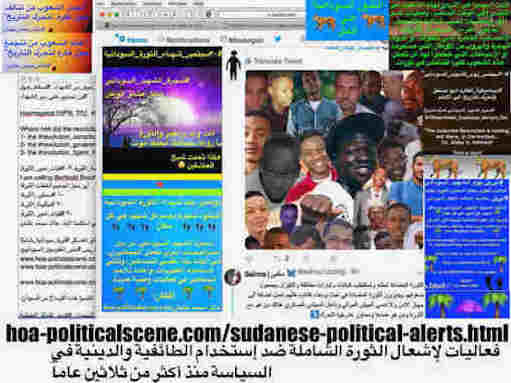 Well, this episode which is not numbered yet along with its Arabic version Sudanese Political Claims continues from the following episodes:

Undone numerically episode, like this one you are reading now titled Sudanese Weakness along with its Arabic version Sudanese Political Weakness.

It continues to another undone numerically episode titled Sudanese Indictment, along with its Arabic version Sudanese Political Indictment. 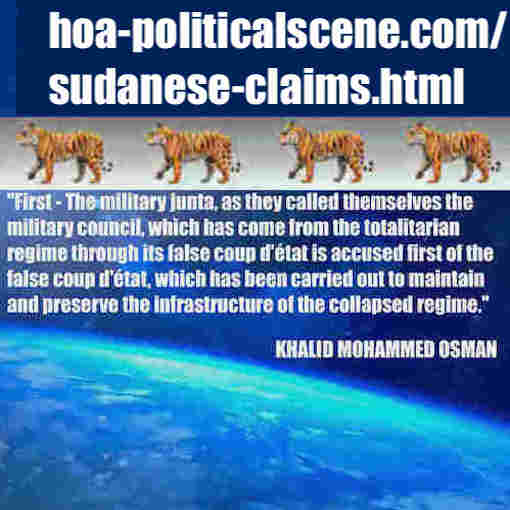 You read about the allegations against the military council that have emerged in Sudan from the military religious regime of the National Congress Party (NCP), which was led by the international criminal Omar al-Bashir who's wanted by the International Criminal Court (ICC) for crimes committed against humanity in Darfur, South Kordofan Sudan and other regions.

The indictment of senior officers and personnel of the regime and Omar al-Basher's indictment along with the arrest warrant issued to arrest Sudanese dictator are still to be considered seriously to bring this criminal and his mercenaries in the regime, including those in the military council to international justice to be treated for crimes against humanity. 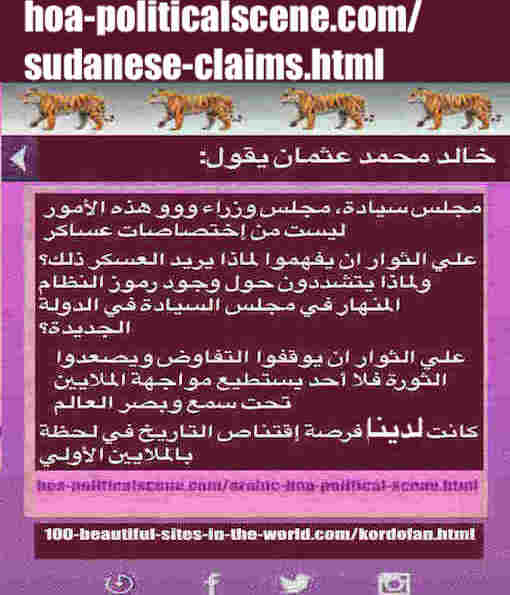 The Sudanese Claims continue against what's called the Transitional Military Council (TMC) in Sudan, as this council proves simply that it is the stupid council on earth ever. This is why many activists in the revolution think that it is like that and the stupidity is the trademark of the junta.

We do not make accusations or these descriptions randomly, because the (TMC) demonstrates that stupidity by its practices during the negotiations.

First, it is stupid because the members of this council know that the council is illegitimate, as they know there is no any military regime in the world that is legitimate. This is the first point of accusation and indictment. If they don't know the points I have mentioned here, then they are stupid once again.

They are stupid for the third time because, it is very easier for them to get into history, by responding positively to the wishes of the Sudanese people rising and by agreeing that the collapsed regime was the worst regime and apologizing form their part of sharing interests with that regime.

They never for example thought of a heroic appearance like that in front of the people gathering there to their well awareness and understanding and to speak to them, admit that they were wrong and they are willing to shift the power to the revolution completely.

The have the idea that the collapsed regime has deeper network of militias, security agents and conspiring affiliation with the leaders of some countries in the Arabian peninsula they could depend on to preserve the infrastructures of the collapsed regime.

So, they are stupid for the fourth time because they think that they could use the militias, security agents and conspiring affiliation with the leaders of some countries in the Arabian peninsula to hold fast in power and build upon the infrastructures the collapsed regime has left.

While seeing the wide spread of the Sudanese revolution and the million of people gathering and ready to sacrifice for their nation, all of that hasn't bought their attention to think wisely about the dangers they face and come to the right solution. So, they are demonstrating this unprecedented stupidity for the fifth time.

Through this Sudanese Indictment against the Sudanese Transitional Military Council (TMC) I can count numerous kinds of stupidity. But, this is enough.

We move now to Sudanese indictment, or just a sort of allegations and claims against the Sudanese uprising and those who are leading the negotiations.

I personally have many doubts of them from the way they led the negotiations. I am doubting their intelligence and their measures of evaluation. 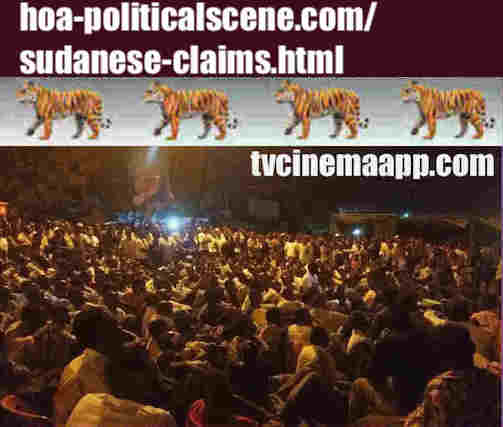 Sudanese Claims in the Framework of the Sudanese Revolution!

In fact there are no Sudanese Claims for the revolution, but rather accusations to the leading teams of the negotiators with the Sudanese Transitional Military Council (STMC).

However, there's a critique to the Sudanese revolution and the activists who ran it in the social media and prepared it through the zones and zobas committees.

While most of the activists and participants in the revolution have chosen this peaceful approach, which is still persisting, the enemies, including the Sudanese Transitional Military Council (TMC) and the Rapid Support Forces move fast to achieve complete plots against the revolution.

The leader of the Rapid Support Forces started some tours to the eastern Sudan and other places to get more forces to his own army and he flew to Saudi Arabia to agree with the Saudi leadership conspiring against Sudan, and to get advice from them about what to do.

So, just thinking this peaceful way from the part of the revolution in this very dangerous moment isn't that wise. We can not continue a peaceful revolution with the bad development of all these circumstances, while the Transitional Military Council seeks to disrupt the implementation of the demands of the revolution, and while the Vice-President of the Council is seeking to get troops to recruit in his forces parallel to the army.

As long as the Transitional Military Council (TMC) is illegitimate, and the military regime from which it was originated was illegitimate, it means that it does not deserve to have any negotiations with it by any opposition such as the Freedom and change group and the Alliance of Sudanese Professionals.

In this regard and before the appearance of the (TMC), I suggested that the masses should not be moved in any revolution against the regime before we agree on three crucial mechanisms.

I explained the need not to move the street in this Sudanese revolution, before we agree in the various groups of revolution on the basis of functional dynamics, and on the completion of three mechanisms, namely the Constitution of the Revolution, the government of the revolution and the Tigers forces of the revolution (ANNUMOR ALSUDANYAH).

Then after that we shall come to moving the street. If our groups in the Sudanese revolution absorbed these mechanisms and implemented them accurately, the revolution would have taken over the administration directly, and that means we wouldn't have to need any illegitimate military council to hold negotiations with it.

In the absence of leadership composed of leaders with long political experiences, it is clear that any negotiation with the TMC gives its leaders legitimacy that they lack completely. The Sudanese political accusations that the Council faces in this context are related to the manner in which this Council plays tricks against the revolution.

It exploits the immaturity of the revolutionary actors negotiating with it, and maneuvers to gain time and plans actions behind the scenes to strike the Sudanese revolution from within and from abroad.

It seeks recognition and support from Arab leaders in the region who are already plotters against Sudan, supported Omar al-Bashir before to destruct Sudan and sell its productive schemes to them and provide them by mercenaries.

It uses the mercenaries of the collapsed regime, whose leader is trying to find a position for himself in these new circumstances, which they did not expect to explode in such an amazing and spectacular way with all its heroic daily details in the Sudanese revolution.

However, despite these numerous accusations and the seriousness of these threats to the safety of Sudan, the comprehensive revolution has become the lung that the country breathes through in the current circumstances, despite the difficulty of the road.

With the continuation of the method of revolutionary escalation alone, with the advent of crucial critical mechanisms, this comprehensive popular revolution can prevail, and then there is no way for the traitors at home to escape.

Neither the mercenaries at home, nor those dealers abroad who exploit the calamities of the people and deal with thieves like them in the Sudanese totalitarian authorities will rest.

We can export the revolution to their lands to make them taste the pain of miseries they have done for others.

Sudanese Claims Connection with Other Episodes in the Sequence!

Did You Fail to Analyze SUDANESE POLITICAL CLAIMS?

Write comments on SUDANESE CLAIMS through the following comments form. Thank you.

You can also attach pictures with what you write, and record your email on a secure page to receive alerts when anyone comments on what you wrote.

You can watch Sudanese documentaries including reportages on Sudanese Claims on documentary film at TVCinemaApp.com.

Comment C2 Entries on Sudanese Claims appear on the section of the page below the comments form and above this paragraph.