HOA Says Khartoum Has No Secrets!

Last reports from Khartoum, the capital city of Sudan urge that the level of security is alerting 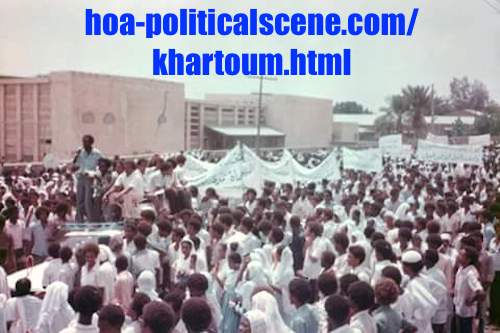 hoa-politicalscene.com/khartoum.html - A view from April uprising on the streets of the capital of Sudan. Yes, it was that uprising which has turned into false revolution.

What you are going to read here is old. It becomes history now and this page turns to be an archive. However, it included some updates that appear automatically below the comments form and you can get them easily.

This is obvious, as long as visitors add commentaries, or write updates about the topic through that form.

Well, I updated it recently, although the following lines about this story are somewhat old.

According to HOA's observation, personal security is in danger in Sudan, while the security of the state begins to threat people.

Sudanese security forces are not Sudanese any more, as they have no any Sudanese traditional morals. They don't have any Sudanese consciousness, either.

They are security forces made by those military and religious dictators through the late military religious regime to threat the Sudanese people, abduct activists and ban the press and other national media. 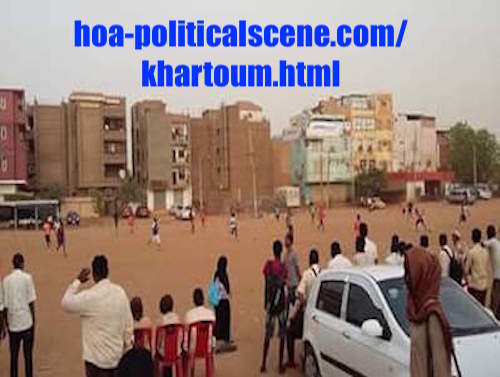 hoa-politicalscene.com/khartoum.html - Khartoum knows no secrets! even when football leagues play on the new suburbs.

It is that clear in this age of modern democracies in the 21st century, Sudanese people still lack freedom. In spite of the peace agreements signed with different rebel groups in the country, including the comprehensive peace agreement all endeavours to bring in real democracy in Sudan were a dream.

There is no legality even to those who are ruling now forget about the legality of their security forces. However, Sudanese people are stuck, because all of the mechanisms to uprising movements have stopped to work.

The following reports are clear proof that people of Sudan are under continuous dangers because of their political attitudes against the the Sudanese dictatorial regimes.

Read some reports from Khartoum the capital city of Sudan, or write some reports to help Sudanese people rise for democracy. If you have some reports, or if you have heard about such stories, please use the comment C2 entries form at the bottom of the page to bring them in here.

The security forces took the abducted to an unknown location.

News says the security forces kidnapped Abdul Majid Saleh while he was on his way to meet with some Fur girls victims of rape, in 2008 to follow up their cases.

Abdul-Majid is member of the Political Council of United Democratic Liberal Party, Deputy Head of Foreign Relations, one of the founders and leaders of the Darfur Democratic Forum, president of Youth for Peace, one of the most active people in the field of human rights and supporter of Fur in the Sudanese capital. Reports say no one knows why the victims kidnapped or where the security forces held them.

Thanks for sharing any reports from Khartoum.

You can support human rights in Sudan by sharing this page too with your services through the buttons at the top of the page and here below the comments form.

The Site Build It Tools below empower this page about human abuses in the capital of Sudan. You can use them to empower any idea in your mind and build it a web business here.