The Sudanese Administration failure causes the continuing deterioration in the Sudan. The failure of the Sudanese ruling elites, whether they are civilians, or militants have even divided Sudan into 2 (Sudans).

You, whether you are just readers, journalists, researchers, or students of political sciences, see what you have access to. This will be your source of a new generation of aesthetic political analyses. 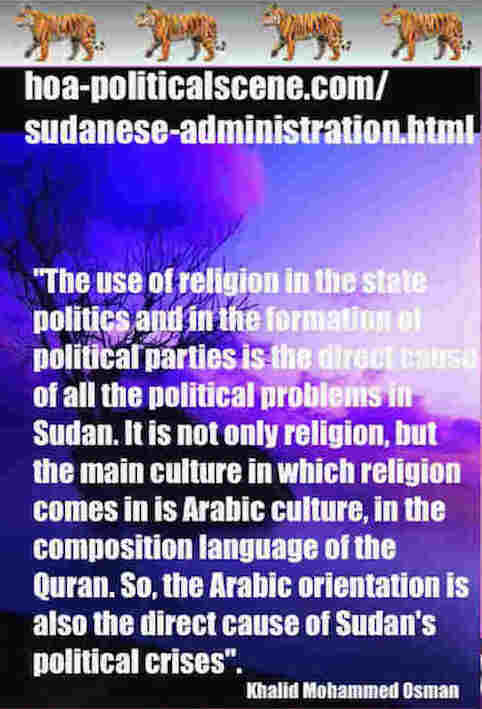 The sequence has more than 200 episodes, alphabetically and numerically arranged in order to have good reading experiences on the HOA Political Scene Network.

The Failure of the Sudanese Administration of the Ruling Elites!

It just doesn't make sense that the Sudanese activities of the masses were and are against the Sudanese dictatorial regimes led by officers in the Sudanese military through their coups.

The Sudanese people have never protested against the Sudanese political elites in what's called democratic governments, although they know very well that the political parties in the power have exploited them badly and orchestrated the political absenteeism of the Sudanese mentalities by brainwashing the people by the use of religion in politics and culture.

Therefore, all of what I have analyzed come in the political episodes of the HOA Political Scene Blog to illustrate the causes of political failure in Sudan, and to ordinate the logical solutions required to address the deterioration in Sudan and achieve a true presence of a new Sudan as a secular, democratic, united and modern state.

The discovery of the causes of the political crises in the Sudan takes place in view of the different roles played by the political parties that ruled the Sudan after the independence and orchestrated the administrational system of the Sudan.

I am analyzing all of that since the day Jafar al-Nimeiri came up with his coup d'état on May 25, 1969 and turned a backward political shift from the center left to the extreme right. In direct involvement, I criticized the policy of the regime in the face of the Minister of Culture and fled to Iraq.

The main features of the failure of the Sudanese parties in the administration of the country are that they are religious parties by nature and they will remain to be so, as long as they are controlled by religious sects.

The use of religion in the state politics and in the formation of political parties is the direct cause of all the political problems in Sudan. It is not only religion, but the main culture in which religion comes in is Arabic culture, in the composition language of the Quran. So, the Arabic orientation is also the direct cause of Sudan's political crises.

By asking why, it can be explained by that the nature of Sudan's demographic composition is not purely Arab in nature. The Sudan is composed of many ethnicities, diverse cultures, diverse traditions and diverse faiths. Therefore, the use of religion and Arabism has been a direct cause of deterioration at all levels.

This is similar to using the "divide-and-conquer", or "divide-to-rule" method. It is the same style. The Sudanese political parties, however, had failed to do so, as they had paved the way for such a backward manner of military coups d'état in the Sudan.

Although it is the policies of these Sudanese parties that have led to three military coups in the Sudan since the independence, these political parties were pleased with those coups d'état.

The military coups were giving those right-wing parties a breathtaking opportunity, and grouping their ranks to the forefront of the political struggle, to return again to power, not by their own activities, but by the activities of the masses of the Sudanese people who come to be defeated every time. Oh, hell

The proof is that we see here that a number of these parties took part in the military governments during the periods of the Sudanese dictatorial regimes.

To this moment during the dictatorship of the regime of Omar al-Basher, the Sudanese parties have exercised this role by participating in the military regime and by continuing to engage in dialogue with the regime.

This is not the only evidence, as these parties are still asserting the existence of a kind of political contract between them and the military, They do this because of their fear of the progress of the masses in their modern movement.

It has to be made clearer. I the Sudanese journalist Khalid Mohammed Osman, am always ready to do such kind of political analytics, using semantic dialogue in this context.

Follow this political enlightenment on the page of the Sudanese Advantages, episode number 8 in the sequence of Sudanese articles. 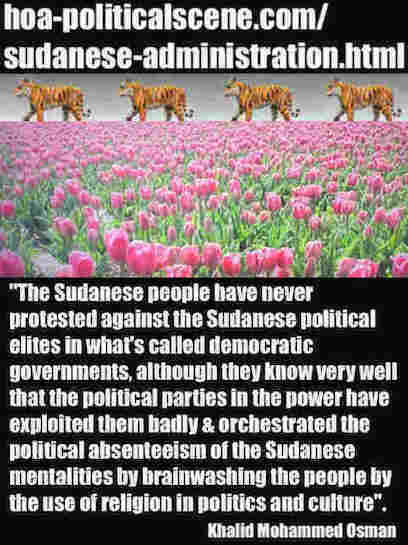 The policy of burning the political stages in Sudan and burning the sectarian parties with it, as I have mentioned earlier, has been succeeded dramatically to bring Sudan into chaos and continuing disasters.

It made it two Sudan(s), when for the sake of implementing the Sharia Laws, the ruling National Congress Party have plotted to isolate the Sudanese opposition in Asmara and Addis Ababa and break it.

The regime did that by attracting the Sudan's People Liberation Movement (SPLM) to sign a secession agreement with it named as Comprehensive Peace Agreement, which is in fact illegitimate.

No one has ever mentioned this fact during that time, even before signing the secession agreement, but only I am, the Sudanese journalist Khalid Mohammed Osman.

Everything about the policy of burning the political stages is in fact the real tragedy we have in Sudan and that tragedy has been planned for the entire country to face such political problems continuously.

We need a common sense together. Not only that, but we need to have different mentalities to look into such issue. That will never happen, if we still have faith on such parties. 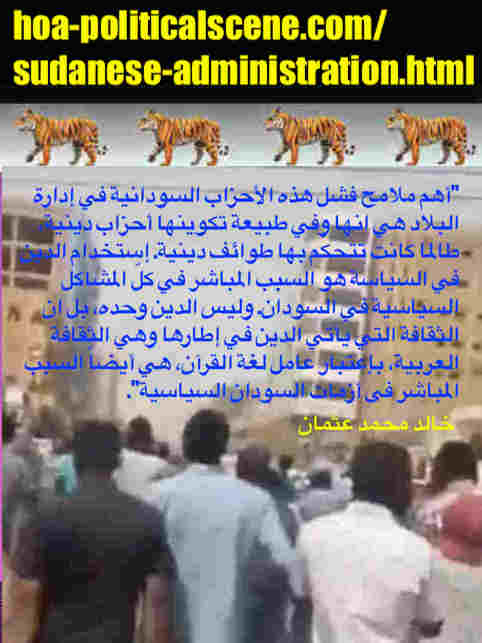 * Sequence 1, Episode 7: Sudanese Administration: Are You Intellectual 8: "Let Me Die with My Enemies" is a Reckless Policy of the Sudan's Dictatorial Regime: عليّ وعلي أعدائي سياسة متهورة لنظام السودان الديكتاتوري

The dictatorial regime implements the method of "Let Me Die with My Enemies", whenever it comes into crossroads to face political opponents, or angry demonstrating Sudanese people, or even those people demanding the surrender of the regime's criminals to the International Criminal Court (ICC).

So, the regime practices this method, carefully, by getting the impression of everything out. The leader of the regime is not Samson, though.

He played so, when the ICC issued the arrest warrant to get him to the court. See Omar al Basher's indictment.

When Samson lost his power and then he couldn't find any solution to his situation, he used all the might left on him to push the pillars of the temple to destroy it, and to die with his enemies there inside the temple. He said that phrase.

The Sudanese regime of Omar al Bashir, which is accused of crimes against humanity, internationally and considered the worst of the other Sudanese dictatorial regimes, interiorly comes to such stupid solution because it knows that the people might believe the craziness of the regime and retrain.

But, unfortunately, they won't. So, the regime keeps on pushing its security agents to do the dirty work against the peacefully demonstrating people during the Sudanese rising.

Until the recent Sudanese uprising, which has started in last December and continued until this moment with un presented public persistence, the regime's security agents bomb the Sudanese people in the Sudanese revolution, kill them during the Sudanese intifada, imprison many of them and torture them to death in detention houses.

However, the Sudanese protests continue. The people are determinant this time and they are demanding this bloody regime to step down and to pave the way for democratic bodies in the Sudanese revolution to take over to create a new Sudan.

Nevertheless, many public characters from the Sudanese political parties are now awake to share and take advantages of such transmission. This is an act that should never be accepted, because the Sudanese sectarian parties are the real cause of all of the political problems in Sudan.

They had been in power, once and they proved to lack any sense of ruling this state. They don't have any good solution plan to the political problems in Sudan, which they have created.

They are part of the misery and part of the Sudanese octopus policy and disruption of the history movement. Not only that, but they are in fact part of the catastrophe in Sudan. 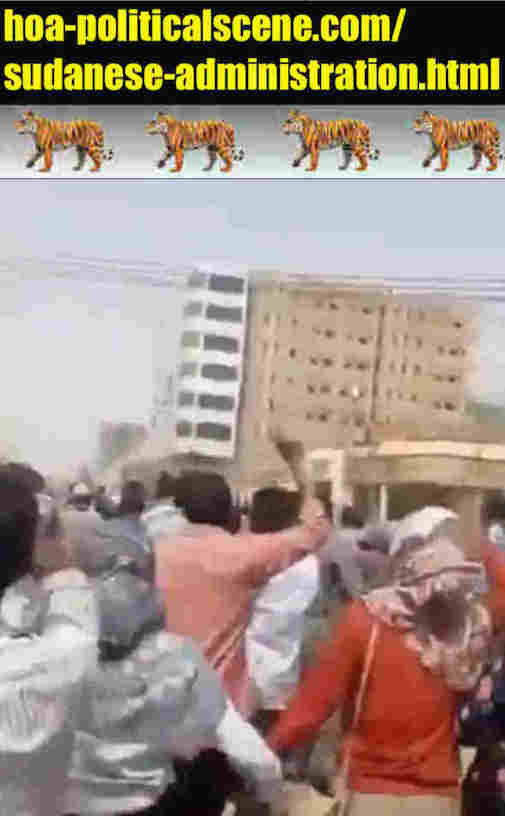 Think the Sudanese Administration is Outstanding?

Did you find the Sudanese Administration outstanding?

Use the Comment C2 Entries form to comment, or to write about Sudan. Your comments on Sudan will add values to the "Sudanese Forum" platform and improve the Sudanese political scene.

In addition to Sudanese Administration and the Sudanese issues you read, you might also be interested in some documentary movies about Sudan. You can watch all of that on documentary film at TVCinemaApp.com.