The Sudanese Aggression on politics has occurred when some Sudanese people formed political parties on the grounds of religion and sectarianism, which are not political grounds.

Such aggression on politics in Sudan has been concentrated in the formation of political parties on the grounds of religion and sectarianism، since the independence of the Sudan from Britain in 1956.

This has produced political parties based on religion and sectarianism. We call parties of this type religious parties and sectarian parties. 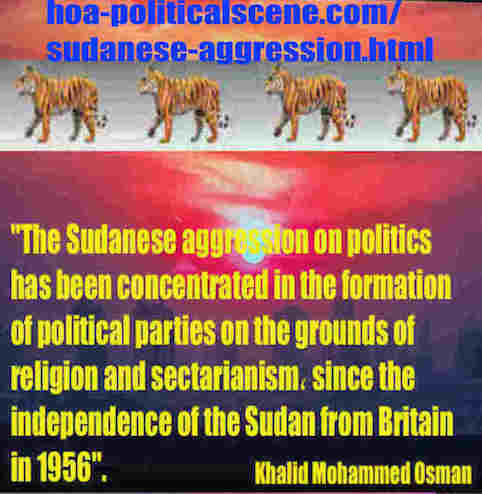 The Sudanese political aggression I analyze here continues from other pages on the Sudanese Political Section of the Horn of Africa's Network. It is one of more than 200 episodes in a Sudanese sequence of political articles.

The following introduction connects you with some other episodes with connection to this page, so you will know where this article about the Sudanese Aggression has started and where it ends. 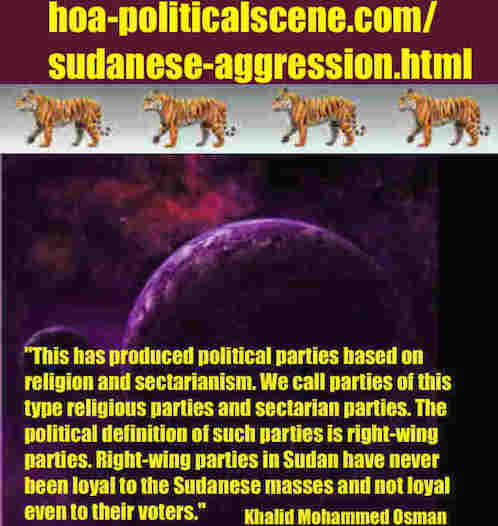 The political formation of religious parties and sectarian parties has not produced only turmoil, but also all the political problems in the Sudan.

We see today that the political problems have evolved to confront Sudan with political arrogance, political turmoil, political misery, and political crisis, such as Darfur crisis.

In fact, there are similar crises in all of the Sudanese regions, where the Sudanese people are dying by thousands, or fleeing thier regions. All of this has evolved, entirely to disintegrate Sudan and inflict disaster on its people.

It is not the injustice, oppression, persecution and all of that, which has inflicted upon the Sudanese people since the independence alone, and not the civil wars that have torn the Sudanese territories and led to the secession of the South Sudan alone.

What is important here is that these Sudanese religious parties and Sudanese sectarian parties have failed to manage the Sudan since the independence and they have contributed to the dismantling of the country and contributed to the long-term Sudanese misery.

Although some leaders in these sectarian and religious parties have begun to recognize their role in the political failure in Sudan, they are trying to exist even through the Sudanese revolution, which continues to this day, to find a place in the Sudanese political future, in an attempt that the people should be aware of.

This is the reason to alert the masses to take care of such attempts and to be vigilant. It is so important to secure the revolution and democracy by working very hard to insure that these right-wing parties never return to power again. 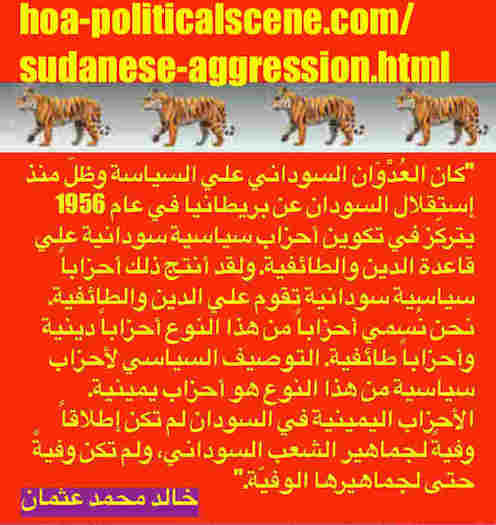 As part of the Sudanese aggression on politics, these political parties cannot do anything to Sudan, as long as they have failed to do so while leading the Sudan.

They ruled in governments that have been falsely labeled as democratic governments, although they have humiliated the people and they were fraud to the term of democracy.

In addition, the right-wing parties have caused the three coups in Sudan's history, such as the coup of Ibrahim Abboud in 1958, the coup of Jaafar al-Nimeiri coup in 1969, and the coup of Omar al-Bashir in 1989.

Not only that, but these sectarian and religious parties have been working with the regime of Omar al-Basher and maneuvering with it to return to political life and to power again in any way.

That means, they are always ready to sacrifice the Sudanese people for their own interests.

It is not only the failure, but the Sudanese religious parties and the Sudanese sectarian parties have always sought to preserve their gains in power and wealth.

According to this economical interest of the class they represent, they are working to support the Sudanese capitalist sectors from their constituents, and to support their supporters who use them and those who benefit from their presence in power.

The rest of the people have always been plagued with misery and hardship through the long political periods in which their administration of the Sudan took place in three periods, once dominated by the National Unionist Party, which changed its name to the Democratic Unionist Party, once the Umma Party. 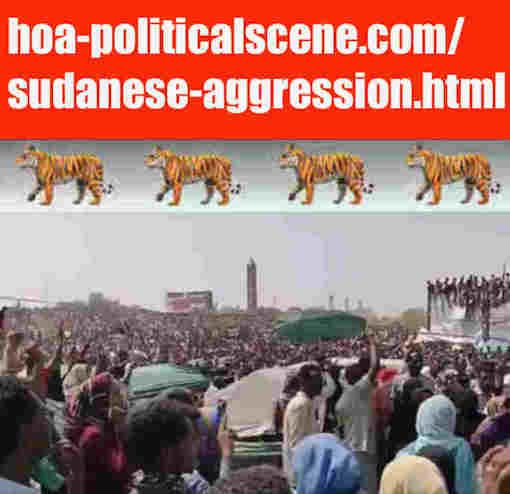 The Sudanese Aggression on the Ansar and Khatmiyya Sects!

On the basis of this sectarian division, these two Sudanese sectarian parties were benefiting the Ansar and Al-Khatmiyya sects. Even in this regard, they did not benefit the entire sectarian groups they represent, but rather the capitalist sectors of these two sects.

So, even the economical and Econo-political term of "capitalism" has been misused by these parties and proved to be working for the rich class of the two sects. This is a discrimination from within too, regarding the poor masses of the two sects.

If we look at the division of wealth and power, we find that the groups benefiting from power and wealth were the capitalist sectors of these two sects, while the masses of these two sects remained poor and remained in the framework of the Sudanese aggression on politics.

How Did You Find the Sudanese Aggression on the People's Life?

Your comments on the Sudanese Online platform here enrich the entire network. You can even instruct us to build a page by your full name to include it on this network. Why not support a veteran proletarian like you, to support you?

Comment C2 Entries on SUDANESE AGGRESSION appear on the section of the page below the comments form. If you didn't comment, please do. Thanks.