Sudanese Activities in the Framework of People's Protests!

There are many reasons for the failure of the Sudanese people in their political activities to overthrow the Sudanese dictatorial regimes and lay the right way for the new democratic, secular and united state.

Speaking about the reasons of the continuous failure of the people is from one side. From another side, there are also reasons for the failure of the political activities of what's called national governments since the Independence Day.

Both of the failure, whether in the people's sectors, or the formal sector, is ongoing political crisis in Sudan. 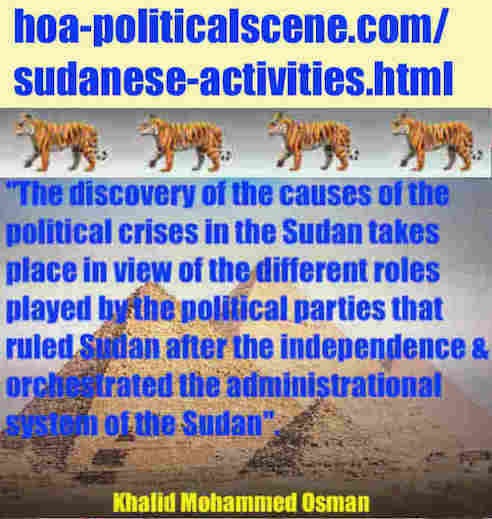 This means that all of the Sudanese political movements have failed in their attempts to overthrow the regime of the so-called Sudanese National Congress Party, which is define by me according to my own vocabulary, as a religious military regime.

Many of the readers read good between the lines of articles in the HOA Political Scene, so for that reason readers write good insights about the Sudanese political issues.

Readers comment, actually when they read insightful articles.This is why readers write good comments. Their articles and comments build the Arabic HOA Political Scene, which stands out to make the Arabic HOA very rich resource of political Sudanese analyses.

So, you loyal reader understand that the sequence of the Sudanese articles and commentaries is composed of many episodes. There are in fact more than 200 episodes in this sequence alone.

I am working constantly to furniture the lay out of the Horn Africas Network in order of alphabetical and numerical episodes in many sequences for the other states in the Horn of Africa to make the organization of the HOA network better online place for you to experience a good order of reading.

I am the Sudanese journalist Khaled Mohamed Osman and I wrote the whole of this political analysis of contemporary Sudanese issues. I say what I believe right. 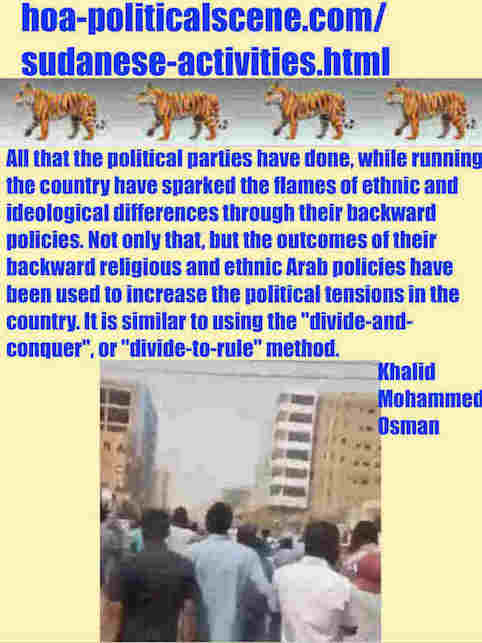 The Failure of the Sudanese Activities to Expel the Totalitarian Regime!

There is always a reason for failure in any field of expertise... and sometimes combined reasons.

A method can become a module, in which it can be encapsolated.

* The idea is not only, or should not only be the overthrow of this dictatorial regime, because it is the only system that's responsible of the deterioration of the Sudan.

* The method should not only be in peaceful demonstrations, which is declared and executed to lead to failure, with great stupidity.

I don't take your pardon for that, because I have the mindset of half a century of experienes to read and understand what's going on very good... and yes, I am really angry of the misconduct of the revolution, as any sincere Sudanese national could be.

Let's analyze the vocabulary of "idea" and "method".

Firstly, the idea of eliminating the Sudanese military religious system alone is not correct.

Because it is not only the totalitarian regime that is responsible for the Sudan's political, economical, health, social, educational, cultural, etc... problems.

# I hope that this important point of view is properly understood and that we do not have any demagoguery in our mentalities to prevent us from understanding what I am saying.

The military coups have taken place because all these political problems have reached their peak, or climax. These military coups were designed to correct the overall Sudanese situation and to devise appropriate solutions to all those problems. Any political analyst must be very honest in this regard.

Yes, we understand very well what political power does in non-loyal and non-honest and non-inclined national Sudanese people.

They have therefore forgotten the reason for their military coups, which is to address the problems of the Sudan and to modernize and develop its immense potential.

Thus, all the Sudanese events have been confined and concentrated in obtaining the wealth of the country and all the concessions for themselves, their families and all the acquaintances who are benefiting, from the beneficiaries and opportunists.

These personal ambitions in power and wealth have exacerbated all Sudanese problems. Nevertheless, all these outcomes have led to more systematic looting of the country's wealth.

Not only that, but they opened the Sudanese gate to the participation of those who cooperate with the military regime from the neighbouring countries to continue the looting of the Sudan.

Of course, we know the ambitions of some of the characters in neighboring countries that do not want good for Sudan, becuase they don't have what Sudan has in million square miles of natural resources.

We know that some of these people have become happy of what has happened to Sudan, with all that it has in million square miles of natural resources and the Sudan cannot make any use of them.

As evidenced by the fact that the totalitarian regime did not begin those Sudanese problems, although it has contributed to their exacerbation, we find that the political powers in the so called democratic governments have caused the problems of the Sudan.

Any political analyst should know this by reading the history of the periods in which these political parties have ruled the Sudan, to see what they have done politically, economically, socially and culturally.

Any sincere analyst will know what these political parties have been doing even for their members, whom we know that they represent a large part of the Sudanese people.

The analyst will know here how they were confined to the coronation of their leaders, who have no other than the negative cultural influence in their members and who harness them to serve the interests of the narrow-minded partisan leaderships, which led by unscrupulous humans, with purely personal interests.

To know more about all that I said in the last paragraph please finish reading about the method of the Sudanese Activities and then continue at episode 7, Sudanese Administration. 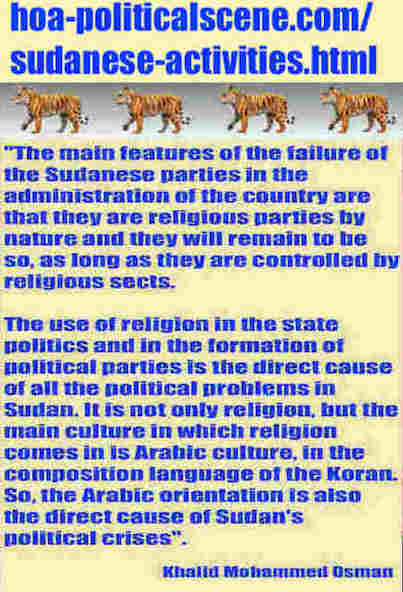 The method I am speaking about for a long time to take in the Sudanese activities against the regime is actually a curriculum, or so it should be in this regard.

As long as it is a method it is also a system, or it can have a system. I am very interested in the way the vocabulary exchanges its moral functions between these 3 terms. This is my specialty as a journalist and writer.

The right approach is always the one that leads to the success of any work done to accomplish anything. Even the simplest things have an approach to play. For example, even cooking food has an approach and has its own system, so that tasty food matures properly.

The Sudanese activities through the popular uprisings have lasted for a very long time, almost 30 years, and none of these Sudanese national attempts have succeeded.

In my own perspective, there is a method that can be distinctive and useful in achieving a decisive victory on the Sudanese totalitarian regime. It is not only to triumph over the dictatorial regime, but to secure the best systematic methods, so that the Sudan does not return to its old political situation.

This method that I am talking about is an integrated approach within the framework of an integrated programme for the accomplishment of the civil, secular, modern and democratic state.

It is available only to members of the group "Sudanese Tigers / Annumor AlSudanyah" and to those who join it from loyal Sudanese who believe in everything I say in the analysis of the Sudanese situation.

Continue this particular thread of analyzing at Sudanese Political Administration. But, please do that when you complete reading the Sudanese Activities and commenting on the topic. 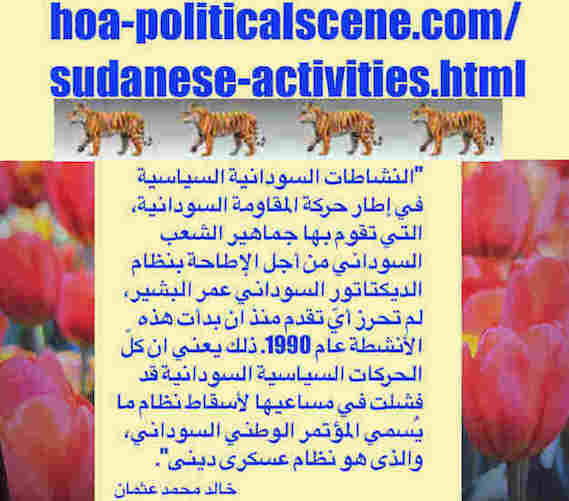 What Do You Think of the Sudanese Political Activities?

Did you find the SUDANESE ACTIVITIES outstanding?

Use the Comment C2 Entries form to comment on the Sudanese activities, or to write about Sudan. I value your comments on Sudan as they will add values to the "Sudanese Online" platform.

In addition to Sudanese activities and the other Sudanese issues you read, you might be interested in some documentary movies about Sudan. You can watch all of that on documentary film at TVCinemaApp.com.

Comments on Sudanese activities, or new entries on Sudanese issues appear at the political section of the page below the comment form. If you didn't comment, or write about any issue in Sudan, please do that now. Thanks.