The Sudanese intrigues, especially the Sudanese Political Intrigues, have contributed to the deterioration of Sudan politically, economically, scientifically, culturally and socially since Sudan gained independence from Britain in 1956.

Arabic readers, please scroll downstairs to the Arabic section of the page below the English version and don't forget to comment and share the page. Thank you. 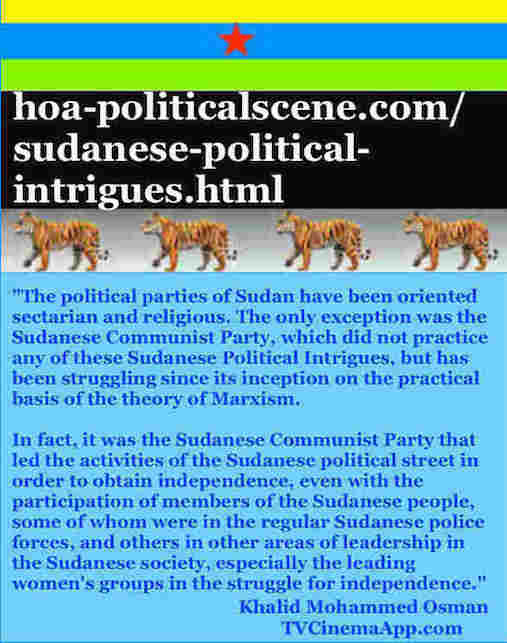 These political intrigues have been made by political parties, especially the religious and sectarian parties and they have continued to hurt Sudan very much, endanger it and destroy its stability.

It is surprising, and so far, to me, at the very least, that these Sudanese intrigues began politically in the history of Sudan and then turned to affect the society. The society has never known such intrigues, before the religious and sectarian parties practiced them.

The Sudanese Political Intrigues During the Independence!

The first gesture of Sudanese Political Intrigues, which has not been discovered until very recently, is that the leaders of the sects of the Khatamiya and Ansar conspired to obtain their political power after they negotiated with Britain for independence. Britain granted independence to Sudan based on what was agreed upon with the British colonial authorities, and that was to have Sudan ruled by its sons.

Of course this meant that the Sudan has to be managed sectarianly for the benefits of the leaders of the two communities. It also means the administration of the Sudan became sectarian, instead of colonial and thus religious. Sudan has inherited all the political problems that have emerged since then to affect it and produce all the deterioration that Sudan has been witnessing since its independence.

The political parties of Sudan have been oriented sectarian and religious. The only exception was the Sudanese Communist Party, which did not practice in any of these Sudanese Political Intrigues, but has been struggling since its inception on the practical basis of the theory of Marxism. 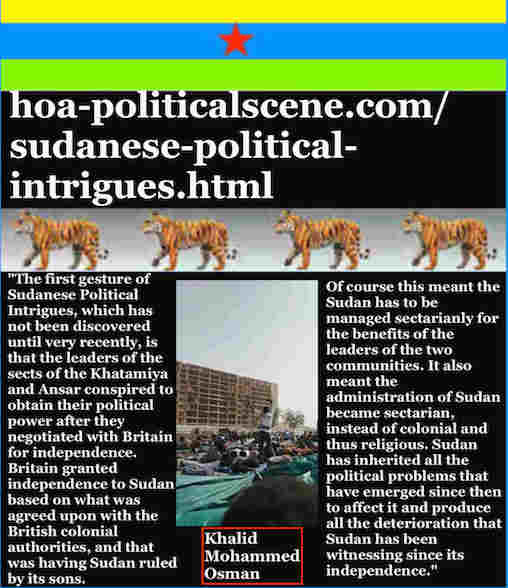 As the world realized at the time the emergence of communist political parties in colonial countries in the Middle East and Africa, as well as the growing influence of these communist parties to lead the stages of independence, and was aware of the emergence of Muslim Brotherhood parties at the same time, the imperialist forces preferred to deal with parties of backwardness such as the religious and sectarian parties.

This is an indication of religious convergence, especially since there was a communist party led by socialist intellectuals who have popular beliefs that might find huge acceptance from the masses because they work for the masses and do not celebrate the Islamic faith in political affairs. 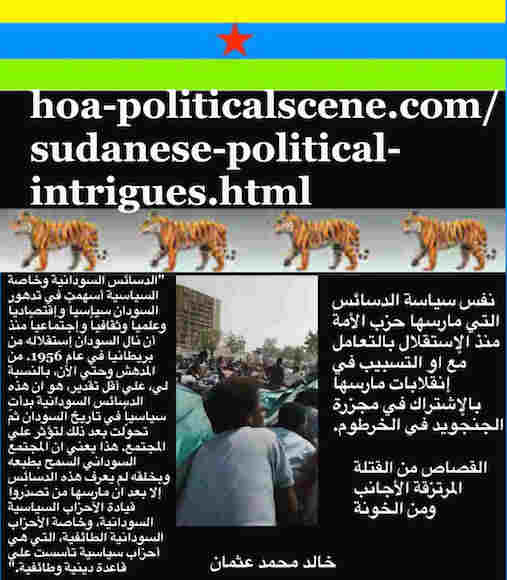 The Sudanese Political Intrigues in the Framework of Religious & Sectarian Parties!

This was the third indicator at the beginning of the Sudanese Political Intrigues among these politically and intellectually backward parties.

They continued working on the popular dependence of the two sects emotionally by the influence of religion and the policy of absenting the Sudanese political mentality to achieve many sectarian loyalties among the Sudanese people.

In this way, the political affairs have shifted from public state affairs for the masses to the interests of the first big families whose members control these parties. All Sudanese policy has been directed to serve three families in Sudan through all of the political periods that have passed through the country.

In lights of this political indicator, the Sudanese Political Intrigues continued between the underdeveloped parties to work always to control the course of the Sudanese policy and to work on beating the Sudanese Communist Party, or cracking its wings. 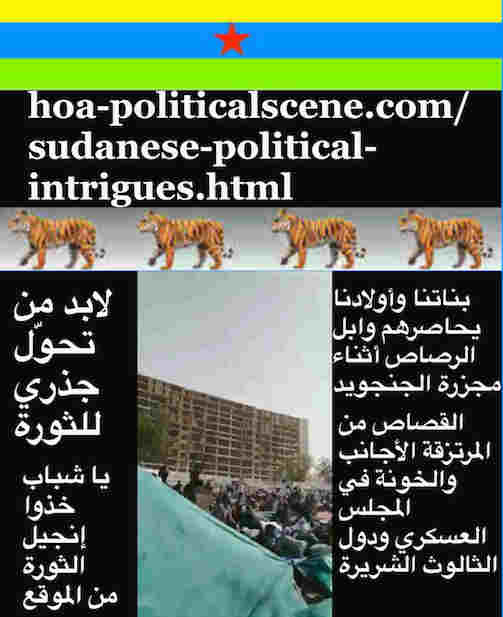 Sudanese Political Intrigues to Distort the Image of Communist Party!

The Sudanese Political Intrigues are many in this regard, but the most important is to distort the image of the Communist Party in the minds of the Sudanese people by saying that it is an atheist party. They knew that this claim in a society that expresses Muslim beliefs has a significant impact that is negatively reflecting on the Sudanese Communist Party.

In lights of the indicators that I spoke about in terms of the Sudanese machinations carried out by these right-wing parties, the beating of the Communist Party was not the only planned policy against this leftist progressive party. The general political orientation was the making of political mentality absenteeism among the public to affect the Sudanese people by political ignorance, and so far for as long as possible.

Here, if you have lived in those periods, you will see how large sections of the Sudanese society in various regions of the Sudan have been fully loyal to the leaders of the sectarian parties. Even the poor people have used to pay vows to the mottos of the masters and the ladies from the long-lasting fatigue of their livelihood. Some of them were working in the service of gentlemen in their homes and fiefdoms.

How the Muslim Brothers Developed the Sudanese Political Intrigues?

That Sudanese human misery was accompanied by the policy of the absence of the Sudanese political mindset, which has been working to keep the masses in this framework of political ignorance to serve the interests of sectarian feudalists. The Muslim Brotherhood took the gauntlet to walk the people on the path of the same policy of mental disorientation by using the same Islamic claims, which were still cheating some of the masses.

The first aspect was directed towards the masses to contribute with sectarianism in the absenteeism of political mentality. The second perpetrated to use the same policy to strike the sectarian parties, by indicating that the Muslim Brothers Party is the only one that cares about Islam, because as it claimed to be non-sectarian.

In addition, the Muslim Brotherhood Party outweighs the sectarian parties in using the Sudanese Political Intrigues to create the party's octopus arms at every stage, in every decade to implement part of its policies at that stage. In other words, it has used political pragmatism to prevail over those political stages in Sudan.

Not only that, but the Brotherhood party has planned many Sudanese Political Intrigues, since its inception in the forties according to a conspiracy theory through which it built the Muslim Brother's Conspiracy Theory to implement its interim policies, and where the party led the stages of democracy in Sudan to a dead end with the sectarian parties.

Then it blamed the sectarian parties for the deterioration of Sudan to enable the army to strike democracy by military coups at every stage and almost every decade. When that resulted into changes between democracy and dictatorship, more than once, the party with the third penultimate version of it which has taken as the National Islamic Front (NIF) orchestrated the last military coup in 1989 to bring Omar al-Bashir with other elements of the Muslim Brothers in the army to power and to continue in power for thirty years.

The Muslim Brothers are Leading the Sudanese Political Intrigues Forward!

When the Sudanese people continued to stage the Sudanese intifada, the party shifted policies using the same Muslim Brothers' octopus arms to create another arm called the People's Conference Party to claim that it opposes the National Congress Party in power.

When the Sudanese protests continued, the party chose to be in the opposition further to deceive the masses. When the Sudanese revolution witnessed some progress and the party knew that great knowledge about its plans have been distributed by Sudanese intellectuals to the people, the party played to clutch the activities of the Sudanese rising people.

When the Sudanese uprising people entered the headquarters of the army and achieved the sit-in there, all the Muslim Brothers came again together to support the Transitional Military Council that has emerged to assume power after the fall of the regime to preserve the infrastructure of the collapsed regime.

Not only that, but they support the Janjaweed forces, which has taken the name of the rapid support forces during Omar al-Bashir's totalitarian regime. This is because they have established the Janjaweed from foreign mercenaries while they were leading that military religious regime to commit the genocide in Darfur.

They support them still and they planned the people's massacres that have occurred on June 03, 2019 during the people's sit-in in the army general command, where they have killed thousands of people, some of whom being burned alive, thrown while tied with heavy materials to be drown alive and raped many women, including child girls and grandmas.

Undone numerically episode, like this one you are reading now titled Sudanese Claims, with its Arabic version at Sudanese Political Claims.

Let's Know What You Think about the Sudanese Political Intrigues!

You can use the following form to write comments on Sudanese Political Intrigues and share what you write always.

You can also watch Sudanese documentaries including Sudanese Political Intrigues on documentary film at TVCinemaApp.com.